Beavers Hold Off Cougars In Battle Of Two Halves

Share All sharing options for: Beavers Hold Off Cougars In Battle Of Two Halves 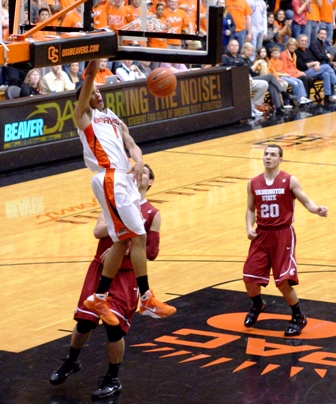 It will go down as a wire to wire win for Oregon St., but that doesn't begin to tell the story.

Oregon St. dominated Washington St. in the first half, twice taking 18 point leads, while holding the Cougars to just four made shots, and 15 points. Jared Cunningham (1, l.), who led all scorers, had 15 of his 20 points in the first half, including a layin at the buzzer that gave the Beavers a 33-15 lead.

Oregon St. jumped out to an 11-2 lead in the first four and a half minutes, and after Washington St. rallied to within 13-11, the Beavers ran off a 20-4 stretch to the break.

And when Cunningham opened the games largest lead, 19 points, to start the second half, it the Cougars were on the verge of being run out of Gill Coliseum. But the Beavers couldn't quite push them all the way out, and Washington St. shot their way back into the game.

Klay Thompson, who had been held to just two points in the first half, hit a three pointer to start an 8-0 spurt, and in a matter of three and a half minutes the Cougars made a 19-5 run to pull back within 38-34.

Washington St. effectively hit five three pointers, with Thompson sinking three of the four that went down, and Reggie Moore made all three shots from the line after being fouled on his three pointer.

The Cougars climbed within one point in DeAngelo Casto's free throw that made it 40-39 with just under 12 minutes left.

Lathan Wallace started a 7-0 OSU run to temporarily fend off the WSU rally with a three pointer, and then a steal and assist to Cunningham for a dunk that was the freshman's only field goal of the second half.

Meanwhile, the Oregon St. defense held Washington St. scoreless for four and a half minutes. 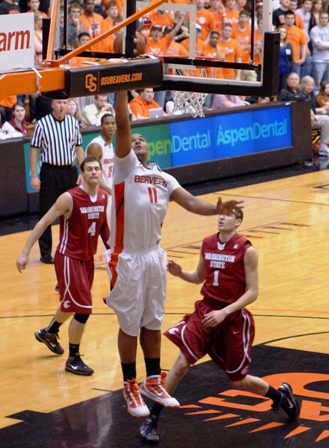 The Beaver bench was crucial to the outcome, as Joe Burton (11, l.), who had eight points and seven rebounds on the night, opened the lead to eight points, and after Casto's jumper stopped the Oregon St. run, Omari Johnson grabbed the offensive rebound off Wallace's missed three point attempt, and the putback basket.

Kevin McShane also had a solid defensive game, saving several points, which would turn out to be critical.

Cunningham also saved a possession by out-racing Casto into backcourt for a loose ball.

"When Jared lost the ball, and then ran back down and stole it back, big play," Oregon St. coach Craig Robinson observed. "When we missed the foul shot and Roeland tipped it back out, and we had a chance to get it back out, big play. Joe Burton sees the shot clock is running down, so he tries to draw foul, and the shot goes in. It was play after play. We just toughed it out there in the end and some games you just have to win with toughness."

"Jared is finally understanding how to use his speed and covering ability. By understanding what Seth (Tarver) is doing in order to get those steals, and eight steals is a lot of steals."

Burton noted that "(Klay) Thompson was hitting those shots and they came back, and we just had to calm down and play our game; basically just buckle down and keep our composure and go from there." During the time out after the Cougar''s big run, Burton explained that coach Robinson "Just told us to keep our poise, and just play our game. Don't get in a run in, fast break. We had to get a couple stops, and just play our game."

Moore, who missed all eight shots he took from the field, made two more free throws, on his way to a 10 of 12 night at the line, where all his points came from, but Burton responded by making Oregon St.'s next two baskets. 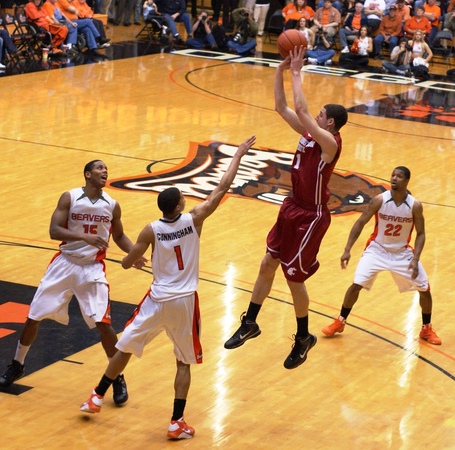 Roeland Schaftenaar capped his ten point night with a turnaround shot off the glass, but Moore made two more free throws to keep the Cougars within one point.

Cunningham missed a chance to at least start to nail the game down for the Beavers by missing at the line, but Seth Tarver grabbed the offensive rebound, drew a foul, and dropped in both shots with 26 seconds left.

Free throwing had been the Cougars' ace in the hole, as WSU made 19 of 23 at the line, 87%, while OSU had made only eight of 21 free throw shots up to that point.

After Moore cut the Beaver lead to two points with 10 seconds left, he finally missed one, and Cunningham didn't, putting the game out of reach of any last gasp three pointer with two free throws with two seconds left.

"I don't think we have ever been up by 18 in the first half of a Pac-10 game in recent memory," Robinson said afterwards. "I was thinking how are we going to mess this up, because we have never been here before? We tried to prepare them for the rally. After they came back and we started to pull away, I thought for the first time this season, we are actually maturing and feeling confident about ourselves. We went right back to work after that one slide, and it was great to see."

Washington St. coach Ken Bone realized the Cougars simply dug themselves into too deep of a hole early on.

"When you turn it over 15 times in the first half, you kind of set yourself up (to lose)," Bone said. "And a number of those turnovers also led to easy baskets for Oregon State. It wasn't just the turnover, it was the easy layup or dunk on the other end. That hurts."

The game was allowed to be played very physically, which would not have favored the Cougars had they not shot so well at the line. The lasting image though, wasn't of one of the many flailing battles on the floor, but rather, of both Washington St. coach Bone and Oregon St.'s coach Robinson standing out on the floor, arms crossed, and shaking their heads at the officials, at the same time.

Just one of the things you miss by not being at non-televised games. 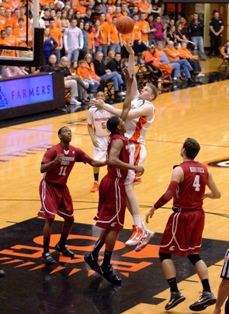 The crowd of 6,507 was a little on the small side, considering the stakes, where the winner would avoid having to play on the first day of the Pac-10 tournament, even for a week night, especially with no TV.

But with the possible exception of the Ducks game, and pending Saturday's senior day finale against Washington, it was probably the best crowd of the season, as far as noise and energy goes.

With the Beavers playing well early, the crowd stayed in the game, helped play defense in the second half, and sparked the surge that held off the Cougar rally.

"We are in fifth place, and will do no worse that seventh place, and that is so huge," Robinson noted. "Now we don't have to play the first night. For these guys in this locker room, to put together back to back years like this, and have one more win in the conference than they did last year, that is legacy making. It means a lot to those guys, and I want it to mean a lot to them, because they have done nothing but do what we have asked them to do. Now it puts us in a position, if we can win on Saturday, then we can end up in the top half, maybe tied for fourth or for third in the league. I mean, that's outstanding."

Cunningham added "We're going to miss the seniors. They've all showed us a lot of things this year, and have taken us under their wing. We're just going to dedicate the game (Saturday) to them, and get the win."

Washington visits Gill Coliseum at 5 PM Saturday, and the game will be carried on Fox Sports Northwest.