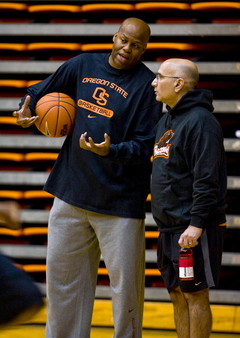 Oregon St. mens' basketball coach Craig Robinson has agreed in principal to a two year contract extension, according to Athletics Director Bob De Carolis. The contract extension to his deal that originally extended thru the 2013-2014 season, will ensure that Robinson will (probably) be on the sidelines for Oregon State through the 2015-2016 season.

"I'd like to thank President Ed Ray and Bob De Carolis for their commitment to me, our program and Oregon State," Robinson said. "This extension represents a mutual commitment to the future of Oregon State men's basketball. We will continue to recruit the best student-athletes, invest in our facilities and build a successful team on and off the court. We have ambitious goals and look forward to returning the Oregon State basketball program to prominence."

The exact terms of the contract will be finalized and released in the near future, according to De Carolis.

"Since his arrival, Craig Robinson has done an outstanding job of instilling a work ethic within the program, which has allowed our student-athletes to improve on and off the court," De Carolis said. "He has shown a keen understanding of how to build a program the right way, and has already made significant strides in restoring the proud tradition of Oregon State men's basketball. This new agreement ensures his leadership will be felt for a long time and adds continued stability to the program."