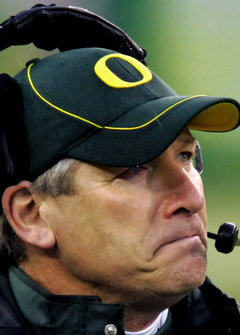 In a hastily called news conference late this morning, University of Oregon Athletic Director Mike Bellotti announced his resignation. His last day will be April 5, though he will remain available throughout the month to assist with a transition.

Bellotti, who clearly enjoyed doing football color commentary  this past season on Comcast broadcasts of University of Oregon games, is leaving to take a position as a football analyst for ESPN. His first game will be the Auburn spring game on April 17.

Bellotti, who will continue to live in Eugene, admitted the timing of this move isn't good, but made it clear that he isn't "running from things," referring to the turmoil swirling around the Ducks' football program, or the recent non-renewal of basketball coach Ernie Kent's contract.

Bellotti has been the University of Oregon since joining then coach Rich Brooks' staff in 1989, and was the head coach for 14 seasons, 1996-2009, before becoming the Athletic Director last year.

The executive search firm SpencerStuart will be retained to find Oregon's next men's basketball coach.

University of Oregon President Richard Lariviere will appoint an interim athletic director soon, with a national search to be conducted after that.

It was apparently an opportunity Bellotti felt he couldn't pass up to do something he truly enjoys, and avoid the necessary evils of the Athletic Director's job such as budgeting and personnel matters.

The implications on in-state and Pac-10 athletics will be interesting to say the least.