Terriers Too Scrappy For Beavers

Share All sharing options for: Terriers Too Scrappy For Beavers

Despite a career-high 21 points from Jared Cunningham (1, l.), the Boston University Terriers out-scrapped the Oregon St. Beavers 96-78 in the first round of the College Basketball Tournament Wednesday night at Gill Coliseum in Corvallis.

Most of the damage came late in the first half, when the Terriers outscored the CBI defending champion Beavers with a 23-4 run, and taking a 46-27 halftime lead. Oregon St. had opened the game fast, jumping to a 5-0 lead, but Boston U., from the American East Conference, responded quickly, racing to a pair of four point leads themselves.

Oregon St. battled back, and it looked like it might be a back and forth game, until the Terries went on a tear to open a 20 point lead just before halftime.

Trailing just 19-17 with 11:22 left in the first half, the Beavers watched the Terriers blow the game open, taking a 21 point lead in less than eight minutes. 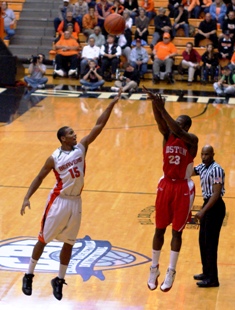 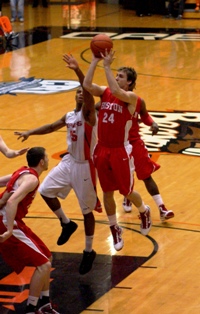 "They played more aggressively than we did," Cunningham felt. "They got a couple dunks and they were knocking down their shots and doing what they had to do."

The Terriers shot effectively from long range, eventually connecting on a dozen three pointers. Holland had four, and Tyler Morris (24, l.), who finished with 18 points, was four for four from outside.

Boston U. was also very effective in transition, especially off turnovers, whether it be to the rim, or kicking out for open three pointers.

Officiating was a factor in the run as well. I say that not as an excuse for Oregon St.'s loss, but rather, to note a contrast in style of play that it took a while for the Beavers to adjust too, since, with no TV, only those in the crowd of just under 3,000 in the midst of finals week saw the specifics.

While there were a couple of mistakes on possession calls, and one missed 10 second call, what swung the game was the outcome of a number of physical battles inside.

Pac-10 teams, used to the way Pac-10 officials call games, often struggle come post season to adjust to the different way the game is played in much of the country. Tonight, the game was played quite physically on the baseline, and out to about ten feet, and it was played from the baseline out, rather than crashing in from the outside. Positioning was critical.

Though Oregon St. eventually out-rebounded Boston U. 37-33, during the run, the Terriers got a number of critical rebounds. Several of the dozen first half Oregon St. turnovers came out of the Beavers' early struggles with ball movement and penetration as well.

Compounding the problem was a number of missed shots by Oregon St. It was a team-wide problem, and they were shots that a fair number of which generally fall. Certainly shots Coach Craig Robinson would have the green light on for all the time, but tonight, they were tending to rim out.

Once the Beavers did adjust, they overall played the Terries about even, though Boston U. again surged midway in the second half, taking the games' largest lead, 28 points, 85-57, with six and a half minutes left. 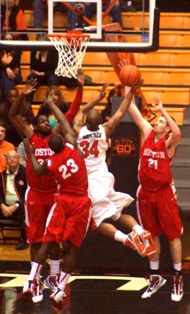 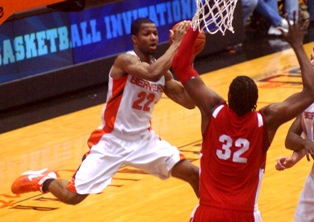 The Beavers got a second half boost from Lathan Wallace (34, l.), who scored ten straight points for Oregon St. at one point, and all 15 of his points came after the break. His total contained a pair of three pointers, and Calvin Haynes (22, r.) also finished with 15 points, and three three pointers.

"We just wanted to make everyone proud, and tried to play as hard as we could," Cunningham said."Tonight just wasn't our night. Unfortunately it was the end of the season and for the seniors, they're done." 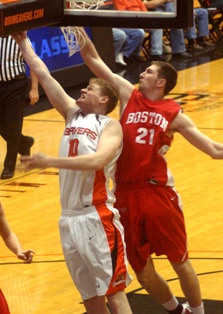 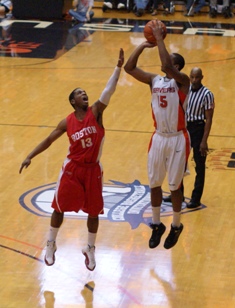 Roeland Schaftenaar (10, l., scoring against Jake O'Brien) concluded his Oregon St. career with 12 points, and Seth Tarver (r., making his last three pointer as a Beaver over Corey Lowe) had seven points in his last game as a Beaver.

Boston U. finished with five players in double figures, getting 22 from Carlos Strong, 11 from Jake O'Brien, and 12 from Corey Lowe off the bench. And while the Terriers' fifth starter, Jeff Pelage, only had five points, he had a game high 10 rebounds.

Boston University head coach Patrick Chambers discussed how the Terriers were able to break down Oregon State's zone defense, explaining "I watched a ton of tape. It's a scary zone. We were trying to take Seth Tarver out of the game. We did a good job of it. Our guys played hard."

The 96 points were a season high for Boston U., who improved to 20-13 for the season, and had an 11-5 conference record. It was also the second highest total points, behind only the Seattle University game, that the Beavers allowed.

The Terriers exposed two problems in running up the impressive score. Much of the time, there would be one or two Beavers actually doing a pretty good defensive job, but against three or four Terriers.

Boston U. overmatched Oregon St.'s lack of overall team speed, as one or two Beavers would be trailing plays too far to be able to get back into the play. And weak side defenders were frequently standing and watching, seemingly unsure who should do what when the Terriers would cross over.

"We were caught flat footed way too often," Robinson observed, "and I'm not sure why. It was a disappointing effort. Our effort was not what it should have been, and that is on me as a coach."

It was the third time the Terriers had taken on the Beavers, and their first win, having previously come west in 1985 and 1989 for the Far West Classic. Oregon St. won both those meetings.

"It's a great challenge to motivate young kids," Chambers said. "Everyone dreams of going to the NCAA tourney, and we were heartbroken for two days. But when we got invited to play here, I think we got energized again. We've got nine seniors, we don't want to be done yet, we want to keep playing. We had one of our best practices when we got here, for whatever reason. I think what it is, is that the guys like each other and they want to keep playing." 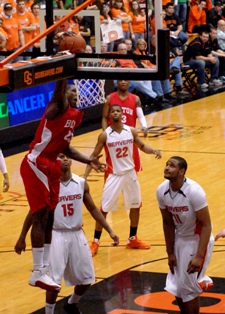 "We wanted to be together and keep playing," Holland (l, 23, dunking for two of his game high 26 points) added. "We know it's not the NCAAs or anything, but anytime we step on the floor, we want to play hard."

It was also the first post season win for the Terriers since reaching the elite eight in 1959, before running into West Virginia, and a guard named Jerry West. The Terriers will next face the Morehead St. Eagles, who downed the ColoradoSt. Rams 74-60 tonight, on Monday.

"I am optimistic about the future, though, I am excited about the future, and I think things can be really good here," Robinson added. "There has to be a lot of development over the spring, summer, and the fall again. We have to really take advantage of the players that we have coming in. It's very exciting to see Jared (Cunningham), Joe (Burton), and Angus (Brandt) being at the level that we need them to be." 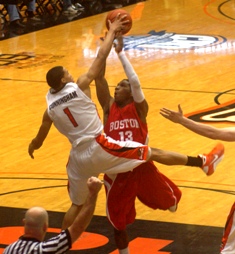 Jared Cunningham (1) appears to have gotten all ball

Cunningham will be counted on to spearhead the 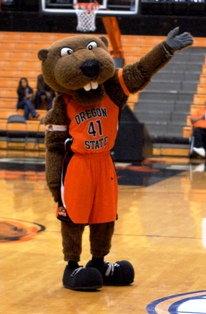