Share All sharing options for: Oh My Omari! Johnson Leads Beavers Past Ducks 62-42 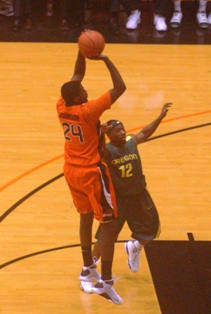 Omari Johnson had 16 of his season high, and game leading, 18 points in the first half, which helped Oregon St. jump out to a 32-25 halftime lead over Oregon. Then the Beaver's 1-3-1 zone defense that had held Oregon without a field goal for over six minutes to start the game took over.

Only a Matthew Humphrey three pointer interrupted what was an otherwise eight minute scoring drought for the Ducks. Meanwhile the Beavers built a 14 point, 47-33 lead.

Another three and a half minute Oregon scoring dry spell followed, and with five minutes left in the game, Oregon St. had run off a 27-9 stretch, and taken their largest lead of the game, up 25 points, 59-34.

The Beavers coasted home to the 20 point win that was their largest margin of victory over the Ducks in 28 years, since a 43 point win in 1982. The win also gave Oregon St. their first sweep of the basketball Civil War in 17 seasons.

How did they do it? With an offensive approach that would have made Ralph Miller proud, and certainly met with the approval of the 40+ former Beaver players introduced to the crowd of 9,134, the largest of the season. Oregon St. had an assist on twenty of their twenty one baskets, and they did so against a zone defense. "Unheard of," Oregon St. coach Craig Robinson said.

"I don't even think I can say the word ‘blowout,'" Robinson added. "We haven't had a win like that in a conference game since I've been here."

Johnson hit four of his first five three pointers in the first half. And when Oregon answered Oregon St.'s 10-0 fast start with their own 15-5 run to take their last lead at 19-18, Johnson answered with a three pointer.

"Coach (Robinson) told me I shouldn't worry about taking shots," Johnson said. "He tole me, if I'm going to take one, I might as well make it. I agree with him!"

And, as noted, with a defensive effort that confused and frustrated Oregon all night. Oregon St. held Oregon's top scorer, Tajuan Porter, to just three points, and allowed no one more than ten points. Even Duck fans were heard to repeatedly comment "These guys really play defense!" 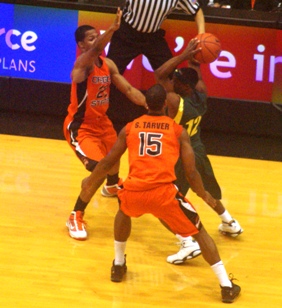 Oregon St. held Oregon to under 30% shooting from the field, and just 24% in the second half.

Seth Tarver's size, and even Johnson's, when he took a shift in relief of Tarver at the point of the OSU defense, caused the smaller Duck guards Porter and Malcolm Armstead endless matchup problems.

"I thought (the Beavers) really played up for the game," Oregon coach Ernie Kent said afterwards. "What they did to us, is what we did last week. I thought they made it one dimensional, they live and die on the perimeter. I thought they did an excellent job of playing up in a rivalry game. That might be for a number of reasons, more vets or whatever, but they played up. They've been through a lot over here." 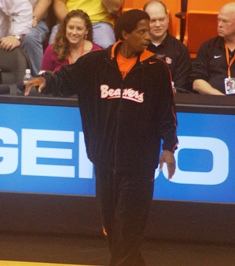 Robinson attributed the effort to preparation, noting "This was a wonderful performance, and it was a product of a great week in practice. It was special to see the guys (including A.C. Green, l.) play a game up to the standards of a lot of those former players. Those guys, and some of these fans, have seen a lot of great basketball over the years."

Jared Cunningham and Calvin Haynes added 11 points apiece for Oregon St. But the decision to start, and heavily utilize, Johnson was the key to the game. Johnson deserves credit for getting the job done, but Robinson gets the credit for a move no one, including Kent, saw coming.

At this point, no matter how well Seth Tarver, who had nine points and five rebounds, plays, there is nothing he will do that Kent hasn't seen, and worked on. But while Robinson capitalized on a full week's practice, guaranteed Kent spent zero minutes working on a defense to specifically shut down Johnson. 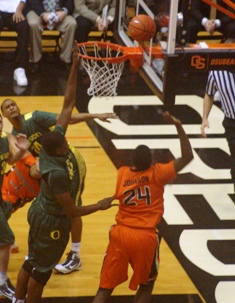 "We've been trying to find somebody at that spot," Robinson said. "You can call it the four, we call it the forward on the left side of the court, who can give us something. Omari (24, r.) has had that in him all season. I think at the beginning of the season, I said that he was the guy who was practicing the best, and had made the most progress. This week, he was the one who practiced the best, and it carried over into the game."

Cunningham started strong, and had nine of his 11 points in the first half. The freshman also had a crowd-raising dunk four minutes into the second half that opened a nine point lead, and energized the Oregon St. run that left the Ducks in the dust.

Foul trouble again forced Robinson to limit Cunningham's minutes as the game wore on, though.

"Jared plays with great aggression," Robinson noted. "We need that, but I couldn't trust him to not get in further foul trouble."

Robinson's next coaching step will need to be to not reign in Cunningham, easily the most electric of the Beavers, but rather, to tune his game, and teach the tricks that will allow him to continue to be aggressive without fouling.

Tarver and Roeland Schaftenaar both just missed making it into double digits, with nine points each. Schaftenaar added four rebounds, but some strong ones early, plus a willingness to hit the floor fighting for the ball infused energy into Oregon St. Tarver also had five rebounds, two assists, and a block, but it was his "senior-esque" ability to make key plays at key times that shined tonight.

As the game wound down, and the margin of victory was evidently going to be big, the Oregon St. band started the chant "Goodbye Ernie!", which raises the question of whether this will be Kent's last visit to Gill. When you are not heading for tournament play, it is not good to not beat your in-state rival, and frustrated Duck fans were reduced to arguing with each other about the future of their coach, who has now lost in his last two trips to Corvallis, and in three of the last four Civil War contests. 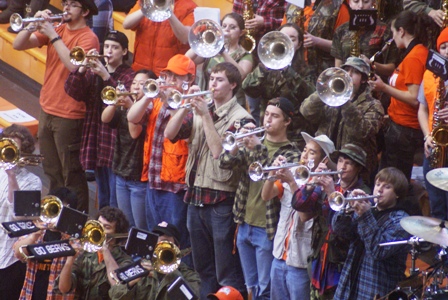 The Oregon St. Band was prepared for a Duck hunting trip. And the Beavers filled their bag limit. 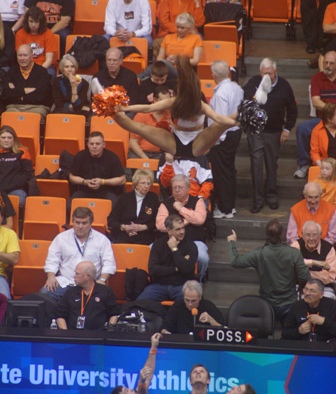 By halftime, the Oregon St. cheerleaders, like all the Beavers, were already flying high.

Oregon St.'s win in the 333rd. edition of the most contested rivalry in the NCAA gave the Beavers a 183-150 edge in the series. 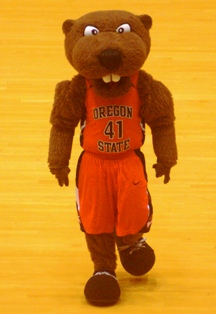 And Benny was all smiles!

Both teams head to Arizona this week. The Beavers open the trip to the desert Thursday night at 5:30 in Tempe, against Arizona St., and conclude the trip Saturday at 5 PM in Tucson, against Arizona. Both the Sun Devils and the Wildcats will start the week one and a half games ahead of the Beavers and the Ducks in the tight Pac-10 race, two of five teams tied for second with 6-5 records, behind the conference leading Cal Bears, who are 7-4. All ten teams are within three games of each other. There is no scheduled television broadcast of the Arizona St. game. Update: Radio and local in Arizona TV for Saturday's game will be augmented by coverage on Fox College Sports Pacific. Availability varies depending on cable/satellite provider and package.