Beavers Bounce Back To Sweep Trojans

Share All sharing options for: Beavers Bounce Back To Sweep Trojans 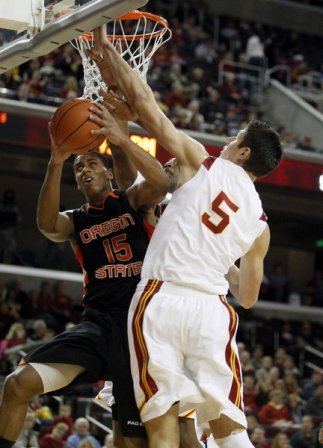 Oregon St. bounced back from back to back losses, and an 11 point first half deficit, to defeat USC 49-44 Saturday evening at the Galen Center.

Seth Tarver (15, l. [AP Photo]) led everyone, with 14 points, and Roeland Schaftenaar, who had had another frustrating night, stepped up to the line literally and figuratively, and made all four of his free throws in the last minute of the game to seal the win.

Early on it looked like the Beavers were bound for their third straight loss, as the Trojans went on an 18-5 run to open an 21-10 lead.

But the Tarver brothers Seth and Josh answered with a seven point run of their own.

OSU had a chance to cut the deficit to two, but turned the ball over, and USC's Mike Gerrity, who led the Trojans with 13 points stopped the run briefly with a layup. It didn't deter the Tarvers though, and Josh answered with a dunk.

Omari Johnson's three pointer and another bucket by Seth pulled the Beavers within 25-24 at halftime.

Calvin Haynes' layup to open the second half scoring put the Beavers ahead, and they never trailed again.

The Trojans stayed close the whole way, however. Josh Tarver gave the Beavers their largest lead, 42-37 with six and a half minutes left, but the Trojans twice pulled back within two points, first on a Marcus Johnson free throw, and then after Schaftenaar's first two free throws, on a basket by Garrity with 34 seconds left, to make the score 46-44.

Schaftenaar dropped in another pair, and USC missed their last three shots of the game, and suffered their third straight loss as a result.

The Beavers had an opportunity to keep the Trojans at further at bay, but up 49-44, after Josh Tarver stole the ball from Donte Smith and fed Seth, who was all alone under the basket, Seth missed, and USC stayed alive.

"I guess I rushed it," Seth Tarver said afterwards.

"That's exactly what I thought!  (Assistant coach) Nate (Pomeday) told me to hang in there, because at that point, I was completely demoralized.''

Poor shooting in the face of defensive pressure was the theme of the game. Oregon St. shot just 40% for the game, and made only one of eleven three point shots. But USC was much worse, shooting only 32% in the first half, and then falling off to hit only 25% of their second half shots.

"Once we got a couple stops we started getting back to our cuts and started making a few shots and drives to the basket,'' said Robinson.

The Oregon St. 1-3-1 zone defense, with Seth Tarver operating at the top, forced USC into 20 turnovers, four on steals by Josh Tarver.

"We know their personnel. We know them,'' Seth Tarver said. "We can kind of make them do what we want them to do.''

Beaver free throw shooting bounced back as well, and saved the day, as Seth Tarver's layup for a 41-35 lead with over eight minutes left was Oregon St.'s last basket from the field.

Josh Tarver made three straight from the line before Schaftenaar's four, and Seth Tarver capped what would be eight straight free throws for the Beavers. Prior to that, Oregon St. had only been four of ten from the line.

The Cougars visit Gill Coliseum Thursday night at 7 PM, in a crucial game for the Beavers for positioning for the Pac-10 tournament. Oregon St. can still finish as high as a tie for third in the conference regular season, or fall all the way to last place. Or, land anywhere in between.