Share All sharing options for: Bruins Hold Off Beavers 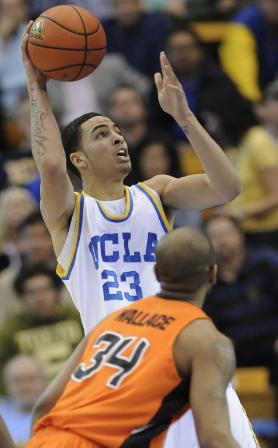 Oregon St. rallied from ten points down to pull with one point with less than five minutes left, but UCLA answered with a fast 5-0 run that gave the Bruins the margin they needed to pull out the win, and pull into a three way tie for third place in the Pac-10 race with Washington, and USC, who fell by a ten point 54-44 score to Oregon tonight.

UCLA played without Reeves Nelson, who had laser surgery to repair a partially detached retina in his left eye, and had a very black right eye on the Bruin bench, after a nasty, face first landing in last week's game at Washington St.

The Beavers pulled within 50-49 at the 4:22 mark when Roeland Schaftenaar's free throw completed a three point play, but Honeycutt hit a three pointer from the right side, and Malcolm Lee added a layup to reopen the lead to six points.

Calvin Haynes missed the next three shots for the Beavers, including two three pointers, and Lathan Wallace watched a three pointer roll out, and the Bruins kept at least a three point lead the rest of the game.

"We didn't have a knockout punch,'' Oregon St. coach Craig Robinson said. "I attribute that to not coming out and being ready to play.''

Oregon St. might have been playing without Schaftenaar, whose' only points in the game came on the three point combination, taken out of the game by the UCLA zone defense most of the night. 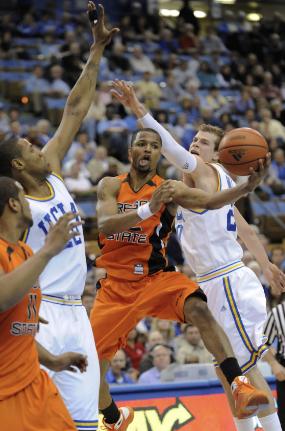 Haynes (r. [AP photo]) led Oregon St. with 14 points, and played with a lot of energy, but freshman Joe Burton had the best night of any of the Beavers, hitting five of ten shots, and finishing with 13 points. Burton completed a double double, with a dozen rebounds, half on each end of the floor, in a very balanced effort.

"Joe has been playing really well,'' said Robinson. "They were trying to defend him, but I think he was just doing a good job of getting what he wanted down there.''

Burton, from Hemet, CA, was playing his first game back in Southern California since graduating high school.

"This is my backyard, and I had a lot of people here to watch me,'' said Burton, who had his mom and several other family members in the stands. "I wanted to play hard and help us get a win. We fell a little short, though.''

Wallace wound up with 11 points, and the Bruins held Jared Cunningham and Seth Tarver to a combined 13 points. Tarver's miss on a late layin contributed to keeping UCLA ahead, and exemplified Oregon St's. evening-long offensive struggles.

Nikola Dragovic had 14 points for UCLA, all in the second half, and Lee finished with 13. The Bruins also played without Adam Keefe and Brendan Lane, and UCLA coach Ben Howland used only seven players.

"Usually, I make shots like those in my sleep,'' said Haynes, who connected on only four of 15 shots, of the Beavers' bad night.

With Nelson watching, the Beavers dominated the boards, pulling down 40 rebounds to just 24 by the Bruins. Getting 21 offensive boards would be good, except too many were because of missed shots, and due to more misses, the Beavers only got 18 second chance points out of those 21 opportunities.

Oregon St. did keep UCLA shut down with their defensive rebounding though, allowing only three points on second opportunities.

The Bruins were much better in the open court as well, with 16 points on fast breaks.

It was the eleventh straight win over Oregon St. for UCLA. The Beavers have only won five times ever at Pauley Pavilion, and just once since 1988. And a "Big win" for the Bruins, according to Howland.

UCLA (13-14, 8-7 in the Pac-10) was on the rebound from their worst loss in seven years, a 29 point, 97-68 drubbing last Saturday at Washington, while Oregon St. (12-15, 6-9) dropped into a tie with Washington St. for eighth place in the conference race, though the Cougars hold the tiebreaker over the Beavers at the moment for avoiding the extra play-in game at the Pac-10 tournament.