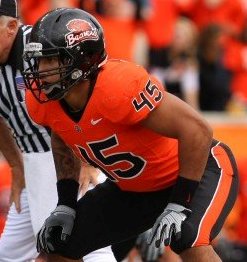 Oregon St. middle linebacker David Pa'aluhi has pulled out of school, in order to join the armed forces. Pa'aluhi, from Waianae, Hawaii, started all 13 games in the 2009 season as a sophomore, and was penciled in as the starter next season, until deciding to heed a higher calling.

Coach Mike Riley fully supports Pa'aluhi's decision, saying "We fully support David's decision," Riley said. "He's a terrific young man with a great future, and all of us in the Beaver football program thank him for his contributions and wish him the very best."

Pa'aluhi was an honorable mention all-Pac-10 selection, with 77 tackles, second high on the team, including eight for a loss. Pa'aluhi's two year tackle total was 96.

Tony Wilson, who was expected by many to start last season at middle linebacker until a season ending knee injury in spring ball, returns for the Beavers, who fortunately are deep at the position.

Oregon St. will now have to replace two starters in the linebacking corp, with the graduation of Keaton Kristick.

The Beavers still return two honorable mention all-conference performers in Dwight Roberson and Keith Pankey, as well as Devin and Kevin Unga, and Zane Norris, who is healthy again after being slowed by injuries last season.