Beavers Cleared To Compete For Track Championships, If They Qualify

Share All sharing options for: Beavers Cleared To Compete For Track Championships, If They Qualify

The Pac-10 Conference and the NCAA have granted Oregon State University's appeal to permit qualifying male student athletes to compete in the 2010 Pac-10 Conference Championship meet, and the Division I Track and Field (Indoor and Outdoor) meets.

The Beavers have eight football players doing extra training outside of their off-season football workouts to represent the Beavers at several meets. However, the university, not anticipating the group's interest coming to fruition, had not initially declared mens' track and field as a sport that Oregon St. would be fielding competitors in, hence the need for the special request.

Each athlete must post a sufficient qualifying mark to participate in these events, but redshirt freshman wide receiver Jordan Bishop cleared 7 feet 1/2 inch in the high jump at the Feb. 13 Husky Indoor Classic meet in Seattle, which is an NCAA provisional qualifying mark, pending further results. 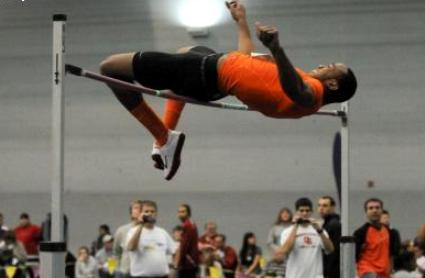 Bishop and fellow wide receiver Obum Gwacham are competing in the high jump, while Keynan Parker, James Rodgers and Rashaad Reynolds ran the 60 meters in Seattle, and Marcus Wheaton has been working out, but wasn't able to compete in Seattle, the Beavers' first appearance in a track meet with male student competitors since the 1988 NCAA Championships.

Jacquizz Rodgers and Kevan Walker are also participating in workouts, with an eye to future meets.

"It's exciting to again be eligible to compete in three of the very biggest NCAA meets," OSU track/cross country coach Kelly Sullivan said. "The ruling doesn't necessarily mean that we will have competitors qualify for the events, but it certainly opens up some great possibilities and goals for these exceptional student athletes."

The next date for the OSU men to compete is on March 6, in Seattle, at the Washington Qualifier meet. The NCAA Indoor Championships are March 12-13, at the University of Arkansas, should Bishop's provisional mark hold up, or others qualify.

The Pac-10 Championships will be May 15-16 in Berkley, at the University of California, after spring football practices have been completed (the Spring game is on May 1st.)

The NCAA Outdoor Championships on June 9-12 are just down the road at the University of Oregon in Eugene.