Share All sharing options for: Stanford Shoots Down OSU 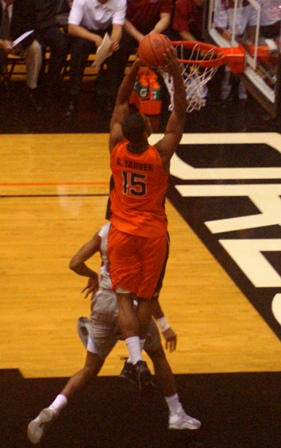 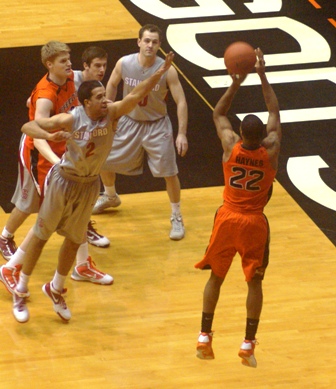 A good game came down to the fact that Stanford out-shot Oregon St. from the outside Saturday. The Cardinal connected on 9 of 18 from three point range, including five of seven in the second half, while the Beavers were only 4 of 14.

Calvin Haynes (l.) had a game high 21 points for Oregon St., but only Seth Tarver (dunking to the right) was able to join him in double digits, with 10 points.

Meanwhile, both Jeremy Green (5 of 10) and Drew Schiller (3 of 6) shot 50% from behind the arc, for all of their points. Landry fields drained six of eight free throws on his way to a double double, leading Stanford with 16 points, and everyone with 11 rebounds, and Jack Trotter was 5 of 6 from the field, and added 11 points for the Cardinal. Fields also swatted away three OSU shots.

After scoring 22 Thursday night against Cal, Roeland Schaftenaar was held to just eight points, and only two in the second half.

Neither team lead by more than four points in the hotly contested first half, and there were seven ties before Jared Cunningham game the Beavers a 30-28 halftime lead. 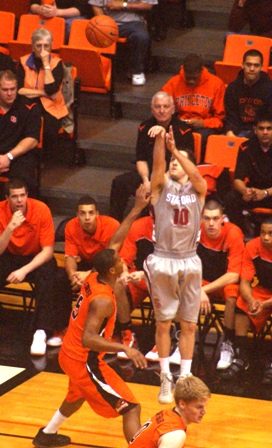 Oregon St. stayed close most of the way though, and Green's three pointer was the only points the Beaver defense allowed for the next four minutes. 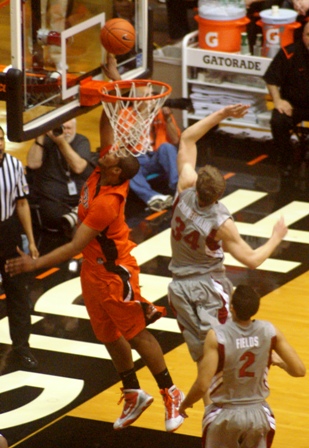 Fields had Stanford's next seven points, but a pair of Joe Burton (11, r.) baskets and a Lathan Wallace three pointer had OSU within 50-48 with over eight minutes left.

Burton had another strong game off the Beavers' bench, with seven points and five rebounds.

Stanford ran off a 6-0 run, and then, after a Haynes layup with five minutes left, Shiller drilled another three, and Haynes didn't.

The Beavers didn't get closer than six points the rest of the way, and the crowd of over 7,000 filed out into the sunny afternoon.

Oregon St. coach Craig Robinson attributed the lost opportunity, against a team that was below them in the standings, to inexperience.

"The conference is crazy, but this was an opportunity to do something that we have not done in a long time, which was to get to .500 this late in the season. What you saw out there was the lack of experience in doing that. To be able to win a game like this after you played so well after the past couple of games is learned behavior, and we have not been able to learn it yet. Maybe this is the kind of game that will wake us up, but I think we just needed the experience. The games will only get harder from here, they don't get easier."

After defeating Cal, most expected a fourth win this month, and a third in a row. But while Cal struggled against the OSU 1-3-1 defense, Stanford shot over it. One difference is that the Cardinal tend to get their three pointers off quicker after the catch of the pass than Cal does, and OSU rarely really was able to contest them.

Another was that Stanford kept Oregon St. out of their zone set at times.

Cardinal coach Johnny Dawkins felt "I thought we did a great job. First defending, we hold them to 55 points. They've been scoring the ball well recently, and we had to stop that. The 1-3-1 is basically set up on made shots. So when you can defend them, it's hard for them to get back in that 1-3-1 match up. A lot of that was our defense forcing them into that situation. But, when they are in it, it's very important that we were poised and take care of the basketball. Our main ball handlers all did a good job taking care of the ball and making the right decisions."

Haynes didn't feel the Beavers two double digit losses to Stanford can be attributed to match-ups.

"I don't really think it's a match-up problem. I think it's just coming out and getting key stops when we need to, rebounds and being able to get to their shooters. "Big players make big shots. Landry (Fields) came back in the second half and played an excellent game. And Jeremy (Green) had some big shots for them, so it was one of those things where we weren't aware of where their shooters were."

With Stanford shooting well, Oregon St. needed to match the offensive production, and didn't get the balance they needed.

"We had a lot of opportunities to score some easy baskets, which would have made the game harder for them. For whatever reason, we didn't handle the pressure of having to make those plays. I don't think it is a match up thing; I think this team may have our number. But you can't make as many mistakes against a team like this as we did today. This isn't a lower half team, they have won all their games at home, and they hadn't won on the road but now they have won two. I think we made way to many mistakes, and gave up too many easy baskets."

It was Stanford's first sweep of a road series in two years.

Each step from second thru ninth in the Pac-10 is just a half game, with two weeks before the Pac-10 tournament. 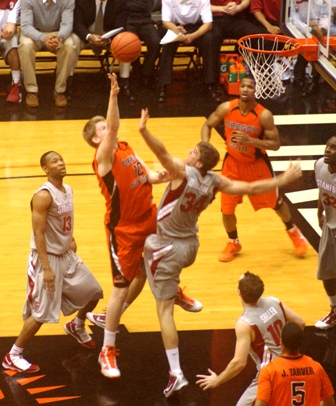 Roeland Schaftenaar scores two of his six first half points, but finished with just eight. 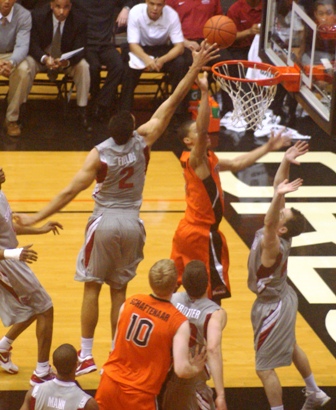 Oregon St. visits UCLA (12-14, 7-7) Thursday night at 8 PM. The game will be carried on the western region Fox Sports regional networks, including Fox Sports Northwest. The Bruins were blasted at Washington 97-68 tonight.

The Beavers will conclude their trip to Los Angeles at USC Saturday afternoon at 4:30 PM.