One That Got Away

Share All sharing options for: One That Got Away

Oregon St. lost an opportunity to snap their now 12 game losing streak against Arizona on "Pink Zone" night. The Beavers led most of the night, and when they took a nine point, 43-34 lead, the largest margin of the game, with 11:46 left on Talisa Rhea's first three pointer of the game, it looked like the best Oregon St. effort in a while would be rewarded.

But the Wildcats' Brooke Jackson answered with a three pointer of her own, starting a 9-0 Arizona run that erased everything Oregon St. had worked for.

The Beavers' Brittany Kennedy fouled Davellyn White on a three point attempt with 7:12 left, and White sank all three shots from the line to put the Wildcats ahead for good, 46-45.

Free throw shooting was crucial to the outcome, as Arizona got their last eight points at the line, and connected on 14 of 18 free throws (78 %). Oregon St. only took 14 free throws, and missed half of them. 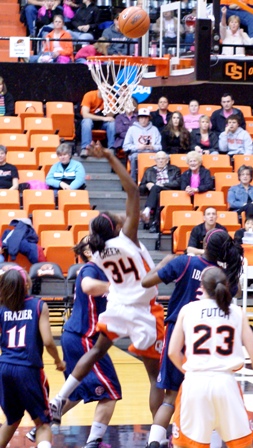 And it more than offset El Sara Greer's first career double double. Greer hit six of her seven shots, most of them off offensive rebounds, and finished with 14 points to go along with 15 rebounds, 12 on the offensive glass.

Overall Oregon St. outrebounded Arizona 37-23, and the ‘Cats only got four offensive boards.

The Beavers needed Greer's efforts, as they shot only 38% (23 of 61 shots), and 17% on three pointers. Oregon St. didn't connect from beyond the arc until Rhea's that built the nine point lead.

Rhea led Oregon St. with 16 points, but started off cold, missing multiple shots, and more notably, passed up a number of looks.

Haiden Palmer was the third Beaver in double digits, with 13 points, but she missed half of her six free throws, and ten of her 15 shots from the field. 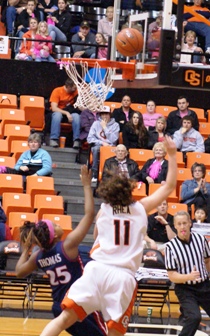 The announcement of the Oregon St. mens' landmark win over Arizona, and more importantly, how the Beavers won for the first time in 27 years in Tucson, with a solid defensive effort, came early in the first half, and energized the womens' team, and the crowd of just under 2,000 that nearly filled the lower third of Gill. It underscores just how much any given OSU team, and Beaver nation, seem to feed off the success of any other squad.

The Beavers proceeded to allow the ‘Cats just four points in the next eight minutes.

"We got closer to playing 40 minutes," Oregon State head coach LaVonda Wagner said. "I think we battled for about 35 minutes tonight, so we're getting closer. We did a great job on the boards, but in the second half they went to their inside game and our post defense wasn't what we needed it to be." 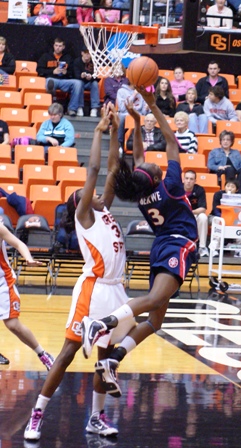 Much of that inside game came from Ify Ibekwe, (l. battling with Greer) who hit Arizona's first three baskets of the second half, and four of five, and also put the game out of reach with a pair of free throws with 30.4 seconds left.

There nothing "ify" about Ibekwe's (her first name is actually pronounced "Ee-fe") game, and Ibekwe's cross-over move is almost undefendable solo, if weak side support is not forthcoming.

Ibekwe was one of three ‘Cats finishing in double figures, with 13 points. Guards White and Reiko Thomas shared high-point honors for Arizona, with 14 points apiece. More importantly, White was five of five from the line, and Thomas six of seven, including a pair with 11 seconds left that concluded a 26-12 Wildcat run to close the game.

The Beavers had their best performance in three weeks, but Oregon St. (9-14, 1-11 in the Pac-10, and tied for 9th. place with Washington St.) still may have seen their hope of a return to the Women's NIT go by the boards with the loss, as they will need to run the table the rest of the season to get above .500 going into the Pac-10 Tournament.

The Beavers hit the road next week, for a pair of games in the Bay Area. The Beavers face California Thursday night at 7 PM, and move across the bay for a 7 PM game at Pac-10 leading Stanford Saturday. 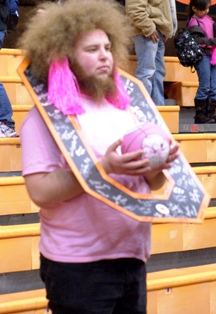 The Pink Pompoms also made for some interesting earrings.