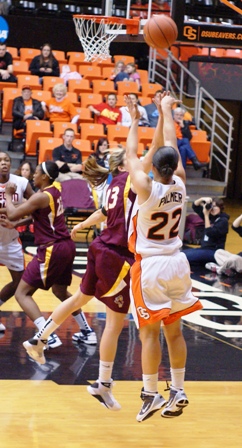 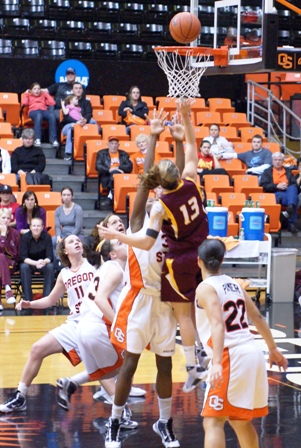 Oregon State's womens' hoops squad showed some life in the first half against Arizona St., but ultimately they again couldn't establish an inside game offensively, and never slowed down the Sun Devils' Danielle Orsillo (r., 13), who repeatedly drove unchecked on the right side of the lane, and finished with a game high 26 points, to lead the Sun Devils to a 62-49 win, and extend the Beavers' losing streak to 11 games.

Haiden Palmer (l. 32) hit eight of her ten shots, and lead the Beavers with 16 points, and Talisa Rhea added 12 points.

The Beavers trailed only 30-28 at halftime, despite the Sun Devils shooting 65% from the field, and then opened the second half with a 6-0 run.

"I felt like we played a very good first half," Oregon St. coach Lavonda Wagner said. "But in the second half, we obviously had a big letdown. We did not score for probably about four or five minutes, and that really hurt us. We need to find a way to play a 40 minute game. We have yet to put together 40 minutes of a game of basketball."

The Sun Devils answered with a 14-1 lead, taking a 44-35 lead with ten and a half minutes left. ASU settled into their half court defense, daring Oregon St. to either penetrate or hit from the outside, and the Beavers did neither.

Oregon St. scratched back within four points, down 51-47 with just over four minutes left, the last points coming on four straight made free throws by Rhea. The game turned as ASU's Kimberly Brandon scored bowling over El Sara Greer, and added a free throw. 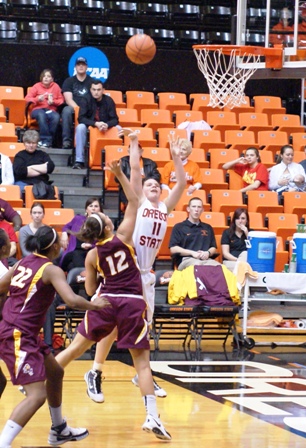 Talisa Rhea (11) scores over Alex Earl (12), who is from Southridge High in Beaverton.

Catching Up With The Beavers

When we last checked in on the lady Beavers, they had just dropped a 79-75 double overtime classic against Cal, and though they lost, they had played well, and appeared poised to break out of their then six game losing streak.

By the time the Beavers returned to Gill Coliseum, they were on a ten game losing streak, after losing all four games on their recent road trip. While Oregon St. was celebrating the mens' 20 point Civil War win over Oregon, the women were losing by 20 points to the Ducks in their last trip to Mac Court.

Despite double doubles by Kirsten Tilleman (her career fourth, 10 points and 13 rebounds) and Palmer (her first, 25 points and 11 rebounds), and 14 points by Rhea, the Beavers were never really in the game.

The Ducks opened the game with an 8-0 run, and led wire to wire, building a 17 point halftime lead, and extending it to 24 points on two occasions, behind 37 points from their backcourt duo of Taylor Lilley and Nia Jackson.

The week before, the Beavers took a trip to Los Angeles, and stopped off in Bakersfield on the way back. Both Pac-10 games were losses by over 20 points, as USC defeated Oregon St. 61-34, and UCLA followed up with a 70-44 trouncing of the Beavs.

Rhea was the only Beaver with more than seven points, with 16, against USC, while three Trojans were in double digits, led by Vancouver, Washington's Prairie high graduate Ashley Corral's 19 points. The Trojans also led wire to wire.

Oregon St. led most of the time until midway in the first half against UCLA, but then the Bruins took over. A 25-4 run made it 29-14 UCLA at halftime, and the Bruins twice built leads of 35 points before coasting to a 27 point win. Rhea and Palmer combined for 29 points, but the rest of the squad only contributed 15 points in 131 minutes of player time.

Oregon St. was at least competitive against independent Cal-St. Bakersfield, but the Beavers made only one free throw in the last 5:47 of the game, and the Roadrunners strolled away with the win.

Rhea had 17 points, and Julie Futch hit four of five three pointers, to finish with 14 points, but the Beavers gave up 26 points to guard Katie Williams. Most disappointing was for Oregon St. to lose despite out-rebounding the Roadrunners, who run a unique four guard system, 54-26, including 18-9 on the offensive glass.

What Does It Mean?

The Beavers are getting beaten on the perimeter, on both ends of the floor, and yet they continue to play as a perimeter team. Hesitation to make the entry pass much of the time usually prevents Tilleman from getting the ball before the defense is positioned.

The inability to take Arizona St.'s preferred weapon, Orsillo, away all night was troubling, as no adjustment was made for her continuing drives. It continued a pattern, as it was also guard play by USC, Bakersfield, and Oregon that won those games. Wagner seemingly has no answer for mismatches at the point.

Oregon St. is usually out-sized in most matchups, but that is not the case where Anita Burdick is concerned. However, there is precious little offense run through the bruising Burdick most nights. And tonight, when it was, the entry passes were abrupt and untimely, resulting in turnovers more often than points.

There are times when the Beavers assert themselves well. Tonight there were twice episodes of four point plays, where a basket was scored despite a foul, and though the free throw missed, an offensive board, tougher than ever on a missed free throw, now that everyone is slid up a slot above the block, and a second basket resulted.

In neither case was the big play leveraged into a lasting momentum change, though. The current plan seems to be to keep trying harder and harder to make certain things work, rather than adjusting to something different. 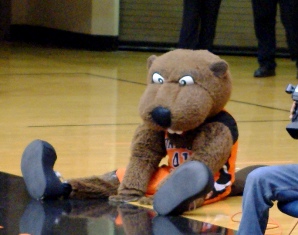 Even Benny was floored by the way things went.

Oregon St. returns to action Saturday night against Arizona (11-11, 5-7). The Wildcats fell 92-74 in Eugene against Oregon tonight. The game is Oregon State's 2010 "Pink Zone" game, where fans are encouraged to wear pink to the game to help bring awareness to the need to find a cure for breast cancer.