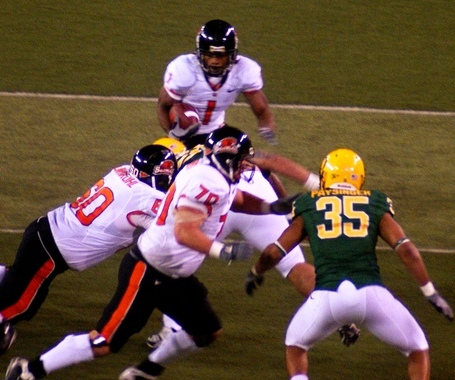 It's December, it's the Civil War, and its simple. For Oregon, win and you play for the National Championship. Lose and you go to the Rose Bowl. (Is there ANYONE in this state that ever thought they would see the Rose Bowl as a consolation prize for either team?) For Oregon St., win and you play again, and in a nice bowl game at that. Lose and the next time you take the field will be for the Spring Scrimmage. The stakes are decidedly different, but pretty high in both cases.

For the third year in a row, the Civil War will determine in one way or another who plays in the Rose Bowl, though it has no bearing on the Pac-10 Championship. Oregon St. would love to return the favor to the Ducks, who knocked the Beavers out of the Rose Bowl the last two seasons.

Coming off a 38-0 thrashing at Stanford, that seems like an improbable outcome for Oregon St., and that's before considering that Oregon clinched a BCS berth of some type with a 48-29 comeback win over Arizona.

The game is also the last push prior to the Heisman Trophy selection for Oregon's LaMichael James, the nation's leading rusher. It would be a convenient time for Oregon St.'s Jacquizz Rodgers to have a good game, in a showdown of the Pac-10's last two Freshman of the Year.

We'll be on hand, and have complete coverage, whether its of the completion of a perfect season, or the biggest upset in the history of the Civil War. Those watching on ABC and/or listening to either Mike Parker or Jerry Allen's call on the radio can chat here about the game, and both teams' futures as they become more clear.