The Beavers dropped to 4-5 on Wednesday after a 71-66 loss against the Montana Grizzlies. The game was played in front of 4,380 people, Montana's largest crowd of the season, at Dahlberg Arena.

Angus Brandt and Roberto Nelson led the Beavers with 13 points. Jared Cunningham and Calvin Haynes followed them with 10 points. 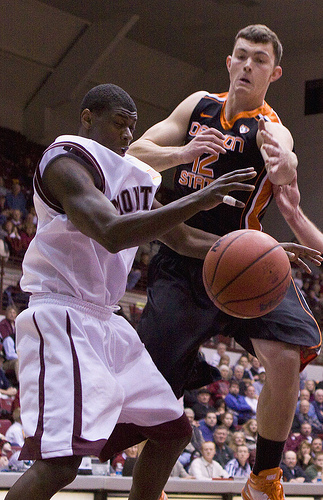 The game was tight all the way through, especially in the first half. Montana led by as many as 11 in the first twenty minutes, but Oregon State quietly cut away at the lead and eventually took a 30-29 advantage. But the Grizzlies would finish the half on a 6-2 run, and UM led 36-32 after the 1st Half. 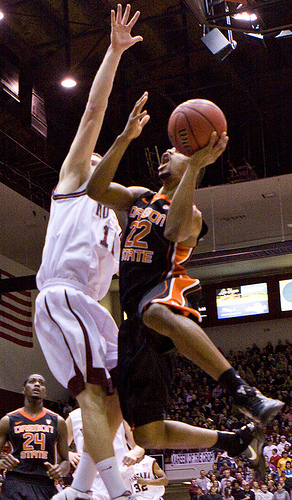 Calvin Haynes (22) goes up for a layup.
(Photo by Glenn Junkert, grizzlyjournal)

10 of 15 Beaver players got into the game. Omari Johnson, Joe Burton, Jared Cunningham, Ahmad Starks, and Devon Collier got the start for the Beavers.

For the Grizllies, Will Cherry led the way minutes-wise, with 39. Brian Qvale led Montana with 27 points, followed by Cherry with 22. The Grizzlies came into this game with a record of 5-4, inlcuding a win at UCLA.

Roberto Nelson was a bright spot for the Beavers though. In only his second game as a Beaver, Nelson scored 13 points coming off the bench. It is obvious that Nelson will be a go to guy once Pac-10 play starts later this month.

The Grizzlies led Oregon State in alomst every statistical category, except in 2nd chance points. Oregon State had 13 to Montana's 12.

Down by three at Halftime, the Beavers started the 2nd Half on a 4-0 run to take a 36-35 lead. The game went back and forth from there, with Montana slowly slowly taking control of the game. The Beavers hung around though, tying the game twice at 51 and 52. But good Defense by the Griz down the stretch and some more hot shooting ended up being too much for the Beavers.

With the loss, the Beavers dropped to 4-5 and Montana improved to 6-4.

As far as the crowd goes, the Big Sky TV announcer was very impressed with the turnout. I estimated about six Beaver Fans were in attendance.

Next up for the Beavers are the George Washington Colonials, Saturday at 4:30 PM in Corvallis, Oregon.