Share All sharing options for: Remembering The Giant Killers

With a line of 15 points in favor of the Ducks, it's clear most folks expect Oregon to win the Civil War. Nike, among others, aren't taking it for granted that their flagship team is a shoe-in though, as they chose this week as the time to furnish the Beavers with Pro-Combat uniforms that harken back to the Giant Killers of 1967. 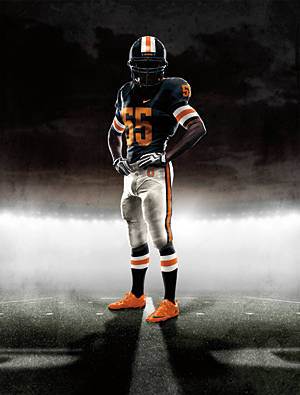 A #1 considered untouchable that had a top Heisman candidate ran into a spot of trouble that year too, against a bunch of guys who looked a little like this. There were no orange shoes that day, though.