Share All sharing options for: Connor's Thoughts on the Arizona State game

The Beavers defeated Arizona State 31-28 on a warm Saturday afternoon in Corvallis. Here are my thoughts on the game.

This was the Katz we've heard about. Ryan went 19 for 29, had 260 Yards, two touchdowns, and once again, no Interceptions. All of his throws were sharp and he utilized his best weapon: the short dump off to Quizz.

If Oregon State wants to make a run at the Rose Bowl, they'll need performances like this every week. I think Ryan is the guy that can get us there.

Jacquizz Rodgers finally had a breakout game with two touchdowns, 145 Yards, and 24 carries. He also broke off his longest run at Oregon State, a 74 yarder on the first play from scrimmage in the fourth quarter. Jacquizz looked like his old self, always falling forward, hiding behind his blockers, and finding impossible holes. He also had an 11 Yard reception out of the backfield. All in all, a great day for the younger brother.

Sometimes an injury is a good thing. In this case, it was. Every Oregon State reciever stepped up in the absence of James Rodgers. Jordan Bishop and Markus Wheaton led the way for the Beavers with four catches each. Bishop had 86 Yards and Wheaton had 48.

Aaron Nichols and Joe Halahuni each had three catches along with a touchdown a piece, and Darrel Catchings had 2 receptions for 10 Yards. Geno Munoz and Brady Camp round out the group, both having one catch. Munoz had a 9 yard reception and Camp had 2 yards.

All in all, that makes eight different Beavers with receptions.

I thought Coach Cavanaugh's bunch had their best game of the season. They gave Katz a bunch of time, giving up ZERO sacks, and they opened up some good holes for Quizz. Especially on Rodgers 74 Yarder.

It was great to see our Defense finally step up. They got pressure on the Quarterback, recording SIX sacks. And they intercepted Steven Threet three times. They also had greta coverage on deep balls, something that hasn't happened all year. There are still some things to work on, but Saturday was a big step in the right direction.

Once again, another incredible performance by our Special Teams Unit. We had 188 Yards on Kickoff and Punt Returns, and that's without James Rodgers.

Justin Kahut also had a great game, making all of his Extra Point and Field Goal attempts. His kickoffs were great as usual, with great hangtime and coverage on them.

Everything that was said about ASU before the game (Fast Defense, Good QB, Good Kicker) proved true when they actually kicked the ball off. This is a good Sun Devil team who just have caught some bad breaks this year. A bowl game is not out of the question, and I think that's what it will take for Erickson to keep his job.

For the second time this season, Reser Stadium was rocking. Instead of only on third downs, the crowd was loud the entire game, and it definitley got to ASU when they were down inside the five yard line.

Oh yeah, the U-S-A Chant was awesome as well.

Washington-The Huskeis defeated USC for the second year in a row on a last second Field Goal. ASU is up next.
Washington State-The Cougars gave UCLA all they could handle, but the Bruins came out victorious. UO is next.
Oregon-The Ducks proved that they were for real with a 52-31 dismantling of Stanford. They jumped BSU in the AP.
Oregon State-The Beavers improved to 2-2 with a 31-28 victory over ASU. Next up is a trip to the desert to face UA.
Stanford-The Cardinal got hammered 52-31 in Eugene. It doesn't get any easier as they host USC on Saturday.
USC-The Trojans lost a last second heartbreaker against the Huskies. Next up is a trip to Stanford.
UCLA-The Bruins got a scare from the Cougars, 42-28. Next up is a trip to Berkeley to face the Golden Bears.
Arizona State-The Sun Devils lost a third straight heart breaker, this one a 31-28 defeat in Corvallis.

Overall, this is a great win for Oregon State. Especially without James Rodgers. Everyone stepped up and pulled out a much needed victory.

It doesn't get any easier now, with a trip to Tucson on the horizon. However, if we get past the Wildcats, our schedule begins to lighten up just a bit, or as much as it can in the Pac-10. The team just needs to take it one game at a time though and good things will happen.

Who should be number two in this week's Power Poll?

Pictures after the break 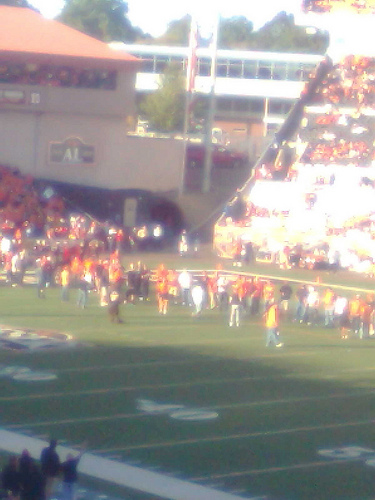 Members of the 2000 Fiesta Bowl Team. 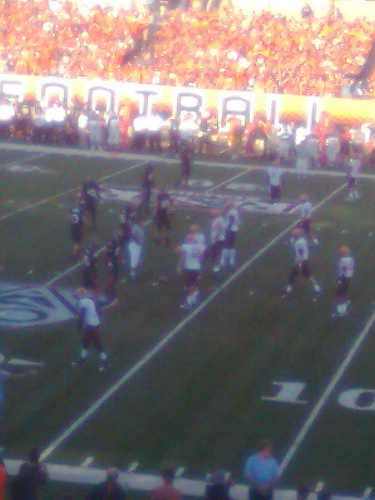 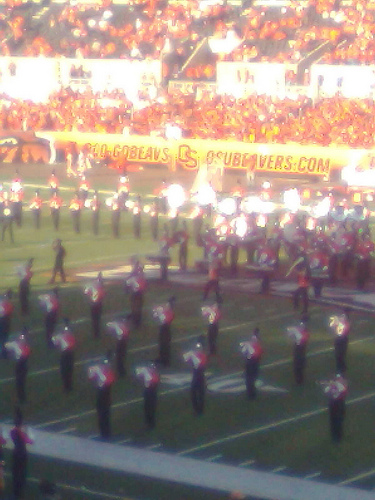 The best Marching Band in the nation.