What's Due, and What's Riley

Jacquizz Rodgers is due for a big game, and it is Homecoming in Corvallis, but then Cal is due to break thru against Oregon St.

Anytime ‘Quizz goes very long without having a huge game and the Beavers winning as a result, someone usually pays, especially someone not noted for consistent lane discipline. Forget the specifics of the formation, and review Cal against Nevada.

On the other hand, dominant streaks can only last so long. The Beavers own the Bears of late, having won three in a row, and 9 of 11. Add to that the fact that Cal is not only 0-3 on the road this year, the Bears haven't won a Pac-10 road game since their season opening trip to Pullman early in 2008. You have to think those trends come to an end at some point.

I think, however, that this game will come down to which Riley makes a difference, positive of negative.

If Cal QB Kevin Riley has a great game, and can approach 60% passing efficiency, the Bears have an excellent chance against the struggling Beaver secondary, and to break through their historic pattern against OSU.

Oregon St. coach Mike Riley on the other hand, last year's Las Vegas Bowl not withstanding, has a demonstrated track record of making good use, and his teams making good progress, in bye weeks. And Riley is well aware of the need to make some corrections, and not just because of the continued absence of James Rodgers, though this was the first opportunity to really deal with that.

It's not in Beaverton native Kevin Riley's nature historically to play to his maximum capability on a consistent basis. And for all their problems, the Oregon St. defense has played well at times. It's been when the opposing QB has been able to make them have to play well all game long that they at some points get into trouble.

Coach Mike Riley, and offensive coordinator Danny Langsdorf, stayed in Corvallis during the bye week, when much of the staff went recruiting, and Riley and Langsdorf normally would have too. They were working in detail on the details that have hampered Oregon St., who its worth remembering, despite a season's worth of mistakes and missed opportunities on Montlake, is a play away from being 3-0 in the Pac-10 race.

Coach Riley sometimes takes the long view, and in the process can have a game get away, from the team focus point of view. That's not the case this time. Also, Oregon St., three point favorites this week, have been covering on a consistent basis. Prediction: Oregon St. 34, Cal 30. 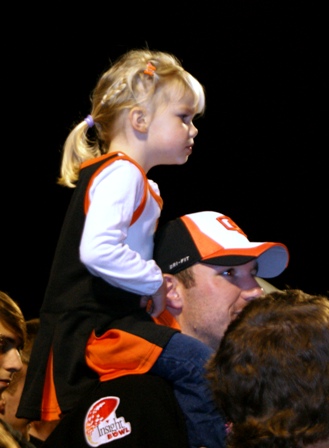 Have to be totally honest and with James going down in the UA game,  then especially with the poor showing at UW, and then the bye week my overall excitement for OSU football just went downhill.  So I have to admit I'm going to the game Saturday with the idea of having fun and seeing what the Beavs have learned from the week off.

Cliché alert:  I do feel this game is going to tell us a lot about the rest of the season, but I just don't have an idea of what to expect.  Yes we can talk about how Katz needs to rebound from the UW game, the offense needs to step it up, and find a killer sense of balance, and the defense needs to find itself all together. But I guess I'm just more about being reinvigorated in my excitement and looking forward to my homecoming to Corvallis this weekend.

I think that a football team is most dangerous after a bye week after a close loss. The Beavers will be eager to hit someone on the other team, and incredibly pumped up to play again. Not to mention that the Beavers control their own destiny for the Rose Bowl, so that should also help their mindset.

Even if California is at their best, I see the Beavers winning this one. Even though Katz is young, I guarantee that he will have a better game than against Washington. The key to this game however, will be the receivers. Aaron Nichols will have to have a big game in James Rodgers' place, and same with Jordan Bishop. If the Beavers hold Shane Verene to a reasonable amount of yards and force Kevin Riley to make a few mistakes, the Beavers should win this one.

there is a contest of some note Saturday evening in LA, and it will have a substantial impact on teams throughout the region.

Can #1 Oregon buck a couple of trends, of losing in LA, where they haven't won since 2000, and of a top ranked team losing on the road against a ranked opponent, which has now happened three weeks in a row? Can the Ducks overcome having lost three times in the last couple of years when facing a team with an extra week of preparation? Will USC exact revenge for last year's Halloween weekend disaster in Autzen?

If USC upsets Oregon, the chances of getting two Pac-10 teams into the BCS this year are drastically diminished. That carries a price tag of almost a half million dollars per conference school.

Whether the Trojans take a kit on recruiting effectiveness, or deliver a setback to the Ducks in luring future players, is also at stake, and that impacts the talent pool for everyone in the west.

Who is going to be on television, and when? Think this one won't affect that dollar and exposure detail?

So the affects of the game are even bigger than the game itself, which is huge enough.

The Coliseum crowd isn't always a big factor, but when it is, it can be overwhelming. I expect a game much like last year's Oregon St.-USC game, which went down to the wire.

Oregon's special teams is usually a huge advantage, but USC's aren't too bad, reducing one of the Duck's potential difference makers.

The Duck defense has also been a difference maker in large part because of their ability to create turnovers. Trojan QB Matt Barkley is tough to pressure, and even tougher to pick off, though, and has thrown 20 touchdowns, against only 4 interceptions.

The scholarship reduction on USC has impacted their depth and ability to practice a little, but most of the affect of the NCAA sanctions are still in the future. Still, it could show up in the late going, when Oregon's pace finally begins to force the Trojans into their depth.

This is likely the biggest obstacle in Oregon's path this season. The Trojans aren't about to pass the torch; it will have to be ripped away from them. Despite last season, this game feels like one where that issue will really be decided. Still, it seems as though Oregon has too much fire power, though a healthy Kenjon Barner would make the pick easier. Prediction: Oregon 41 USC 38.