Share All sharing options for: Pivotal Weekend For Beavers, Huskies 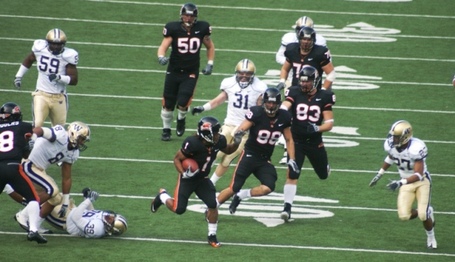 Saturday night at 7:15 is showdown time for both Oregon St. and Washington in Seattle, and the stakes may be about as high as ever. The 4 hour war in Husky stadium in 2000 that Washington won 33-30 was the "biggest" game in the ancient series that dates to 1897, but both teams were headed for BCS bowl wins and top five finishes.

This time, the 24th. ranked Beavers are concluding their toughest road trip of the year, after a 29-20 win over then 9th. ranked Arizona in Tucson, but despite being 2-0, and in second place in the Pac-10, are only 3-2 overall, thanks to two more tough road trips, losses to #4 TCU and #3 Boise St. And they are playing their first game not only without All-American WR/KR James Rodgers, but with the knowledge he won't be back in a week.

And the Huskies are coming off a 24-14 home loss to Arizona St. in what should have been Washington weather, a constant downpour pouring in off Lake Washington. It left them 2-3 for the season, and 1-1 in the Pac-10, in fourth place, with four road games left in the second half of the season. It's also the first of four consecutive games the Huskies have against ranked opponents. A loss would make even making it to bowl eligibility much tougher.

The winner still controls their Rose Bowl destiny, and more realistically, has a reasonable shot at one of the "good" bowls. The loser is looking at a lot of work just to get to the Las Vegas Bowl. The only word for that is sobering. And why the stakes are so high.

It would be a win of historically significant proportion for Oregon St., who enters the game 2-0 in the Pac-10 for the first time since 2003. When it was the Huskies that stopped the Beavers with a 38-17 win, also in Seattle. A win that was critical in avoiding what would have been a losing season, as Washington wound up 6-6 that season.

It could/should be the biggest game of the season in Seattle, crowd intensity wise, with the game being Homecoming for the Huskies, who were on the road for USC, and will also go to NW rivals Oregon, and Washington St. for the Apple Cup.

Beaver Nation will counter the Huskies with a healthy dose of their own intensity. Oregon St. will have their largest road contingent of the year in town, as always happens for both teams when they are the visitor in the rivalry game. (Visitor tickets for rivalry games, and all games at Autzen Stadium are too few and far between, and it's the easiest road trip for both fan bases.) The energy level will ramp up with the battle of the bands, and escalate from there until one team deflates the other.

That classic college football atmosphere ties in with what should be a shootout. Oregon St. comes in 90th. in the nation in total defense, and Washington is worse, at #104. So a 16-13 quarter is more likely than that for a final score is.

Even without James Rodgers, Oregon St. should still score with some consistency on Washington, as Ryan Katz has done nothing but improve week to week, and is 2-1 in the games James either didn't finish, or didn't play in, having missed over 7 quarters due to injuries. Last week's 393 yard passing game in Tucson, where Katz completed 30 of 42 passes, to 8 different receivers, which was supplemented by a rushing touchdown, and three scrambles for first downs, earned Katz Pac-10 Offensive Player of the Week honors.

Jacquizz Rodgers ran on a similar Washington defense for 159 yards in last year's 48-21 win for the Beavers, and has produced over 300 yards of total offense against the Huskies in his career. Also, its worth noting that ‘Quizz declared Oregon St.'s rushing game to be "terrible", and that he "needs to do better". And remembering what happened to Louisville the last time he was determined to improve.

(Even at his current "terrible" pace, ‘Quizz is on pace for a 1250 yards, 18 touchdowns season, not even counting receiving receiving yards.) 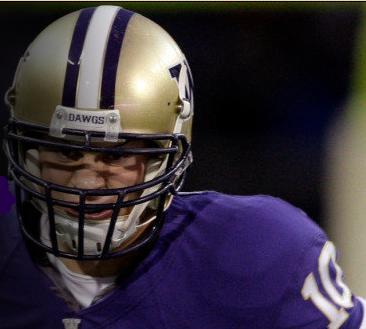 Washington isn't without offensive weapons of their own either, starting with QB Jake Locker (r.), and continuing with RB Chris Polk, who is just 15 behind ‘Quizz in rushing yards. And even if WR Devin Aguilar doesn't play, or is ineffective, due to his hip injury, Jordan Polk has filled in quite adequately, and Jermaine Kearse is capable of turning in conference offensive player of the week performances.

However, Locker is still struggling with a deep leg bruise, and a chest cold that playing all last Saturday in the cold rain didn't help. Struggling enough that backup QB Keith Price has taken most of the snaps in practice this week. Locker's trademark strength and mobility look to be reduced this week, and the only question is by how much.

Interestingly, ESPN's Ted Miller is predicting another 33-30 game, but this time, he sees the Beavers prevailing. Seems reasonable at a minimum.

While Oregon St. is only 60th. in the nation in scoring, it has come against some of the best defenses around. And they got 31 on the Sun Devil defense that held the Huskies to 14 while playing without Vontaze Burfict.

As long as Marcus Wheaton's sore knee doesn't become an issue it isn't expected to be, the Beavers offense should still score, and score a lot.

The unit that the game likely will turn on is the Washington linebackers, who, with the exception of Louisville, are not as fast as what Katz, ‘Quizz, and Oregon St. have been dealing with all season. The Huskies have got to do better than they did against either Arizona St. (Steven Threet threw for 288 yards and 2 TDs) or USC (484 yards of total offense given up despite holding Matt Barkley under 200 yards passing) in order to keep up.

Last year, Oregon St. gave Washington their worst loss of the season, and despite some significant changes on both teams, many of the same players and factors are still there. The Beavers have won four straight in Seattle, and six in a row in the series. A big reason is they are not a good matchup for Washington, and Oregon St. coach Mike Riley takes advantage of those favorable matchup the Beavers have worked to develop. That's a lot for the Huskies to turn around. Oregon St. 34 Washington 24.