The Seattle Redhawks, once a basketball power before dropping down to Division II for many years, but now back competing for a share of the northwest basketball spotlight, haven't found a conference yet that wants them. Turned down by the WCC, the Redhawks auditioned with a 51 point beatdown of Pac-10 Oregon St. Wednesday night, in a game televised regionally by Fox Sports Northwest.

It was the worst home loss ever, not just in the 60 years of Gill Coliseum, for the Beavers, and tied for the worst Oregon St. loss of all time anywhere.

Seattle blew open what was already a double digit halftime margin with a 10-0 run that capped a 16-2 stretch in the first six minutes of the second half, on their way to a 99-48 win over OSU. And the Redhawks did it without the help of their leading scorer, NBA prospect Charles Garcia. 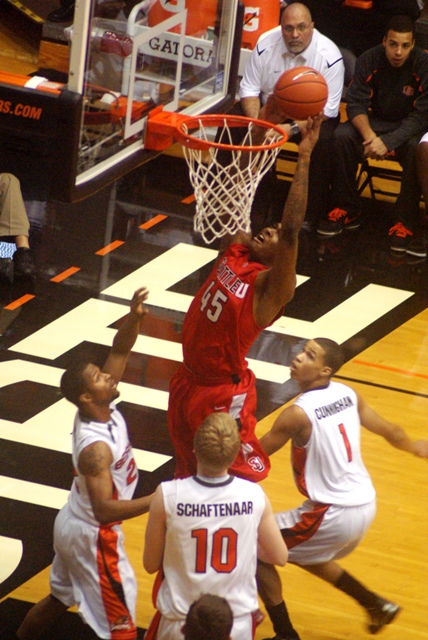 Seattle's Charles Garcia (45) only got to the rim once until the final five minutes.

Most of Garcia's 10 points came in the last five minutes of the game, after much of the crowd that came to see the touted talent had already bailed out on the blowout. However, someone forgot to tell a lot of people that the rest of the Redhawks are Division I players too.

Garcia was tagged with two personal fouls in the the first two and a half minutes, and sat down for six plus minutes. He returned at the eleven minute mark, but after getting to the rim only once, was whistled again with 8:46 to go, and didn't return until the second half.

By that time, after the Beavers had taken a 21-18 lead, the Redhawks had pulled away from the Beavers for a 41-27 point lead. Oregon St. had hit two of their four three pointers for the game for their last lead, but Seattle answered with a 23-6 run to the break.

Garcia got his fourth foul at the 17:22 mark, but Seattle didn't miss a beat. Both the second and fourth foul could charitably be described as laughable, but the Redhawks didn't flinch.

Many in the small Gill Coliseum crowd started for the exits midway in the second half, as the Redhawks kept the pressure on the beleagured Beavers on both ends of the court.

Seattle coach Cameron Dollar took exception to non-calls just after the clock wound below eight minutes left, with the Redhawks up 70-36. The combination of cold Beaver shooting and strong Seattle scoring pushed the margin to 78-36 in the next minute and a half, forcing Oregon St. coach Craig Robinson to call timeout to remind his team they had been buried 37-9 in the second half at that point, making the run since OSU had the lead 60-15.

And leaving nothing more to do than take in the Oregon St. "Black Band", the half of the band that performed tonight, so as to compare with the "Orange Band", which will be on hand Saturday afternoon at 1 PM for the Women's Civil War game against Oregon. 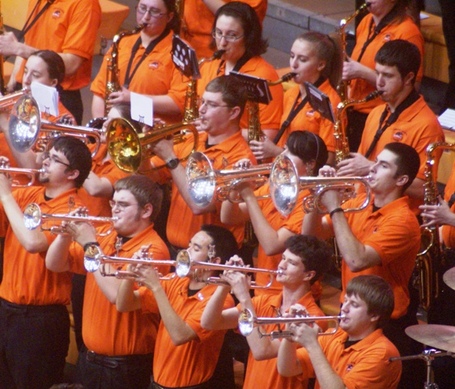 Mike Boxley drained four three pointers, and hit 70% of his shots for Seattle, to lead all scorers with 19 points. Hillsboro High alum Chris Gweth hit 80% of his shots, and finished with 18, followed by Cervante Burrell, with 17. Aaron Broussard was next on the score sheet, with 15 points.

Coach Dollar's assessment was  "We were just trying to play with great enthusiasm, share the ball and play hard. I'm proud of my guys and I look forward to the challenges that lie ahead. Definitely, this is great confidence boost for my guys." 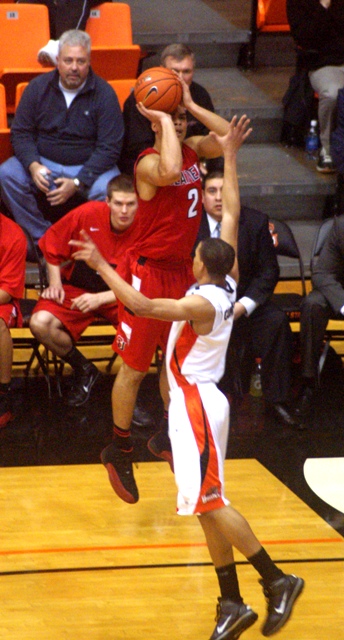 Aaron Broussard launches one of 12 three pointers the Redhawks sank to sink the Beavers.

The Redhawks shooting fell off a little down the stretch, eventually dropping to 58% from the field. But at that point, Seattle was shooting over 63% from both the line and the field. That won't necessarily set the world on fire, although it did burn the Beavers' tails, but Seattle was also over 63% from three point range. Seattle connected on 12 three pointers, and shot 74% from the line, while Oregon St. connected on under 32% of their shots, both from the field and the free throw line, and connected on only four of 22 threes, 18%.

Oregon St. had no one in double figures, as Calvin Haynes' nine points was tops for the Beavers. 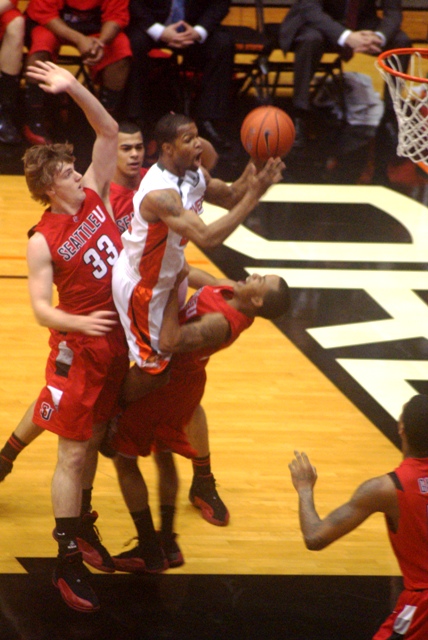 Jared Cunningham had the best night for OSU, coming off the bench for eight points, and Daniel Deane added seven points, and also led the Beavers with five rebounds. 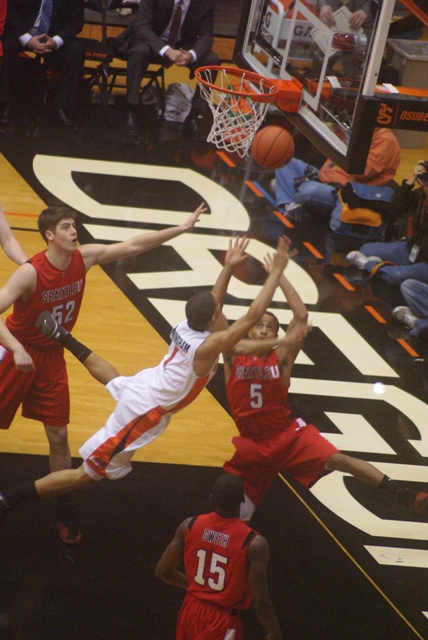 Jared Cuningham (1) gets the first two of a three point play against Seattle.

Which was another problem, as Seattle, led by Broussard with nine, out-boarded Oregon St. 47-31.

Coach Robinson's postgame observation was "Hopefully, we will not make this a habit and we will have enough time to regroup for our next game. We got out hustled, they gave much more effort and that is what happened."

Most of the night, the Beavers couldn't buy a bucket, mostly because they wouldn't take a good shot. When not firing up low percentage long range shots, OSU was trying to connect on hotly contested hard driving shots that were being met with hard contact.

Seattle isn't a huge team, and got a lot smaller without the 6'10" Garcia. The Redhawks are an athletic lot, and after the neutralizing of their leader, took on a "We'll show you!" approach, and claimed what the Seattle media is already labeling as a "Signature" win.

Why the Beavers don't have the short, pull-up jumper from 8-12 feet in anyone's arsenal to counter a slashing defense like the Redhawks' is an issue Robinson will need to address. Out-hustled on both ends of the floor, OSU had no answer when their outside shooting failed them.

The early starting time for television was a contributing factor, but the turnout was disappointing, as Gill wasn't even a third full before the early exodous began.

Seattle improved to 7-9 on the season as they headed south out of town, headed for their next stop at Sacramento St.

Oregon St., already run out into the parking lot, dropped to 6-8 (0-2 in the Pac-10), before heading south themselves, to visit the Pac-10 leading Oregon Ducks (10-4, 2-0) 7:30 Sunday night, in the 332 edition of the Civil War, and the last one ever in MacArthur Court. The historic event will be nationally televised by Fox Sports' network of regional networks, and produced by Fox Sports Northwest.