Another Pac-10 season has come and gone, and like usual-- things didn't go exactly as expected. Arizona State underachieved, as did California, and Arizona did far better than expected-- except in that 33-0 schlacking they took in the Holiday Bowl. The Trojans lost four (should have been five!! ugh!) games, which most people didn't expect. The Ducks won the conference, which was a bit of a surprise, and the Beavers had an opportunity at the Roses, again, and lost.

Building the Dam will have more on the Pac-10's 2-5 bowl record later in the week, but for now-- let's take a look at how our Pre-Season Poll held up.

Back in July, we sat down and hammered out our Building the Dam Pre-Season Poll in advance of Pac-10 Media Day. The Beavers came in relatively high at #2 in the BtD Poll, which USC claiming the top spot and Oregon coming in fourth. Here's a look at our poll and the final Pac-10 standings, side-by-side: 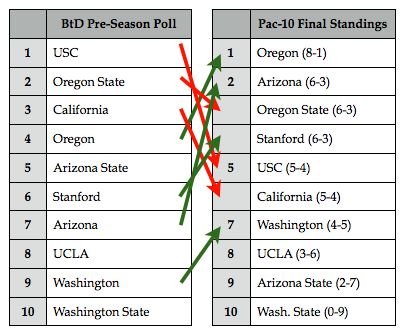 Now, it's time to cast our ballots for our final Pac-10 Poll.  The voting form can be found after the break or at this link. Beaver fan perspectives, only, please.