Bruins Claw Out Win Over Beavers

Share All sharing options for: Bruins Claw Out Win Over Beavers 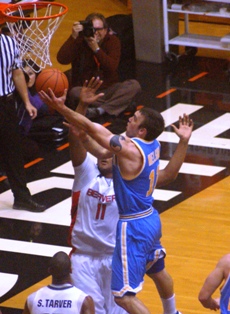 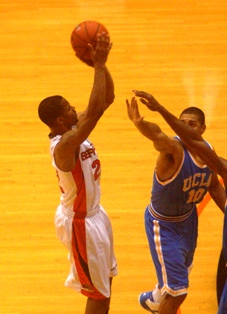 UCLA beat Oregon St. at their own game Saturday afternoon, clawing out a 62-52 win in Gill Coliseum, the sight of more than a few hard fought games the Bruins have won in the last 50 years or so.

UCLA was patient enough to match OSU as far as playing a half court offense, and a lot of zone defense, uncharacteristic in the Bruins' history, both under coach Ben Holland, and before. This year has seen an inexperienced Bruins squad struggle though, and Holland has changed up his style of play to better fit his personnel. That change bore fruit against the Beavers, who normally out-perform their opponents when the pace is one that regularly runs most of the way thru the shot clock.

Reeves Nelson had a double double to lead UCLA, connecting on seven of eight shots for 14 points, and pulling down 12 rebounds. Nikola Dragovic added 13 points, and Michael Roll was also in double digits, with 11 points. Roll also served up five assists.

Calvin Haynes was again the Beavers' leading scorer, but instead of the 25 point nights of late, was only able to come up with 16 points. Roeland Schaftenaar was the only other Beaver in double digits, with 11 points.

The game was close most of the way, with UCLA not pulling away until the last quarter of the game. 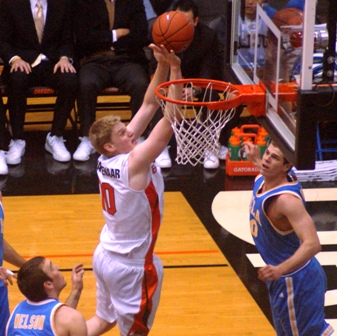 Oregon St. took three different three point leads in the first half, but UCLA managed a 6-0 run in the last four minutes before the break to take a 24-18 halftime lead. It was another scoring drought, with only two free throws in around six minutes just after the mid-way point of the second half that doomed the Beavers.

Down only one point at the 12:13 point after a Lathan Wallace three pointer pulled the Beavers within 34-33, the Bruins answered with a 16-4 run over the next five minutes, capped by a dunk by Roll.

The Beavers slowed the Bruins, and climbed back within ten points, but an over-extended defense resulted in back to back dunks by Lee and Reeves. Jerime Anderson's free throw put UCLA up 55-40, and produced the Bruins largest lead of 15 points, with 1:38 left, prompting some of the season's largest crowd of 8,067 to start for the exits.

Oregon St. battled back though, first on free throws by the freshmen Jared Cunningham and Angus Brandt, and then a nine point run by Haynes. Two three pointers, and then three free throws when Dragovic dumped Haynes on his next long range shot had the Beavers within two possessions, down 58-52 with 32 seconds left. It was as close as the Beavers would get though.

The Beaver defense played well until they had to over-extend late, allowing only a couple of dunks when Bruins got lost behind them. Dragovic appeared under the basket midway in the first half, and Tyler Honeycutt collected a lob from Roll midway in the second half.

"We just need to talk a little more on the defensive end," Cunningham said. "They got behind us on a couple of them, and it led to them getting easy layups through the back door."

"They scouted us well, and they (eventually) attacked some of the weaknesses," Seth Tarver commented afterwards. "And they just hustled. There was a streak where we had some errors, and they capitalized on our errors. After that, we were solid, but during that one streak they opened up the game and we weren't able to come back in."

Free throws and three point shooting were the cause of the Beavers' demise. Oregon St. didn't make a free throw until Joe Burton sank a pair with 7:08 left in the game. And the Beavers were only five of 23 from behind the three point line. Three of those were by Haynes, but he was only 25% from the field for the night, missing nine of 12 three pointers he lofted, and hitting only five of 20 overall.

"You cannot have any lapses in conferences games because people take advantage of it," Oregon St. coach Craig Robinson observed. "You cannot be 0-4 from the free throw line in the first half. We try to emphasize to the guys how every single thing is important for us."

The combination of another exciting Thursday night win over USC, and a lot of lobbying for Beaver Nation get more involved resulted in the best turn out of the year, and a great atmosphere early on. The patient pace that both teams were prepared to play worked against Oregon St. though, as UCLA was able to take the crowd out of the game without taking control of the game. 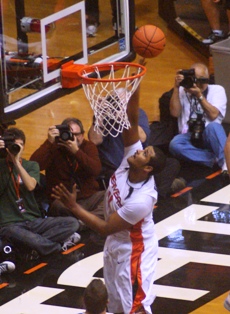 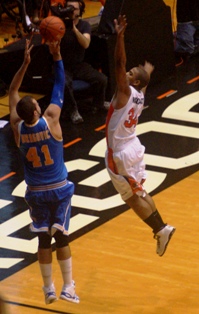 Joe Burton (l.) had his best outing in a while, with six points and six rebounds, and also a pair of assists, including a nice pass in the lane to Schaftenaar. 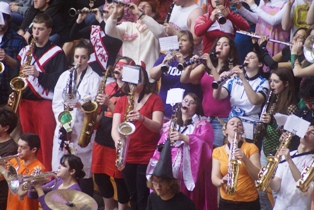 Hoping for a repeat of the successful homecoming effort on Halloween against UCLA, the Oregon State Band came dressed up as a variety of interesting characters. 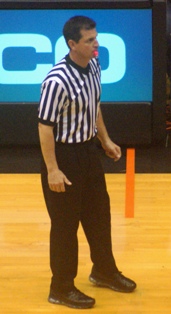 Some other characters joined in, dressed as Pac-10 officials. Rather than the usual weekly revisiting of the issue of the calls, we will just leave it at that.

The Beavers have a week off to prepare for the second edition of the Civil War this season next Saturday at 3 PM, in Gill Coliseum. That game, as was today's, will be telecast by Fox Sports Northwest. 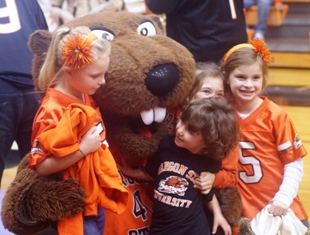 Still a great day to be, or hug, a Beaver!