Huskies Hammer Out 69-64 Win Over Beaves

Share All sharing options for: Huskies Hammer Out 69-64 Win Over Beaves

The Washington Huskies womens' hoops team hammered out a 69-64 win over Oregon St. Sunday afternoon. Two days after dropping an 82-71 track meet against Oregon, Washington found the pace of the Beavers more to their liking. Oregon St., coming in off a 63-49 win Friday over Washington St., preferred more of a half court game, but that also played into the strength of the Huskies, who had a size advantage inside, and more depth there as well, than the Beavers.

Despite that, OSU still outrebounded Washington 38-28, but couldn't come up with enough scoring.

"We got more possessions then they did, we just did not execute the way we should have," Coach LaVonda Wagner said.

Talisa Rhea poured in a game high 22 points, but the Beavers only got ten from their second scoring option, freshman Haiden Palmer. 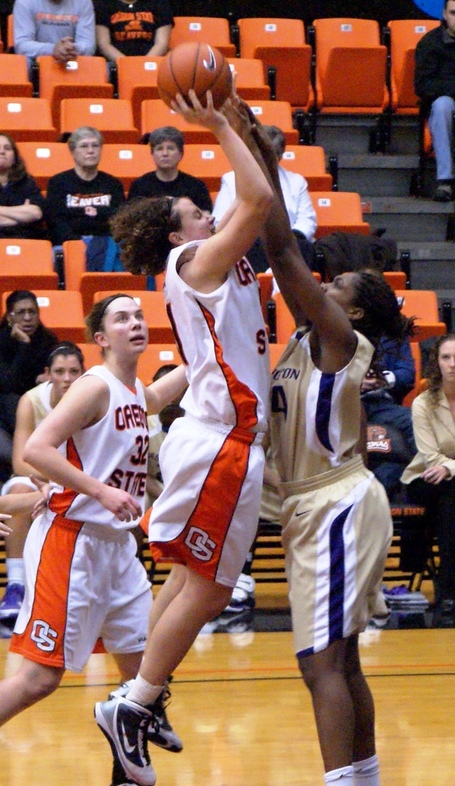 This was due in large part to the time Palmer spent on the bench in the second half due to foul trouble.

The game was close all the way, and tied 28 apiece at the half. However, at the 12:42 point, Palmer picked up her third foul, and sat down until the 9:24 mark. She would score only two more points. 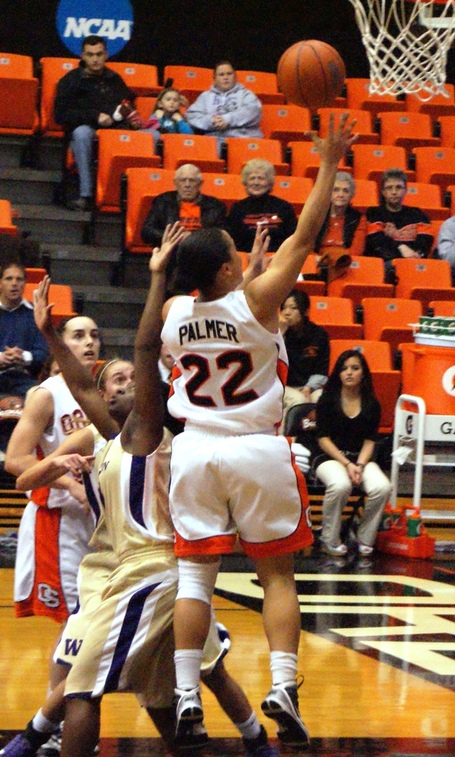 Haiden Palmer had eight of her ten ponts in the first 25 minutes against Washington.

Despite the fact that Washington led most of the way, Oregon St. seemed comfortable, and even in control of the game. But with the game tied at 47 apiece, and just after Palmer pulled down an offensive rebound, but was ruled to have lost the ball, with no foul called, at the 8:58 mark, Palmer was whistled for her fourth foul, and a technical foul was immediately called on the Oregon St. bench from 40 feet away.

Sophomore guard Kristi Kingma, who led Washington with 18 points, made both free throws, and Mollie Williams added a layin for a four, and possibly six, point swing.

Palmer didn't return until only 3:33 remained, and OSU for the first time looked uncomfortable. Without a second scoring option, Rhea was left to try to carry a Beaver rally. 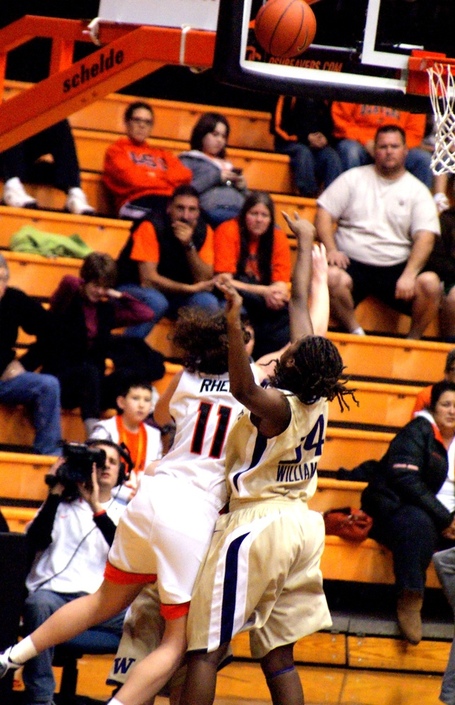 With two minutes left, and still trailing by five points, Rhea was called for an offensive foul.

Rhea made seven of seven free throws in the final 43 seconds, and 11 of 11 for the game.

With 40 seconds left, out of a timeout after two of her made free throws, with the Beavers still trailing by five points, Rhea purposely took a foul against the Huskies' Sarah Morton, but the foul was assessed to Hayden, ending her evening.

Morton and Kingma both made four free throws apiece in the final 40 seconds to foil Rhea's efforts. The Beavers employed fouls to prolong the game, and gain extra opportunities, but with a pair of ball handling guards that could shoot free throws, the strategy didn't work against the Huskies, whose backcourt duo connected on 13 of 16 from the line. 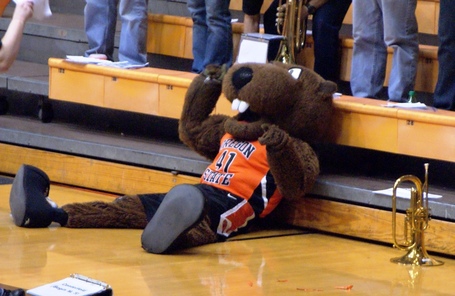 After the mens' hoops teams lost six and five point decisions, another five point loss was too much for Benny!