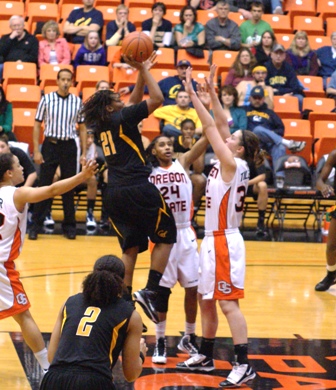 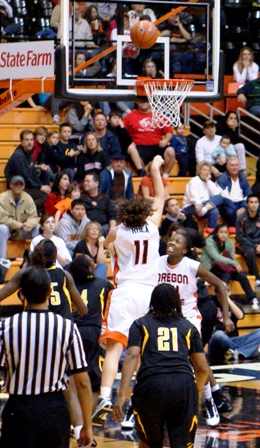 After 40 minutes, nothing was settled. After 45 minutes, still no decision. It took double overtime and a record setting night by Cal guard Alexis Gray-Lawson (l. 21) for the Golden Bears to finally pound out a 79-75 win road win over Oregon St. Saturday night.

In one of the more physical games of the season, Gray-Lawson set an all-time Cal scoring record, with 47 points, and also a free-throw shooting record, hitting 17 of 20 from the line, including six of eight in the decisive second overtime.

Oregon St. had four players in double figures, led by Talisa Rhea (r.), with 25 points. Rhea also did serious work from the line, connecting on 11 of 12, including three straight with 4 seconds left in the first overtime to pull the Beaver back into a 68-68 tie.

Both Gray-Lawson and Rhea played all 50 minutes of the slugfest.

Gray-Lawson had five of Cal's first seven points to start the game, as the Bears jumped out to a 9-1 lead 4:22 into the contest. It would be the largest margin of the night in the dogfight. Rhea scored eight straight as Oregon St. answered with a 10-0 run, taking a 11-9 lead at the 12:22 point. Neither team would open more than a five point lead again until a Gray-Lawson free throw with 23 seconds left in the second overtime pushed Cal to a 77-71 lead.

The game was tied 13 times, and the lead changed hands 16 times, and 51 fouls piled up.

"I thought we played hard tonight," Oregon State head coach LaVonda Wagner said. "Unfortunately, we let one of their best players have a career night." 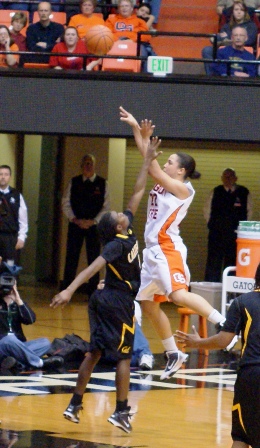 Cal took a 60-57 lead with 2:24 left in regulation on two free throws by Gennifer Brandon. Haiden Palmer (r.), who had her best game in a while, with 13 points, cut the deficit to one point with a layin with 44 seconds showing. Gray-Lawson missed for the Bears with 18 seconds left, and the Beavers had a chance to win the game when El Sara Greer went to the line with eight seconds left. But Greer got only the second shot to fall, leaving the score tied. Greer did deny Cal's last second attempt to win, blocking Natasha Vital's shot with one second left, forcing the first overtime.

Cal got all eight of their points in the first extra five minutes from Gray-Lawson, six at the line, but it was her foul on Rhea's three point attempt with four seconds left that led to the second overtime.

The Bears finally took a measure of control with 2:26 to go in the second overtime when Eliza Pierre picked off a lazy pass by Rhea in the OSU backcourt that led to Natasha Vital's layup for a 75-70 lead, and more importantly, a two possession margin that forced the Beavers to foul. And the Bears made sure the ball was in Gray-Lawson's hands when the fouls came.

"We did not capitalize on our possessions in the second overtime," Wagner felt. "This was a great experience for my team, though. I'm not happy with the result, but I am proud of the way we battled." 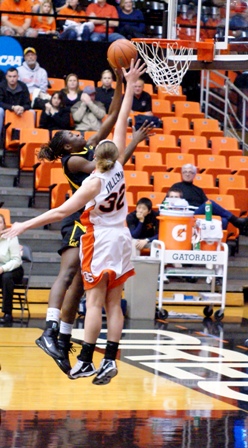 Brandon (l.) had a double-double in support of Gray-Lawson, with 11 points and 11 rebounds, good for co-game high honors on the glass with Greer, and Vital added ten points. 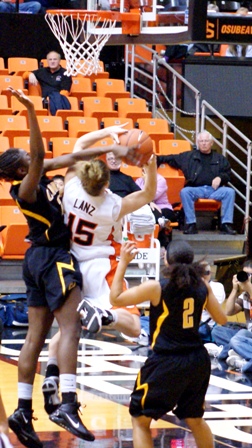 Oregon St. had four players in double figures, as Kirsten Tilleman tallied ten points, and Kate Lanz (l. 15) came off the bench for a career best 12 points, all in the first half. Which leads to one of the questionable coaching decisions of the game.

Oregon St. has struggled of late to find an additional reliable source of scoring in support of Rhea, and it looked like they had found one in Lanz when the freshman out of Central Catholic High scored eight consecutive points for the Beavers in less than two minutes, from the seven minute mark to the five minute juncture. The streak included a three pointer, and a tough jumper that dropped just as the shot clock hit zero.

But Oregon St. only went to Lanz for one shot after halftime, and she sat from the 14:11 mark until only 23 seconds remained in the second overtime period.

Cal had no hesitation to go with a hot hand though, and the result was Gray-Lawson, after a 14 point first half, went on to produce the second highest point total of the season in the NCAA.

Cal assistant coach Kevin Morrison, who also coached Gray-Lawson in AAU ball explained "I've coached Alexis since she was a sophomore in high school. I've seen this before, obviously not quite like this, but she is capable of huge performances. Her previous high was 37 against Stanford last year, and she is the kind of player who has always said ‘Give me the ball, and I'll carry the whole team if you need me to.' A lot of kids won't do that, but she is our leader."

It was only the fourth time ever a Cal player has scored 40 points in a game, and broke Jennifer Bennett's record of 45 points against Arizona on Jan. 26, 1987.

Oregon St. narrowly out rebounded Cal 41-39, but the Beavers had one more turnover than the Bears, and got to the line two fewer times, and also made two fewer free throws. It was all the difference Cal could come up with, but also all they would need.

The win lifted Cal's season record to 10-8, moved the Bears to 4-3 in Pac-10 play, good for fourth place. The Beavers suffered their sixth straight loss, and fell to 9-8 overall, and 1-6, and ninth place, in the conference.

Cal returns home for a pair of games against the Arizona schools next weekend. Oregon St. travels to Los Angeles, to face USC Thursday night at 7 PM, and UCLA Saturday afternoon at 2 PM.