A 15-4 run that led to a 21-10 OSU advantage down the stretch wasn't quite enough, as the California Golden Bears used a hot start to the second half to open a 15 point lead in a game tied at the half, and then hold on to defeat the Oregon St. Beavers 61-57 in the lunchbreak game on CBS.

But Cal got 14 points from both Theo Robertson and Jerome Randle, and another 12 from Jamal Boykin. Randle, an above 90% free thrower, and Robertson, a 78% shooter at the line, both hit a pair of free throws in the final minute for the margin of victory.

Patrick Christopher had a pair of baskets in the Bear's fast start to the second half, when the Beavers seemed confused about their assignments, and uncertain about what the suddely more active Bears were doing. It was a fatal problem as far as the outcome was concerned.

Like most people, thanks to the Pac-10's poor television packages, I didn't see Thursday's game, live or a replay, but the supposed lack of effort that was reported to be the story of the game at Stanford wasn't repeated in Berkley. Even when the Beavers struggled, it wasn't an effort issue.

But that stretch, when Cal outscored OSU 13-4 over a nearly five minute stretch, illustrates the problem Oregon St. still struggles to address, which is to play with a sense of a plan for each play of the game. Oregon St. Coach Craig Robinson acknowledges the issue, saying "It's something I have to examine, how to prepare the guys to play the way we did early and late in the game all the time." 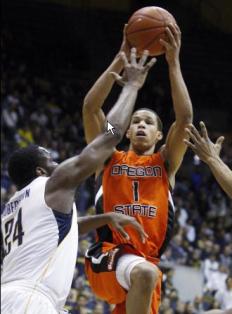 Some of that results from going against supposedly better athletes, but remains the hurdle to be overcome.The good news for Beaver Believers is it appears Cunningham (r., shown scoring over Robertson in Ben Margot's AP photo) is well on his way to evening up the talent gap. Cunningham had the lone good night off the bench for OSU Thursday, and as a result, was one of two new starters today. Cunningham and Kevin McShane replaced Josh Tarver and Daniel Deane in the introductions, and Cunningham played 30 minutes.

And in addition to his career best (so far) in scoring, Cunningham controlled Randle rather well for much of the game defensively. "That's something he can be proud of," Robinson noted.

Cal improved to 12-6, and 4-2 in the Pac-10 with the win, but if Oregon St. fans are frustrated with the Beavers' inconsistent play, the Golden Bear Faithful have to be nervous, even with the weekend's sweep. At times, Cal does show the flashes that motivates talk of an at-large NCAA berth out of the dog eat dog Pac-10 race should they not prevail in the conference tournament, and makes them a popular pick the last couple of years to finish at or near the top of the standings.

But today's narrow escape, in a game they were fortunate to not be trailing in at halftime, is evidence that the Bears aren't capable of the consistency that will make their followers rest easy. Had OSU not been a woeful 2 of 11 from three point range, Cal's 4 of 18 from outside the arc probably would have cost them this game.

The Beavers' quality effort with a larger audience watching was also timely, from Oregon St.'s standpoint. At least the two head-scratcher games of late, against Seattle and Stanford happened when not many were looking.

Oregon St.'s third straight loss dropped the Beavers to 8-11, and 2-5 in the Pac-10, last place in the standings, pending Oregon's outcome this evening against Stanford. The good news is the Beavers are headed home for the next three games, all on Fox Sports Northwest, starting with a visit from USCThursday night at 5:30 PM.

They gave themselves a chance to win this thing. The funny thing is that we we have to figure out what we're doing as coaches and staff members to get them to play like this all the time. Now, I know that it's easier to get up for a big game or a team that's closer to first place than not, but this league is wide open for people to take their shot. I have to examine what I'm doing at practice to get these guys ready for an effort like this all the time. Having said that, the biggest difference in last season is that the second day, we wouldn't be able to put together an effort like this. We've got a little bit more of a bench and more depth. It was nice to see that we could come back after a flat Thursday and play really well early on Saturday.

We felt that if we kept them on their heels, we could keep the pressure on them. We had a little bit of a lull right after halftime and they came out and banged a bunch of shots. That was the difference in the game, because if we had not have had that little respite there, I think we would have been ahead. AS you can see, things get tougher when the game is on the line. You want to keep the game close enough at the end so all those shots aren't easy for them to take and make.

On the pressure getting to Cal...

That's the Oregon State that we want to see all the time. That's how we were playing at the end of the year last year, and it's nice to see it back but it has to be on a consistent basis, and that's what we have to examine as a staff.

On the lineup changes, and the insertion of Jared Cunningham into the starting lineup...

I think he should be proud of this game. I tried to use a little reverse psychology when I said that there's no way a freshman can play that good when he comes back home, and it worked. He proved me wrong. I think we've found ourselves a player there. We've been trying to nutture him along so that when he was ready to have a breakout game like this it would be something important and something that's needed. I'm happy for him, I know his teammates are happy for him, and it just gives us something else to add to our toolkit.

He performed like a basketball player performs. Everything he got was because of his knowledge for the game, and his feel for the game. A lot of them were comebacks where he had to see what was going on with the defense and make a decision, and he did that well. He got fouled in situations where he was going to the basket, so he got to shoot his foul shots. He was 8-for-11, so that's pretty good. It's nice to see him rewarded for all the hard work he's doing. He did a good job on D too, he had to guard Randle out here on the top, and he was in the back of the 1-3-1 causing problems. He imposed his well, and we're really excited about having him around for the next few years. He's got a lot of things to learn, but the good thing is that he's a willing student and an aggressive player, and that's what we need out there.

I know Jermoe from Chicago and think he's a terrific player, I think he has a shot at the next level. When a kid is that good, you have to focus on him and thats what we did. We know that he's the straw that stirs that drink, to use a often-used metaphor. He makes them go, and if his energy level is high and his confidence is high, and he's banging threes, everybody starts banging them. As you saw, when we gave him a little bit of a problem, the other guys were going to have to step up, and they had guys who stepped up. I thought that all six of Jamal Boykin's shots were important. It was nice to turn him over a bit, but unless you win the game, mission not accomplished.

I was so mad at Calvin during the entire game because of his defense. He thrives when I get mad at him, because he wants to be good, and he's such a good kid, and he wants my approval, and I have to use it against him in order to get him going. He wasn't going early on, and as soon as he realized that he had to be guarding his man or I'd take him out, he started playing. Then he had a Calvin Haynes-type game. It's tough to discipline all the time-- he's had a rough year, it's hard to continue to be on him all the time, but if that's what he needs, that's what I'll do.

On getting the loose balls, rebounds...

If you look at the stat sheet, it looks like we had a chance to win the game, which we did. The only real offense they got against use were fast break points, and those came from ill-advised shots on our part. That gives us a lot of stuff to work with, but it leaves you empty because a few more things could have won the games. I was pleased with the turnovers, and not as many charges-- which means we're running our offense and cutting hard, and doing what we're supposed to do.