Stanford Too Strong Down The Stretch

Share All sharing options for: Stanford Too Strong Down The Stretch 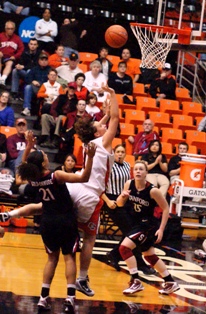 Oregon St. rallied from a fast start by second ranked Stanford to make it a game most of the way, but the Cardinal eventually overpowered the Beavers for a 63-47 win. It was the 20th. straight win for Stanford over OSU, and 31st. in the last 32 meetings.

Talisa Rhea had a game high 26 points, and Kirsten Tilleman and Anita Burdick had strong defensive efforts, holding Stanford's Nnemkadi Ogwumike, the Pac-10's scoring and rebounding leader, and 6'4" Jayne Appel well under their scoring averages, and below their normal numbers in rebounding as well.

Oregon St. did a good job all game long of isolating Ogwumike, who finished with 12 points and nine rebounds, from the ball on both ends of the court.

But the Beavers had no answer for Kayla Pedersen. The 6'4" junior poured in 23 points for the Cardinal. And while the quicker Beavers got Appel in foul trouble in both halves, freshman Joslyn Tinkle, the look-alike heir apparent to Appel came off the bench for nine points and six rebounds.

"Pedersen had a really good night," Oregon St. coach Lavonda Wagner noted. "Her size on the perimeter gave us a lot of trouble."

Stanford stormed out to a 12-2 lead right off the bat, due to six Oregon St. turnovers in five minutes, and it looked like the Cardinal were headed for a blowout. But the Beavers answered with a 12-1 run of their own, and the battle was on. In the process, Rhea scored five straight points, and with a basket, shown above, plus a free throw at the 14:23 point passed the 1,000 career point mark. Rhea is the 26th. player in Oregon St. women's hoops history to reach the four-digit scoring level.

Once Oregon St. caught Stanford, neither team took more than a two point lead for the rest of the half. After Haiden Palmer had put the Beavers ahead with 26 ticks left, Pedersen gave Stanford a 29-27 lead at halftime with a layin plus a foul shot with 2 seconds left.

Stanford slowly crawled away from Oregon St. in the early stages of the second half, eventually expanding the lead to eight points, up 42-34, when Tinkle tinkled in two free throws just more than seven minutes into the half.

Rhea pulled OSU right back into the game with back to back three pointers, but Pedersen then proceeded to turn the game. Pedersen's basket at the 9:41 opened the lead to 44-39, the last field goal the Cardinal would make for over five minutes.

Early foul trouble benefited Stanford more than Oregon St., as the Cardinal scored their next ten points on free throws, the first four by Pedersen. Stanford made all 14 of their second half free-throws, and would go on to make 17 of 19 for the game. In contrast, Oregon St. was only 6 of 13.

"I thought we played very well tonight," Wagner said, "But obviously, in the second half, we put them on the free throw line 14 times, and they scored all 14 of those. There were five possessions in a row where they went to the free throw line, and that's 10 points. We have got to understand, and be able to adjust to the way the game is going."

And when Pedersen broke the run of free throws by burying a three pointer from the hash mark on the left side with 4:31 left for a 14 point, 59-45 lead, it essentially put the game away for Coach Tara VanDeveer's 773rd. career win. 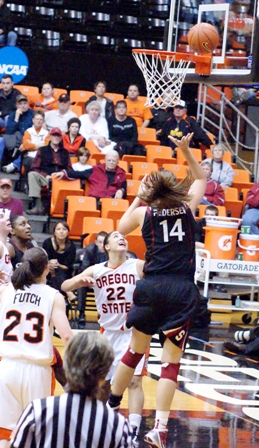 Kayla Pedersen (14) scores two of her 23 points for Stanford. 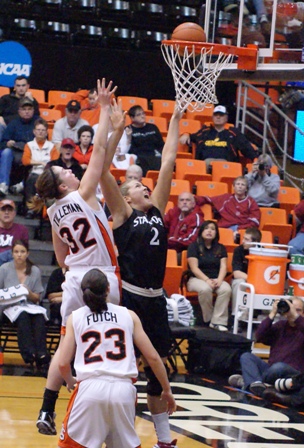 Oregon St. hustled to 16 offensive rebounds, and trailed the taller Stanford only 33-30 overall. But too little scoring support for Rhea was again the Beavers' downfall. Burdick was next on the OSU ledger, but with only eight points. Haiden Palmer had only five points before fouling out.

It was partially a product of Wagner's game plan to be patient with Oregon St.'s possessions, but the Beavers also continue to struggle with the absence of last year's point guard, the graduated Mercedes Fox-Griffin. Tilleman consistently beat Stanford's various big post players to the block, but both Julie Futch and Brittany Kennedy hesitate to make the entry pass as Tilleman is still making her break, and that allowed the Cardinal defense to catch up. As a result, Tilleman got up only three shots.

Stanford improved to 16-1, and continue to lead the Pac-10 with a 6-0 mark, as they head to Eugene Saturday to take on Oregon. Oregon St., having lost their fifth straight game, fell to 9-7 for the season, and 1-5 in conference. The Beavers host the California Golden Bears (9-8, 3-3), 72-62 winners over the Ducks tonight, Saturday night a 7 PM, on "Fill Gill" night, when general admission will be just $1.