Beavers To Take On Big Red

Share All sharing options for: Beavers To Take On Big Red

Oregon St. fans have seen some of the most dominant programs in history roll into Corvallis, and once in a while, get tripped up. That comes with the territory when you play football in the same conference as USC, and annually faced the UCLA Bruins of the John Wooden era and shortly thereafter. 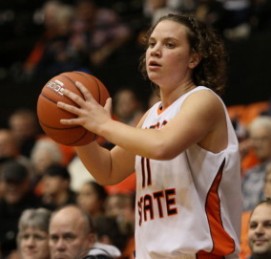 Thursday night is the next opportunity for an upset, when the Stanford Cardinal rolls into Gill Coliseum, for a 7 PM tipoff against coach LaVonda Wagner's womens' hoops squad, in the 50th. meeting between the schools.

The Beavers (9-6, 1-4), led by Talisa Rhea (l.), freshman Haiden Palmer, and Kirsten Tillerman, who combine on average for 38 points and 15 rebounds per game, take on the second ranked Cardinal, who have a pretty good big three themselves. 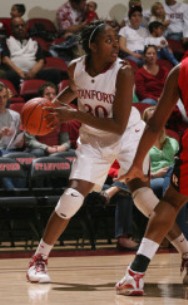 Kayla Pedersen adds over 17 points per game, and Jayne Appel another 12.8 points and over nine rebounds.

Players like that have Stanford (15-1, 5-0) alone in first place in the conference, the position the Cardinal is most acquainted with.

Hall of fame coach Tara VanDeveer, in her 24th. year on the farm, has led Stanford to 17 conference titles, 21 straight trips to the NCAA tournament, seven Final Four appearances, including the last two seasons, and two National Championships. VanDerveer has a record of 620-143 at Stanford, and has 772 coaching wins, not counting her stints in the Olympics, including leading the USA to the 1996 Olympic Gold Medal in Atlanta. 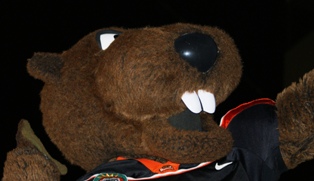