Coach Lavonda Wagners' Oregon St. women's hoops squad used a defensive performance that set a school record to open PAC-10 play New Year's night with a 63-49 win over Washington St. It was a school record fourth consecutive game where the Beavers held their opponent under 50 points.

Talisa Rhea conected on three three-pointers, and scored 12 of her co-game high 19 points in the second half as the Beavers pulled away, after trailing 29-27 at halftime. 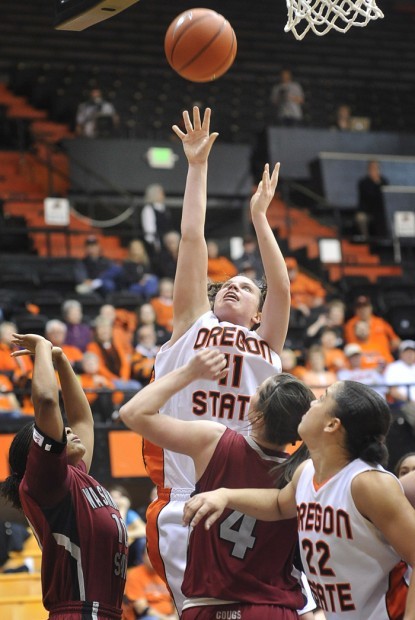 Freshaman Haiden Palmer also had 19 points, a season high for her, to share leading scorer honors.

The Cougars' KiKik Moore led WSU, also with 19 points. The Cougars dropped to 5-7 for the season.

Palmer was one rebound shy of a double double, and of El Sara Greer, who led all rebounders with 10 boards for the Beavers.

In addition to taking an early share of the Pac-10 conference race lead, the Beavers improved to 9-2 for the year heading into Sunday's 4 PM contest with the Washington. The Huskies come into Gill Colisemu with a 5-6 record, after cuting a 17 point deficit at Oregon down to one point in the second half. But Washington couldn't get over the hump, finally falling 82-71 to the Ducks in their Pac-10 opener.