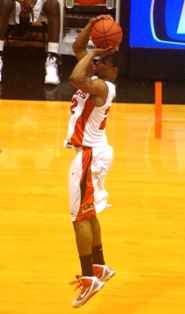 Arizona St. got out of Corvallis with a 66-57 win Saturday afternoon over Oregon St. The win, coupled with the Sun Devils' victory Thursday in Eugene over the Oregon Ducks, completed a sweep of the Willamette Valley that leaves ASU alone in first place in the Pac-10, with a 4-2 record.

"What a hard fought game," Arizona St. coach Herb Sendek said. "Guys were getting after it on both sides. Guys just battled, there was nothing artistic about it. Oregon State battled, too."

The Sun Devils held a one point, 30-29 lead at the half, after a close battle that saw four ties and four lead changes, and a scoring drought that saw no points scored for nearly two and a half minutes.

The game got away from the Beavers early in the second half, when the Sun Devils answered Seth Tarver's initial basket with a 9-0 run that started what was eventually a 22-9 ASU run to the games' biggest margin of 14 points with just under 12 minutes left.

Ty Abbott accounted for 13 of 15 points for ASU in the heart of the run, including four three pointers, three of them in a row. Abbott went on to lead all shooters, with five three pointers, and was the game's high scorer, with 21 points, 18 in the second half. 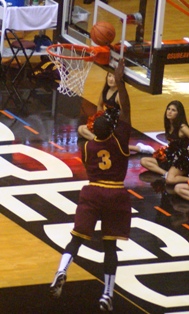 OSU rallied behind back to back three pointers by Calvin Haynes, who led the Beavers with four threes, and 17 points, and a conventional two plus one three point play by Jared Cunningham.

The Beavers never got closer than four points with their comeback though, on S. Tarver's dunk with 2:41 left.

Rihards Kuksiks sank ASU's eighth three of the game, and had three of the five free throws that the Sun Devils made to close out the win. 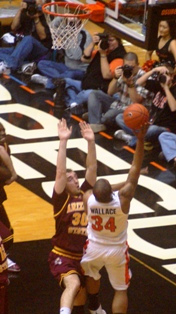 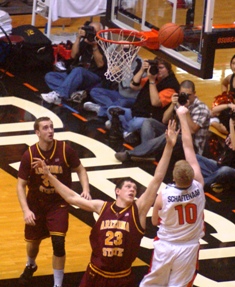 Kuksiks was the only other Sun Devil in double digits, with 15 points.

The Beavers shot 57 % from three point land, as both Hayes and Lathan Wallace, the hero of Thursday's win, hit four of the long range shots. OSU also held the Sun Devils below their season averages shooting, both from behind the three point arc, and from the field overall.

Sendek noted "Oregon State has an excellent defense, and it's hard to prepare for. You aren't going to teach your guys that defense between Thursday and Saturday." 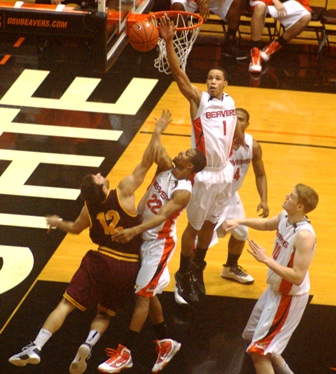 The Oregon St. defense held Arizona St. below several of their offensive averages.

But Wallace especially got the ball not as he arrived at a spot, but a couple of seconds later, leading to another pass instead of an open look. And when ASU needed points the most, they not only got up three pointers, they were often uncontested.

And loose balls too often wound up in the Sun Devils' hands. Robinson said "I didn't think we were diving enough." When you play a team that's this experienced and this good, you have to come up with the loose balls, or at least some of them. And when you get a great three point shooting team like this to miss those shots you have to come up with the rebounds. I thought we did a pretty good job against their match-up, but you just have to convert some of those shots that we had the opportunity to make."

In the first half, Arizona St. was especially cold from outside, making only three of 13 attempts, but the Beavers couldn't shake them, due to too many open inside shots. The Sun Devils capitalized on over-pressure from the Oregon St. 1-3-1 defense, which allowed the ball to get deep, and inside, repeatedly. Being an "inside-out" defense, one of the greatest vulnerabilities comes when the wings overplay, and get not only out of position, but out of position to the outside.

Come the second half, Oregon St. simply suffered several breakdowns that allowed uncontested weak side shots. Some were as a result of double team pressure, but some were simply mistakes on assignments.

Coach Craig Robinson acknowledged the problem, but wasn't sure of the root cause, saying "We'll have to look at the tape to determine exactly why it happened, but we certainly had some breakdowns."

Calvin Haynes added "We need to focus on missed assignments, and locating the shooter, the ones that make shots."

The Beavers' inability to pull away in the first half made them vulnerable not only to the Sun Devils' second half run, but also several calls that film review proved to be more of what Robinson refers to as "clinical evidence" of mistakes that cost points, possessions, and fouls. And in a close contest, ultimately any chance to win.

The largest crowd of the year, 7,432, filed into Gill despite the availability of the game on Fox Sports Northwest, but the energy level never approached Thursday night's. Much of Beaver nation sat back like they were in a theater during the critical middle stages of the game. The darkness caused by all the lights that are out (and have been for several years) in the old building does create the movie theater atmosphere instead of one of energy, but for a team that Robinson has repeatedly pointed out needs the crowd's help, waiting until the late game rally to get involved, if they do at all, isn't going to put the Beavers over the top against the better teams.

Whether anything will ever be done about the state of officiating in the Pac-10 remains to be seen, but the fact that sanctions have not been coming down after complaints that tape proves to be justified would seem to confirm the problem.

Arizona St., to their credit, "read" the situation well, and played accordingly. It is one of the things that Oregon St. still needs to get a handle on.

Finish games night in and night out still is too.

After an excellent rally Thursday was rewarded with a win, it was especially surprising to see the white flag waved with a minute left. Earlier in the day, West Virginia, trailing Syracuse by a similar, and seemingly insurmountable lead, nevertheless battled to the end, and got back into the game. Oregon St. let too much time run off before taking fouls, or getting off shots, and also left time outs on the board. When losing, there really is no justification for leaving multiple time outs on the books.

The outcome and how it came about not only deflated the crowd, it underscored the difference between where hoops in the northwest is at, contrasted with the conferences like the SEC and ACC. Not that the Corvallis Fire Dept. needs to have mattress fires in the Memorial Union Commons to respond to, but nothing about Saturday's reaction suggests the outcome won't occur again.

Oregon St. fell to 8-9 for the season, and 2-3 in the Pac-10, in a four way tie for the cellar. The Beavers must ready for a trip this coming week to the Bay area, for tilts 7 PM Thursday night at Stanford, and Saturday morning at 11 AM in Berkley, against California, in a game to be nationally televised by CBS.

A sweep of the Bay area schools was the turning point in last season, and with Stanford also struggling along at 8-0, and after Cal was dominated by Washington today, losing by 15, after trailing by over 20 for much of the game, the table is certainly set.

"I told the guys that we have a lot of basketball left, and we're playing a really good team, another team that's going to be fighting for the championship," Robinson said afterwards. "It would also be a little irresponsible to compare this coming weekend to last year. There's a different air going to places when you feel like you're expected to win this year. We won't be able to sneak up on people, they're giving us their best games, so this experience is going to be completely different and we're just going to handle it one day at a time."

Can the Beavers bounce back again, and capitalize on the opportunity again?