With the game on the line, Arizona lost track of Lathan Wallace. But Calvin Haynes didn't. When the Beavers' point guard spied Wallace spotted up on the left baseline with no one near, Haynes pushed a pass to the gunslinger out of Portland's Jefferson High, and Wallace, who had already hit three three pointers, lofted the shot that looked good as soon as it left his wrist with 1.1 seconds left. And when it dropped thru the net with .9 showing, Oregon St. had completed a 21-7 rally that produced the 67-64 win.

It might be that the Wildcats discounted OSU's outside shooting, which only elevated to 35% for the game with the game winner. Or perhaps with the Beavers only needing two points, they believed the play would go inside to the game's high scorer Roeland Schhaftenaar, who had taken over the game midway in the second half. It could even be chalked up to the lack of familiarity by first year Arizona coach Sean Miller who might not be acquainted with Wallace and his heritage from one of the storied programs in the state.

"We thought if we could just start making some of those shots, we would be all right," Oregon St. Coach Craig Robinson said afterwards. 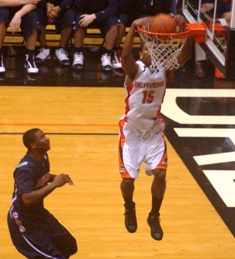 It's also doubtless anyone from Arizona that was there tonight at Gill will forget the lethal nature of leaving Lathan alone now though. None of the images in the minds of the Arizona radio audience, larger by far than usual due to this being the first Wildcat game in over 12 years that hasn't been televised, will be more vivid than the reality of over 6,000 Beaver Believers erupting as the shot dropped thru though.

"That's called desperation," Robinson commented. "In the last four minutes or so, there isn't a whole lot of coaching going on. It's just the guys making plays. Roe was desperate to stop them from

scoring, so he blocked two shots. And for Lathan to make that shot, that was a BIG shot!"

Still running on the energy of Sunday night's Civil War win, Oregon St. got off to a fast start, sparked by a pair of Seth Tarver dunks. 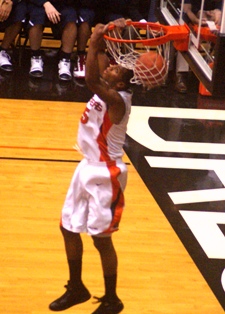 But it was because of their passing that the Beavers built a 13 point first half lead. Tarver was red hot, and every shot he put up from the field or the free throw line in the first half either went in, or resulted in a foul on Arizona.

But it was because of their passing that the Beavers built a 13 point first half lead. Jared Cunningham, who had the best game of the OSU bench crew, and both Seth and Josh Tarver had pretty assists in traffic.

However, the Wildcats, initially unable to solve the OSU 1-3-1 defense, and cold from the outside would warm up, and also shut down the lanes in the lane the Beavers had been cutting thru. With Derrick Williams matching S. Tarver's ten first half points, Arizona climbed back within 30-27 with just over three minutes left before halftime, and went to the break down just four points, 33-29.

Early in the second half, it was Arizona that owned the paint. Thunderous dunks by Williams and Kyryl Natyazhko highlighted what would become a 24 point turnaround, as the Wildcats clawed their way to their largest lead, 57-46 with nine minutes left.

Whenever Daniel Deane or Schhaftenaar sat down, Oregon St. was unable to control one side of the lane or the other, as neither Omari Johnson, Kevin McShane, or Joe Burton could keep Arizona off Oregon St.'s flank.

Schhaftenaar had seen enough by that point, and took control. Schhaftenaar scoried 10 of 13 OSU points during the rally, including the layin that tied the game at 64 all with just over two minutes left. 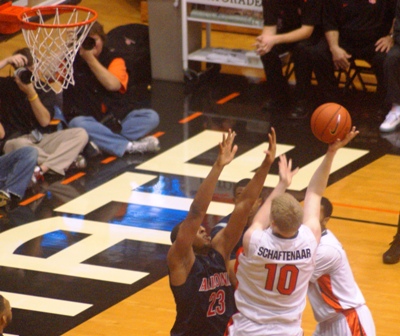 OSU's Roeland Schaftenaar (10) goes up for two of his game-high 22 points.

But his impact defensively was most daunting for Arizona. In the last minute, stopping a three on one break, and then after the Wildcats got the rebound, swatting away another shot without picking up a foul, energized the crowd of over 6,700. Then, with 14 seconds left, another blocked shot set up the final possession, and Wallace's winning shot. 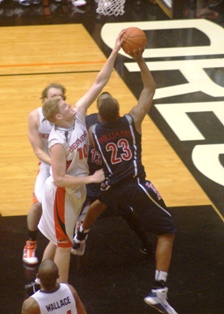 Arizona's Derrick Williams (23) led the Wildcats with 20 points, but OSU's Roeland Schaftenaar (10) blocked this shot that would have given the Wildcats the lead in the last minute of the game.

"The crowd was really into it. We need that," Robinson explained. "When these guys make a play, and they hear our crowd cheering, they think ‘We really can play.'"

Schhaftenaar finished with a game high 22 points, while both Wallace and S. Tarver were also in double digits, both with 14 points.

"This is the Roeland that we expected 15 games ago," Robinson said. "I couldn't be happier for that kid. Roeland is a hard guy to be hard on, because he does everything right, he come in and works, he's one of the nicest guys on the team, one of our brightest kids, one of the best students. And for him to be struggling like he did was tough for him, and I'm really happy he had the game he had today."

Williams wound up leading the Wildcats with 20 points, and Nic Wise added 16, including three of Arizona's six three pointers. Kyle Fogg also added 10 points, but Wise and Fogg both missed three pointers down the stretch.

Increased defensive pressure by Oregon St., especially late in the game, dropped Arizona's shooting percentage from the field, and on three pointers, down from 50% into the mid-thirties in the second half. The Beavers held the Wildcats scoreless for the final four minutes of the game.

The two troubling stats for Oregon St. was being out-rebounded 37-30, and seeing their free throw shooting desert them in the second half. After making nine of eleven from the line in the first half, only five of thirteen fell after the break.