Kiffin Comes Back to USC

Share All sharing options for: Kiffin Comes Back to USC 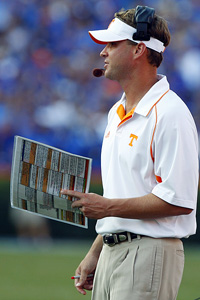 Former USC assistant Lane Kiffin, shown at left in Kim Klement's US Presswire photo from a game this past season, created quite a stir when he announced tonight (Tuesday, 1/12) that he is leaving Tennessee after one season, to take the top job with the Trojans that Pete Carroll, whom Kiffin coached under, vacated to take over the Seattle Seahawks.

After making a brief statement on campus before proceeding to clean out his office, Kiffin found the parking lot blockaded, as Volunteer boosters and students responded with a minor riot. Roving groups on campus set a fire in the quad, and were in search of Kiffin to vent their frustrations. In another difference between the Pac-10 and the SEC, Kiffin inadvertently discovered that coaching changes in the SEC usually involve, tears, or yelling and something being set on fire.

Further stirring the pot, Kiffin invited Norm Chow, most recently offensive coordinator for UCLA and Rick Neuheisel, to move back across town to take the same job again at USC. Chow was Carroll's coordinator when the Trojans won consecutive national titles in 2003 and 2004. Chow's agent announced Thursday (1/13) that he was planning to stay with the Bruins. Kiffin had indicated he anticipated calling the plays, not whomever becomes the offensive coordinator.

Kiffin, coming off a 7-6 season at Tennessee, after a 5-15 stint with the Oakland Raiders, was on the USC staff at the same time as Chow, and appears to have mended a rift that developed between the two, and led to both eventually seeking other options. Only to reunite again, back at the Coliseum.

The quick move by USC Athletic Director Mike Garrett fills the Trojans' openings during the no-contact week in recruiting, and should avert the loss of verbal commits. It may even result in some of the former Tennessee staff's top verbals reconsidering, as some will be invited along to Heritage Hall.

Earlier in the day, Boise St.'s Chris Peterson had reached the top of USC's list, after Oregon St.'s Mike Riley elected to accept a contract extension, as did Jacksonville's Jack Del Rio, and the Tennessee Titans' Jeff Fisher, like Del Rio a USC alum, took himself off the list. Peterson has just recently signed a five year extension with the Broncos, and it appears he was happy to still be on the sidelines of the blue turf when Oregon St. visits next September.