Share All sharing options for: OSU Wins the Roses

For Beaver fans, and Duck and Pac-10 fans for that matter, the only problem is it is the wrong OSU. The Buckeyes' Terrell Pryor showed Duck fans why Duck coach Chip Kelley wanted Pryor to come west so badly that he visited Pryor weekly during his senior basketball season.

Pryor led Ohio St. past Oregon for a 26-17 win in the Rose Bowl, with an effort that was incredibly similar to how the Ducks won the Civil War, and earned their way to Pasadena in the first place. At least now the Ducks know exactly how the Beavers felt on the night of December 3rd., except they aren't as cold.

Just as in the game that decided which team from Oregon would go to the Rose Bowl, the team that lost tonight scored first in the third quarter, for a lead that felt like it would hold up, but allowed a long, time consuming scoring drive in the first half of the fourth quarter. Continuing the pattern, the losing team, having fallen behind, couldn't score on their last possession, and then could not make a defensive stop to get off the field, as the winner converted multiple third downs, and eventually was able to run out the clock.

The loss concluded a 2-4 conference bowl season, where the LA schools prevailed, and the rest, well, didn't. Only Stanford was even within a score at the end. The upside is a lot of very young teams in a young conference should have learned some life lessons as well as some football ones, and will have the opportunity to redeem themselves next season.

Note to Danny Langsdorf, and all the other offensive coordinators in the conference: Consider assigning a pickup blocker to Oregon's Kenny Rowe. Rowe was the biggest deterrent to Pryor, getting three sacks, and as many hurries. Unfortunately for Oregon, one of those hurries was only a hurry, when two plays after Rowe's last sack, his grip on Pryor's jersey slipped, and Pryor proceeded to get away with throwing the ball up for grabs, and Jake Ballard went up for the jump ball, and came down with it too.

The 26 yard completion on third and thirteen led to the touchdown that gave Ohio St. a two score lead, instead of handing the ball back to the Oregon offense with more than half the fourth quarter to get one score in.

The victory for the Buckeyes was also the Big-10's first in a decade, since Wisconsin won the 2000 game 17-9 over Stanford.

So what went wrong with the Oregon spread offense? For one, Ohio State played defense with their offense really well, controlling the ball for over 42 minutes. The Buckeyes ran 94 plays to only 59 by the Ducks. Oregon's offense is well known for being able to win without the advantage in plays or time of possession, but 24 minutes and 35 plays is a lot of extra opportunities.

Oregon quarterback Jeremiah Masoli also never got a passing game going, completing only nine of 20 throws for 72 yards. That and a fumble for a touchback in the red zone more than negated a 70 yard rushing night by LaMichael James, who spent a good portion of the second half in the locker room, getting his shoulder checked out, and a great night by Kenjon Barner.

James was ok and returned, and didn't miss that much action, due to the fact that Ohio St. had the ball most of the time.

Barner rolled up unofficially 199 yards of total offense, including a nice fly sweep. Note to Mark Banker: Have your first defense work more against the first offense, and especially James Rodgers. If James is a Quizz clone, then Barner, who had a killer first down against Banker's defense in the Civil War, creates a lot of the same problems James does.

Masoli and Kelly weren't able to stretch the Ohio St. defense deep down field, which allowed the bruising Buckeys to play very physically in the short secondary, which is what they are best at.

If there is much second-guessing of the Oregon effort, this is the area where the questions will come from.

Meanwhile, Pryor, held on a very short leash down the stretch by Ohio St. coach Jim Tressel, was unleashed in the Rose Bowl. Pryor completed 23 of 37 passes for 288 yards and two touchdowns, in addition to carrying 20 times for 72 net yards, including the sack losses. 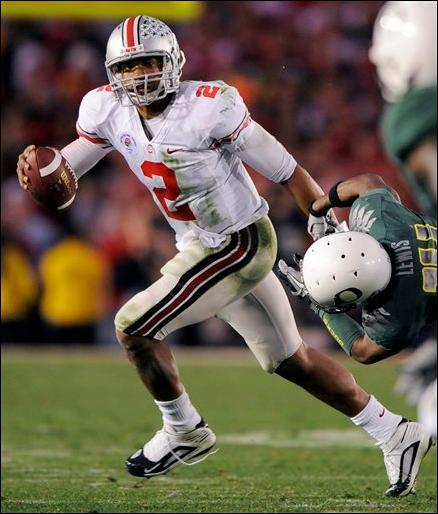 That's a lot of plays, and physical abuse, even for a 6'6" 235 pounder, but then the Rose Bowl isn't just any game. Pryor isn't likely to survive a season playing the way he did against Oregon, but for one game, he was too much to handle. Credit the usually very conservative sweater vest Tressel for the right game plan for the game. As he explained afterwards, just before acknowledging "We wouldn't be anywhere without the ‘Best Damn Band In The Land'!", "We do what we feel is best for Ohio St., and that isn't the same thing in every game."

(Note of explanation for the Oregon St. readers that are those that mostly are reading this, Dr. Chris Chapman, Director over all bands at Oregon St., including Dr. Brad Townsend's athletic bands, is an Ohio St. alum, and was as proud of his Buckeyes today as he is of his (and our) beloved Beaver band and footballers. Ask him the next time you see him on campus about that other OSU band, and why Coach Tressel was so quick to acknowledge them!)

So now its time to sit back, see how Cincinnati does against Tim Tebow and Florida, and then enjoy the rest of the bowl season, as the Pac-10 is the first conference to complete their bowl season, one the conference will consider a lost one in many ways.