Kristick Covers The Rodgers, The Vikings, and Las Vegas

Share All sharing options for: Kristick Covers The Rodgers, The Vikings, and Las Vegas

Oregon State linebacker Keaton Kristick's weekly column for the Sporting News Today is out, with his thoughts on the Portland State game, and everyone's favorite Beaver brother act (though the Unga brothers had a good weekend too.)

I thought we did really, really well against . We got out to an early lead. Sean Canfield gunned one deep, 87 yards to James Rodgers on our first play on offense. It kind of started the game off right. The Rodgers brothers are a lot of fun, and they’re really good guys.

During the week, we’re essentially two different teams: offense and defense. But when it comes to game time, it’s good to have them on our side. They’re really quick and agile. 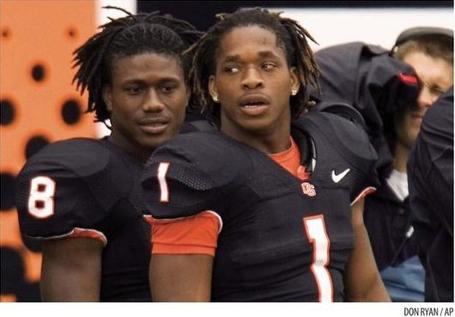 Kristick gave props to the new Beaver safeties in his review of the defense.

When you practice against guys like that with their speed, come game time, it’s going to be that much easier for the defense. Against , the defense had a shutout going for most of the game. They didn’t score until late in the fourth quarter. Our last game was a shutout in the Sun Bowl, and it would have been kind of cool to get two in a row, but it’s not that big of a deal. I think our defense played really well. We were swarming and really just getting after it.

They were playing like veterans: Suaesi Tuimaunei, Lance Mitchell, and Anthony Watkins. They all did really well.

Portland State had a spread offense, and we’re going to be playing a couple of spread offenses in the first couple of games, so it’s good to get used to playing against them, playing out in space as a linebacker.

Playing in Las Vegas will bring Kristick, from Fountain Hills, AZ, closer to home, and also afford him to play against an old opponent from high school. But while a lot of family and friends will have the opportunity to watch, it isn't like Las Vegas is familiar territory.

We’re really looking forward to this upcoming game at UNLV. They’re from the Mountain West Conference, which did really well this past weekend, so we can’t take them lightly.

Like , UNLV is going to try to spread the field out. They have a pretty good quarterback and a whole bunch of athletes, so it’s going to be a step up from last week. I remember playing against their running back, Channing Trotter, in high school in . It’ll be cool to go up against him again.

I’ve got 15-20 people coming up from to go to the game; it’s about an hour-long flight. I’ll probably trade with my teammates for tickets—that’s how we do it.

I haven’t really been to Vegas, not since I was a little kid. I’ve never used a slot machine before. But I think we’re going to stay in a hotel kind of away from all the noise and stuff. It’s more of a business trip than anything, but I’m

sure we’ll walk around a little bit, get a feel for the atmosphere. It should be kind of fun.

— As told to Jim Ryan