Jacquizz Rodgers is fine, and so is his shoulder, so hopefully every sportswriter covering the Beavers for the last month's favorite question can now be retired forever.

James Rodgers was obviously fine last spring, but has spent nine months winding his spring. Tighter and tighter, and tighter still. Pitty the poor Vikings in the secondary that had no chance. There is no feeling like having good coverage, bumping the receiver hard, and still being blistered. The message to Pac-10 secondaries was delivered; don't even glance in to see if play action to Quizz is really a handoff or not. Leave Quizz to the linemen and linebackers, and take your chances with that.

The opening kickoff of the second half, which James took into Viking territory, and set up 'Quizz's longest scoring run so far at Oregon State as well, supported that, and re-raised another question, "Why would anyone ever intentionally kick the ball towards James Rodgers?" 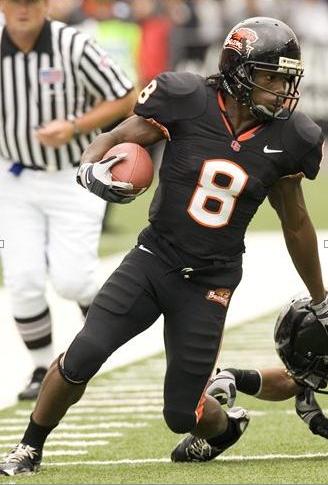 But was there really any question about the brothers? The only real suspense involving them was which part of the crowd they would throw some keepsake sweatbands to.

The offensive line was quite another matter. With zero starts on the left side, even the most zealous Beaver Believer had real questions about what would happen, especially against a veteran defensive line, albeit a Big Sky one.

The first test of fall term produced passing grades, however. Michael Philipp avoided what is often the downfall of otherwise solid linemen, something that showed so glaringly in Boise. When linemen are confused about assignments, and block no one because they aren't sure who to block, otherwise very good teams quickly look very bad, and it can be the whole program. Philipp turned in a solid job, and so did Grant Johnson at guard.

Watching from the endzone provides a completely differrent perspective on blocking play than the majority of the crowd, and the entire TV audience gets. Lateral movement is the discriminating quality in offensive line play, and while there is a lot of work still to be done, both demonstrated that they knew what they were supposed to do, and that they understood what to do when faced with an adjustment by the defense.

And with 'Quizz, all you have to do is engage the defense. Pancake blocks and gaping holes aren't needed.

By the end of the day, 14 offensive linemen saw time, and Coach Mike Riley couldn't have asked for all that he got under the circumstances.

The early start, coupled with drenching rain, which caused a last minute cancellation of the Beaver Walk, could have led to a real dismal experience, and surely held down the crowd, but the rain relented early in the game, resulting in perfect playing conditions.

As it was, the attendance was decent, 41,679, which displaced the 1980 Civil War for 15th. place on the all-time Reser attendance list. That still fell short of the Vikings' first visit, for the 2005 opener, which drew 42,263 fans, and is #14 on the list. Most encouraging, considering summer term finals are past, and fall term won't start for another couple of weeks, was a full student section.

Elvis was there, and BTD confirmed that despite what the Oregonian reported, he indeed did pick up the tickets presumably left by Jerry Glanville, the first time those tickets have been used in Glanville's long career.

The combination of the first viewing of the "I Am Orange" video on the big scoreboard, coupled with James' electrifying 87 yard touchdown on the Beavers' first play, set the tone for the day, quickly made the showery morning a distant memory.

The Viking offense was mostly sharp, though a couple of breakdowns they did have had to have concerned Glanville, and doomed any chances Portland State had to make a close game of it. QB Drew Hubel continues to show progress, and demonstrated the skills that had Riley interested in him coming out of high school, completing 20 of 37 passes for 252 yards. Future Big Sky opponents, never mind next week's Viking opponent Southern Oregon, will have their hands full.

Speedy WR Ray Fry, who caught 10 passes for 146 yards for the Vikings, also demonstrated a command of route running, with much of his success coming crossing under the Beaver secondary. That didn't go unnoticed by future Oregon State opponents watching the game.

Had the Vikings not lost starting RB Bobby McClintock to an apparent concussion early on, seriously derailing Glanville's original game plan to add more running to the run and shoot, the game might well have taken a different turn. At the very least, Oregon State might have felt the need to generate more offense, instead of working on the offense. As it was, it took most of the game for Oregon State to take the upper hand statistically in most categories.

One did feel that had there been a reason, or a need, Sean Canfield's strong arm and James Rodgers' speed meant another straight out speed score was available whenever needed.

The Beaver defense, having the most question marks, was of most interest. The edge speed rush was not nearly as effective as in the spring game and fall practices, but that shouldn't be a total surprise. Glanville and his staff have more total experience coaching in the professional ranks than any other college staff in the country, at any level. The Vikings were ready for the Beavers on the edge.

Hubel's effectiveness was in part due to limited pressure, which was due to the Oregon State defensive scheme. Very limited blitzing was used, in part in order to support the totally re-tooled secondary, and also to prepare for the spread offense the Beavers will face in a week in Las Vegas.

Various members of the secondary were a step off on occasion, but were facing a passing attack that might well exceed what they will see on a couple of times the rest of the season. The real question will be who emerges as the hit man, the guy that offenses must account for every play. The Al Afalava type. At this point, it is unclear who that will be. With the Rebel spread coming next, and then Cincinnati's Tony Pike coming to town, the focus in practice will be the defense the next two weeks.

Suasesi Tuimaunei and Lance Mitchell sharing the tackling lead with seven apiece is a bit of a concern, though facing the run-and -shoot can skew the numbers into the secondary. For best results, Oregon State would prefer to see as linebacker leading the tackle total. Instead, Keaton Kristic shared third on the individual tackle list, with six, and with Mitchell's backup Anthony Watkins. This with Kristic playing deep into the game, as the extensive substitutions came earlier on offense than with the defense, where the two deep was destined for a lot of work regardless of the lead.

Despite being third in tackles, Kristic seemed to have a relatively low frequency of impact plays, at least directly. That's something Beaver fans better get used to, though it doesn't mean Kristic wasn't a force. Portland State avoided Kristic's area on the field a lot, which, when coupled with the limited blitzing by the Beavers, was bound to hold down Kristic's tackle count.

Don't think that didn't impact the game though; when a player impacts play selection, he has done a good job without laying a tackle on anyone. Watch for more teams to run away from Kristic a lot.

That said, Kristic's reach-around tackle on the goal line stand was a classic demonstration of speed and strength. The entire sequence of the stop that saved the shutout for a while longer may have been the Beaver defense's best moments.

By the way, for those who think Quizz is the Beaver having the most fun, and he is having a blast, they should take a good look at Kristic. The kid just seems to always be glancing around with a grin on his face that says "This is just too cool!"

The special teams play of punter Johnny Hekker, who averaged 45.7 yards per punt, and place kicker Justin Kahut, who hit a career long 50 yard field goal, and consistently showed an ability to directionally kick into the corner without the kickoffs going out of bounds, was outstanding. The progress both kickers have made since the middle of last season, when Hekker was on the verge of losing his job, and Kahut, who was considered both inconsistent and short, approaches amazing. And could be the difference maker while the defense is developing.

Taylor Kavanaugh had a solid day on special teams, and joined what is at best a very small group, of brothers who were holders for teams opposing each other, as Connor held for the Vikings.

The only real disappointment with special teams was not getting to see James Rodgers make his debut as a punt returner, something the Beaver coaching staff has hinted was in the works. Anything to get the ball in James' hands would appear to be a good idea.

The decision to not redshirt several freshmen seems sound as well, as Marcus Wheaton looked like the loss of practice was only a minor setback, and Jordan Poyer complimented sound special teams coverage with a solid 30 yard kickoff return. Poyer on special teams, much like redshirt Jordan Bishop on offense, displayed both the gliding speed to cover a lot of turf quickly, and not the willingness, but indeed a desire, to stick themselves into an opponent.

The absence of Darrell Catchings at wide receiver wasn't the concern it was feared to be, and Damola Adeniji was the reason why. Adeniji, who picked up the remainder of Brent McNeil's scholarship when McNeil left the program and the school midweek, looks like the latest on the list of Riley success stories with players that not so long ago had trouble finding a Community College that had any interest in him.

Oregon State's early and gradually growing lead afforded the opportunity to use a lot of players and packages. The encouraging thing wasn't getting nearly everyone into the game though, it was the fact that there was almost always a sense that whomever was in had a good idea as to what they were doing. Often these bench clearing situations turn into a lot of erratic and confused play. The single thing that surely pleases Coach Riley as much as anything was his team's focus. A lot of players who saw action Saturday won't see that much more playing time, but a lot will.

The rest of the conference had to consider opening day a good one as well, as USC and UCLA have to be happy with their initial effort, even considering the opposition, and Arizona State did a better job against their Big Sky opponent than Oregon State did.

But the most impressive performance has to be by Cal. The Golden Bear's 52-13 win over Maryland, including Jahvid Best's 73 yard scoring run, and Kevin Riley throwing for four touchdowns, validated a lot of lofty preseason predictions for Cal.

Even Husky fans, despite watching a Pac-10 record tying 15th. straight loss (and a lot of them did), have to be encouraged. Washington was competitive against a good LSU team, and the final score of 31-23 was under the double digit spread most of the country expected. And Husky stadium was rocking. The place is made of concrete, but ESPN cameras couldn't hold a steady image for most of the game, thanks to the re-energized Washington fans that are more convinced than ever that new coach Steve Sarkisian will soon enough have the Huskys back in the hunt.