Can We Put the QB "Controversy" To Bed?

Share All sharing options for: Can We Put the QB "Controversy" To Bed?

Having snatched defeat from the jaws of victory for the second straight week, the Oregon State Beavers have a couple of key issues to address, issues so significant a lot of other ones become secondary no matter their importance.

Having lost their sixth consecutive Pac-10 opener, the tough one isn't, in my view, the one at quarterback, but more on that in a moment.

It's the lack of pressure on opposing quarterbacks that is making a UNLV backup and a first-game starter for Arizona in Nick Foles hard to distinguish from Cincinnati's Tony Pike.

This will be the hard one to solve to, because it is apparent that Ben Terry, Kevin Frahm, and Gabe Miller and Matt LaGrone, are busting their tails, giving their all every down. They are the best the Beavers have to offer on the edges. Unfortunately, it has also become apparent that they do not have the strength and ability, be it by swim moves, rips, bull rushes, or whatever, to dis-engage themselves from Division I grade offensive linemen, and get upfield with any consistency.

Much more so than problems in the secondary, the absence of sacks (Oregon State is worst in the country at getting the opposing QB down), or even serious pressure on the quarterback, is what has caused the Beavers' depressing defensive numbers.

And with a group of defensive ends physically caught in between really strong and really fast, finding a solution will tax defensive line coach Joe Seumalo and defensive coordinator Mark Banker to the limit, as they have limited options. The solution will have to come as much from other areas as from the area with the primary problem.

Statistics don't lie, but they can allow one to mislead themselves. Because, despite their poor total defense and pass defense numbers, the Beaver defense has still had the team in position to contend for the win the last two weeks. What proved to be the winning touchdown came while linebacker Keaton Kristick was out, and thru holes Kristick usually closed. 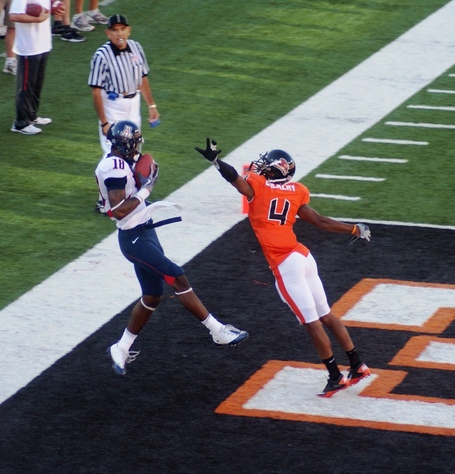 Despite, and after giving up this early touchdown, Oregon State's James Dockery's defense improved as the game progressed, and made a couple of key plays in the second half.

Which leads to the issue Oregon State can choose to try to do something about.

It's been unpopular in some circles outside Portland to pressure for a change at quarterback from Sean Canfield to Lyle Moevao, and yesterday's statistics could be used to continue to argue against a change. Sean threw for more than 300 yards, and leads the Pac-10 in passing yardage and completions.

But those stats could mislead one to believe things are working well enough offensively. Those stats also do not, and should not negate the overriding problem of poor decisions at key times.

At key moments, with the game at stake, of all possible choices available, Canfield made possibly the worst choice possible, resulting in sacks and interceptions. While opposing quarterbacks are turning similar situations into big plays, by making the right decisions.

It is difficult to call for the replacement of Canfield, someone everyone, myself and his backup included, really, really want to see succeed. However, the cause of the problems are not only predictable, they are the same issues that were most distressing years ago, in his first appearances.

Locking in on receivers leads to interceptions, and in both of yesterday's picks, it was apparent to everyone, including the Wildcat secondary, who the pass was going to several seconds before the ball was even released.

Standing in the pocket too long, and not throwing the ball away rather than taking a loss, is squarely on the quarterback, not play calling or the offensive line. One sack came after the line held up for six seconds, another when they provided seven seconds to make a decision.

The offensive line that struggled earlier in the year provided good protection. The story of the game was not about the Rodgers' brothers' production, 404 total combined yards, but about critical mistakes elsewhere.

Even the touchdown to Damola Adeniji was a poor throw that two Wildcats tipped. It's to Adeniji's credit that he stayed with the play, looking to make the tackle after what he expected to be an interception, and was able to save the situation as a result.

"I was cutting back across the field looking for what I thought was going to be an interception to make the tackle," Adeniji said. "It just happened to fall my way, and I caught it."

With Arizona's star running back Nic Grigsby knocked out of the game with a shoulder injury on the Wildcats' first play, Keola Antolin, who has a lot of the bouncy elusiveness that makes Jacquizz Rodgers so effective, was impressive initially in Grigsby's absence. But he too was slowed with a leg injury. A new QB with a depleted rushing attack should have been hard pressed to put five touchdowns on the board.

Starting the third quarter with a three point lead, the Oregon State defense stopped a twelve play Arizona drive, only to have Canfield throw an interception on a poor throw on the next play. The Wildcats eventually proceeded to score, after running 19 plays, and burning nearly nine minutes of clock, before the Beavers would get the chance to run their second play of the period. Four plays later, another sack ended that series.

After the game, Coach Mike Riley admitted the third period was "Terrible." But it was untimely mistakes that overburdened a defense that needed some help that really hurt, more than the defense's own shortcomings.

And the worst was yet to come. After the second interception, the crowd which was for the third time this year the 15th. largest home crowd in Beaver history, largely started to abandon the team, and the stadium, but the defense didn't, using time outs and holding Arizona. Still needing only a field goal to force overtime, the Beavers had half a minute to work with.

Arizona punter Keenyn Crier's third punt that pinned Oregon State on their own three of the game cemented him as the Pac-10 special teams player of the week, and didn't help the Beaver's cause, but they still had a chance.

The one thing they could not have was a safety, which is, of course what Canfield took after the line held up for five seconds, in a situation where the ball had to come out fast.

Still more fans poured out, but the Beavers were still not defeated. Justin Kahut delivered a perfect on-side kick, and it appeared to be Kevan Walker flying thru the air to make the recovery.

The Beaver band, now grown to 215 members, the largest in modern times, cranked up, and the student section kept cheering, as Oregon State special teams had actually improved field position, out to the 34 yard line.

But with still 23 seconds left, Canfield never got a pass in the air, twice taking sacks.

Whether Moevao will be able to do any better is still unknown, but it is worth a try. And not unreasonable, or unprecedented.

The argument so far against using Moevao has been that he still doesn't have the arm strength to go down field. On his one play, he did, and the throw came out quick and strong. The fact that it was no where near anyone is a product of the fact that receiver Jordan Bishop broke his route up the seam, while Moevao threw to a spot, expecting an out route. Whose' error that was is unknown, but it was not a problem with arm strength or throwing motion.

Another of the defensive problems has been in the secondary, where safety Suaesi Tuimaunei has been torched so often Corvallis Fire had to respond to the bench to extinguish burning embers. There's no evidence Tuimaunei wasn't trying, or isn't a good guy, but he was replaced. For the simple reason that his shortcomings were jeopardizing all the work of about a hundred other players, not to mention many more whose' efforts are tied to the program.

Whether that change will help only time will tell, but what was happening wasn't working well enough, so it was time to at least try another option.

Because there is a viable alternative, the same situation exists behind center. 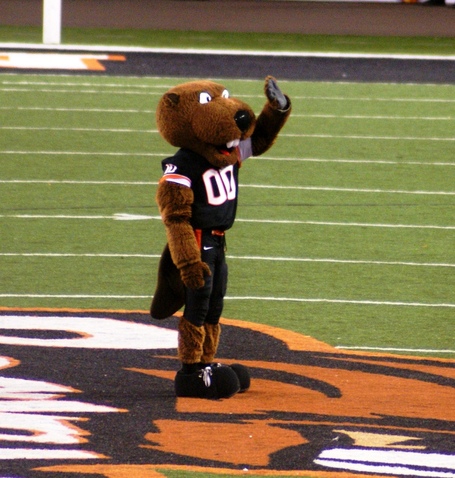 Will it be bye-bye Sean, or bye-bye season?