Share All sharing options for: We’re looking forward to playing a running team

Keaton Kristick's weekly column in the Sporting News Today looks at the differences in the type of team Oregon State will face against the Arizona Wildcats, a drastic change from the three pass-happy opponents the Beavers opened the season against.

We have another opportunity this week against Arizona. We didn't make the most of our last

one against Cincinnati. It's one of those games you really wish you would have won, but at the same time, we have to move forward. It could have helped us move up in the rankings, but other than that, I don't think it really hurts us too much.

On the bright side, I did have my first career interception. I was considering jumping over some

guys and maybe doing a spin move or two, but I was sucking wind the play before and was a

little too tired, so I went down after about 14 yards.

Still, I was really excited about it. It put our team in a situation where the game would have been

The disappointment after a loss can only last for so long. You get 24 hours before you really have to start watching film of your next team. Arizona runs the ball more than our opponents so far this

season, and we're looking forward to playing a team like that.

For the past three weeks against teams that spread the field and throw a lot, I've been playing

pretty much outside the box, out on the hashes and away from the action. It seems like I was never where the ball was, and that's frustrating for a linebacker. So I'm looking forward to these next couple of weeks, when we're going to start seeing a fullback or a tight end.

When I'm playing, I like messing with my alignments, showing that I'm blitzing, not blitzing, disguising. I think I do that really well. Troy Polamalu-I'm not trying to compare myself to him by any means-but you never really have an idea what he's going to be doing. I like doing that. I don't like sitting in the box, waiting for the snap and then playing. I like rolling around and not being the target. I also like to use size to my advantage. Going up against linemen who are like 6-5, 330, I think I can use speed against them. 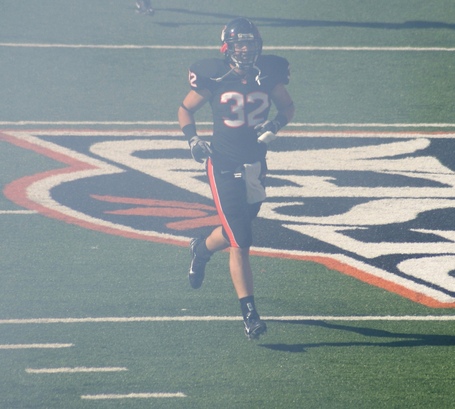 Keaton Kristick wouldn't likes the opponent to have only a hazy idea of where he is at.

Playing Arizona at home to open up our Pac-10 schedule is a really good scenario for us. We know their personnel a lot better than the teams we've played so far. We've played against them before; we know what to expect.

School starts for us this upcoming week, and I think that will help a lot, too, just having the students with us. We don't lose at home too much, and I never really realize until afterward that it's an unfamiliar feeling. The Cincinnati game definitely left a sour taste in our mouth, and we're looking to rebound from it.