What We Learned, And What We Need To Learn

Share All sharing options for: What We Learned, And What We Need To Learn

The biggest non-conference game in the history of Corvallis is over, as is the 26 game home non-conference winning streak. And quite possibly the biggest upset of the Pac-10 season is too. Hard to say if the post game party on Montlake is over yet, though.

The Mt. West, or at least the state of Utah, is out of the BCS-busting business, at least for the time being. And traffic on I5 is back to normal, at least until next weekend, when another Ducks/Beavers home double header again overwhelms the system.

First, the good news (about the defense). It's not that bad, despite being ranked 109th. nationally against the pass, and is getting better. After three straight weeks of variations on the pass, pass, then pass some more approach to offense, that stat can't help but improve after this week's visit by the Arizona Wildcats for the Pac-10 opener.

James Dockery was the surprise of Saturday, and though Bearcats star Mardy Gilyard had nine catches, he was held to just 65 yards. It will be interesting to check back as the season progresses, but while Oregon State gave up quite a few yards (over 400), it is doubtful that the Bearcats will be held to 28 points, at least in games where weather isn't the overriding factor, very often this season, if at all.

Now the bad news. That surprisingly good looking edge rush seen during the spring and fall camps was more a reflection of the offensive line it was going against than how good it really was. The statistical sample is now large enough to draw some conclusions from, and the biggest one is that the Beaver defensive front is well-constructed to stop any less than great rushing attack pretty well (Note to Mark Banker, what we will find on the trip to Berkely won't be one of them. The Cal equipment manager should just recall Jahvid's jerseys, and change the name on all of them to Beast.)

Lacking the luxury of NFL draft first-round picks at the defensive end positions, the trend in college football is to either uber-fast ends that look more like running backs, or alternatively, enormously strong ones that can consistently man-handle offensive tackles. Ben Terry and Kevin Frahm are caught somewhere in the middle, and top quarterbacks like Tony Pike (and Jake Locker, who may be the only elite QB in the Pac-10 at this point) aren't phased by pressure that is anything more than an arm's length away. 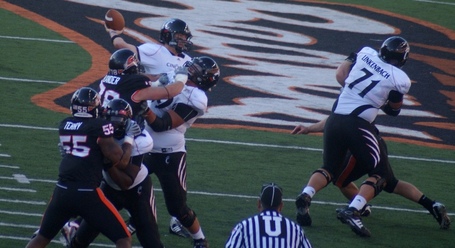 Military day is over, so calling in an airstrike probably won't be an option. 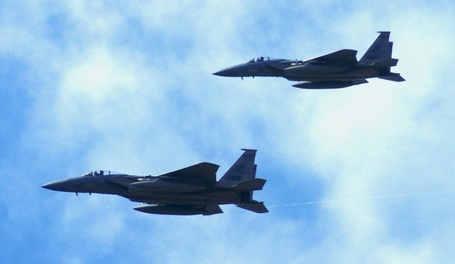 Can the Beavers construct a blitz package on the fly without being bled to death by 5-10 yard completions? Are they willing to try? It's a concern that no individual besides Keaton Kristick has established himself as being able to be a force on a consistent basis. After a great game in Las Vegas, Lance Mitchell became a consideration for the Bearcats, who promptly prevented him from being able to be in the middle of everything. The lack of an anchor player could be the single biggest deterrent to the blitz packages Beaver fans are really starting to clamor for. When the blitz doesn't work, who can be counted on to clean up?

The good news about the special teams is they clearly are good enough to win the game if the rest of the team can put them in position to do so. Justin Kahut shook off his brief stint of inaccuracy before he ever left Las Vegas, and showed no signs of problems Saturday. And Johnny Hekker was again consistently effective.

That's no small foot feat, considering conditions Saturday. When I first walked into Reser, it was under the jumbo-board, and I was hit by the wind that was funneling in from the northwest corner, and blowing straight at the scoreboard end. My first thought was that the wind would be a factor, and it was no accident that Cincinnati's offensive success all came with the wind at Tony Pike's back. Kahut being three of three of field goals in that wind was impressive.

But while the defense was ok despite the lack of pressure on Pike at times, and the kicking game was a strength, the offensive struggles portend more struggles to come. The low-volume buzz the last two weeks about the lack of push in the middle by the offense isn't low-volume anymore. While the talk on the radio shows is about the play calling (more on that shortly), it may well fall to offensive line coach Mike Cavanaugh to define how the season goes.

Less than optimal television camera work in Las Vegas didn't expose a couple of issues nearly as well as a clear view from the ends of the field, contrasted with the typical view TV and most fans see did.

Discarding a few plays here and there, the problem with the running game isn't that the line is losing the battle, it is that they just aren't winning it.

The inside stuff should be working better, because the gaps are there, at least initially. And while much hand-wringing by Beaver nation went on about freshman tackle Michael Philipp and new starter Grant Johnson on the left side, the right side is surprisingly struggling. Surprising because of the solid job Mike Remmers did last season. But the success Cincinnati had collapsing to whichever side of Remmers they wanted to, coupled with Gregg Peat often apparently waiting for the defense to come to him, when his block on a linebacker was all that stood between Jacquizz Rodgers and the secondary, does not bode well for the Beavers. 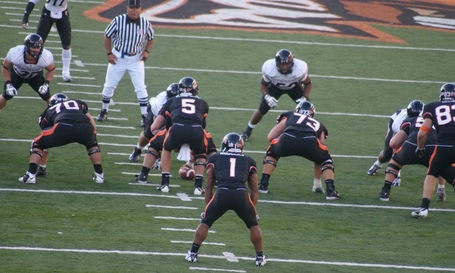 Similarly, the frequent fly sweeps that radio voice Mike Parker notes always have a chance to be a big play too often didn't. The blocking consistently engages the defense, but the concept of the seal block that stops the defensive flow, and the tactic of the cut block to accomplish it, both generally taught early in Football Line Play 101, are absent so far. Fortunately, fall term classes are imminent.

The call for a change at quarterback which started with a media push from the Portland area last week no longer needs anyone promote it. Quarterback Sean Canfield reverted to the old ways of the old days, and was sacked five times as a result. The high throw misses were another sign that two years of progress had at least temporarily been forgotten.

And it resultied in a renewed call to try Lyle Moevao at quarterback, before the game even ended. The argument that Lyle isn't yet strong enough to through the deep ball, while possibly true, doesn't wash either, as there have been no attempts to do so for three games now, with a quarterback that does have the arm strength to do so.

The debate hinges on the importance of stats vs. the "it" factor at quarterback. When the program markets itself in the prices of its tickets and its sweatshirts as an elite program, the fans quickly expect the results to match.

Results that won't meet acceptable standards as long as a run of penalties, missed assignments, and not even knowing who is supposed to be in the game, continues. Three weeks into the season, with two of the games at home, that's an aspect to the problem that no words exist for.

Not many printable words come to mind for the fumble fiasco forward progress controversy either, but while the Pac-10 still needs to work on both the handling of such situations, and the aftermath, the Beavers were overdue for such an episode. And can't be letting themselves be put in a position where one incident like that overcomes them. The defense never got oriented for the rest of that drive. When you know you can eventually count on a situation like that happening, you need to plan for it.

We also learned this week is that the Ducks have an unlimited number of ugly uniform options (where did white helmets and gray pants come from for a team with green and yellow as their primary colors), and a quarterback in Jeremiah Masoli that had U of O fans texting OSU fans about how desperate their situation is, after Masoli turned in a 4 of 16 performance against Utah, but still leaned on enough other aspects of the game to get the win in their opportunity against a ranked opponent. Score one for the "it" factor.

And we learned that the University of Washington Huskies are for real. Especially on defense, which was the last aspect of Husky ball expected to make a recovery. Remember back a few weeks, when we were all projecting the conference race, and how well the Pac-10 would do in the national picture? I don't recall anyone predicting that after three weeks, USC would be outside the top 10 in the AP poll, and the only northwest team ranked would be the Huskies, and not either the Ducks or the Beavers. 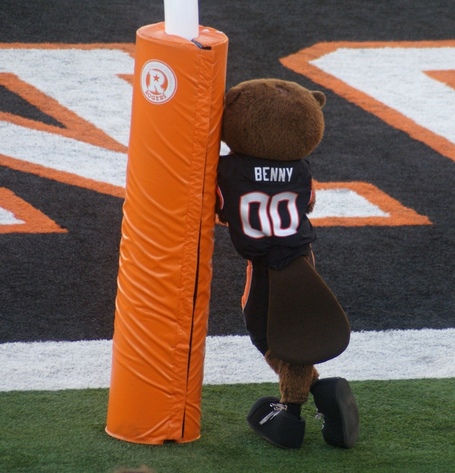