Kristick: 'Cincinnati is going to be really tough'

Share All sharing options for: Kristick: 'Cincinnati is going to be really tough'

So says Keaton Kristick in this week's edition of his weekly column in the Sporting News Daily, which starts with a review of the highlights of the UNLV game.

We had a close game at UNLV last Saturday. Our defense did really well in the beginning, and the offense put up some points early in the second half. Then UNLV got a couple of breaks, and they got the momentum on their side.

They came back at the end of the fourth quarter, and we held them off with a field goal with seven seconds left. 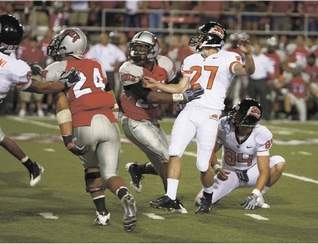 We're just glad we beat UNLV, because they were a good team, and we definitely respect them.

Kristick goes on, recounting his key fumble recovery and return, after the big hit by Lance Mitchell.

In the second quarter, I had a fumble recovery. There was an out route, and the guy caught it in open space and tried to jump over one of our players. Lance Mitchell, one of our safeties, really gave him a pop, and the ball came out. I just locked eyes with the ball and hoped I'd pick it up. I grabbed it and just started chugging away.

I was going to try and pitch it back, try and make a play, but at the same time my running back instincts from high school kicked in, and I tried to get upfield as far as I could. I ended up going about 18 yards to our 30 before one of their linemen came at me at full speed and just smashed me along the sideline. I just tried to hang onto the ball. Our offense scored after that, which really helped us.

And just as things quickly truned to thoughts of this week's Cincinnati game Saturday night, Keaton shifts to look ahead at the Bearcats.

After the game, there was a lot of excitement in the locker room. We haven't been 2-0 in a while, and to be 2-0 heading into the Cincinnati game is good. Cincinnati is going to be really tough. They run a similar offense to the last two teams we played, and it's very potent. They scored 70 points against Southeast Missouri State last week. They spread the ball out really well. We just have to be ready for it.

We lost at Cincinnati a couple of years ago, so we have a sour taste in our mouths watching film and stuff. We were there for a couple of days, just trying to get acclimated to the time difference and stuff like that. It was a few hours forward, and it was messing with our sleep a little bit. That's no excuse, but then they got off to a good start, and we really couldn't do much offensively that game.

This game could really help us as we try to get off to a good start before Pac-10 play. We're back at home, where the fans will be on our side, and the momentum will hopefully be on our side. It's going to be a classic college football game.

Classic indeed, as it will be the biggest non-conference game ever played in Corvallis. It been 32 years since a nationally ranked non-conference opponent has visited Corvallis, since 13th. ranked BYU came to town in 1977. And it has never happened when the visitor and the Beavers were both ranked.