‘Quizz is Being Watched

Share All sharing options for: ‘Quizz is Being Watched

This past week saw Oregon State’s Jacquizz Rodgers named to a pair of national watch lists for prestigious awards. 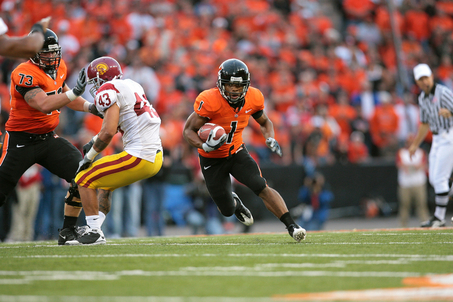 ‘Quizz, the reigning PAC-10 Conference Offensive Player of the Year after rushing for 1,253 yards (second most rushing yards in the conference) and 12 touchdowns TD, is one of 30 on the 2009 Walter Camp College Football Player of the Year watch list.

Three other PAC-10 players are on the, including California junior RB Jahvid Best, Oregon senior RB LaGarrette Blount, and USC's senior DB Taylor Mays. Another upcoming Beaver opponent, Cincinnati's senior WR Mardy Gilyard, is also on the list. The winner is selected by a vote of the Bowl Subdivision head coaches.

‘Quizz is also one of 45 on the 2009 Doak Walker watch list, which names the top collegiate running back of the year.

Best and Blount, as well as Stanford senior Toby Gerhart, and Arizona junior Nicolas Grigsby, are the other PAC-10 players on the Walker watch list.

The semifinalists will be announced on Nov. 11, and the finalists on Nov. 23. The winner will be announced on The Home Depot ESPNU College Football Awards Show on Dec. 10 from Orlando.  The Doak Walker award is the only one of the major collegiate awards which requires that all candidates be in good academic standing, and on schedule to graduate within one year of other students of the same classification.