Hey Jerry! Are Those Tickets Waiting For Elvis?

Share All sharing options for: Hey Jerry! Are Those Tickets Waiting For Elvis?

Most football fans are aware that Portland State Viking football head coach Jerry Glanville is a big Elvis Pressley fan. So much so that he always leaves a pair of tickets for each Elvis, though reportedly, they have never been picked up.

Look for that streak to come to an end this Saturday morning, as one of Glanville's teams has finally scheduled a game that fits into the performer's schedule. 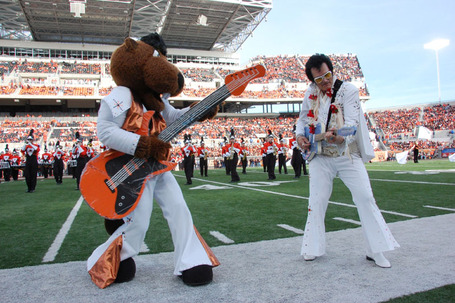 And being a musician, Elvis regularly bypasses to Club Level at Reser, preferring to hang near the Oregon State University marching band.

A good thing, as the tickets available that Glanville can obtain will be down on the east end, near the scoreboard.

Of course, as Elvis, being a regular, is a season ticket holder. So he won't need those extra two tickets, which should mean an opportunity for a couple of Elvis' best fans to see the Beavers take on the Vikings, with kickoff at 11:35 Saturday morning.

Being a regular reader of BuildingtheDam.com, perhaps Elvis will choose a rare BTD reader who doesn't have tickets, but has a good story to tell? 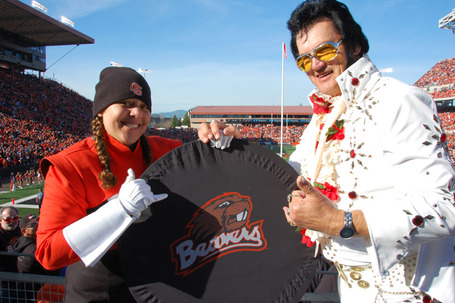