Share All sharing options for: Beaver Huddle: An Orange Revival

The annual start to the fall season for Oregon State athletics in the mid-valley, Friday's Albany Beaver Huddle kickoff event, was supposed to be a picnic in the park, but turned into an old-fashioned revival, thanks to the Beavers' football team mom, Shiela Moevao.  (Don't mess with her, she has about 107 sons.)

Showers prompted the event, originally scheduled for Montieth Riverfront park, to be moved to the gym at the Albany Boys and Girls Club, and Ms. Moevao had the overflow crowd of Beaver Boosters on their feet with her motivational message.

"God called me to live in Corvallis", Moevao declared. 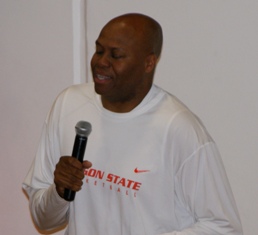 Ms. Moevao shared with the crowd about Oregon State being named the #1 family atmosphere school of all the 120 Division I football programs, and proceeded to lead the song "We are family." In the process, we learned mens' basketball coach Craig Robinson has got rhythm too, chiming in with the "I've got all my brothers with me" line.

Ms. Moevao shared pearls of wisdom, including that she "understands the power of a meal," with a story about getting Lyle to bring all the offensive linemen and the Rodgers brothers to breakfast last season, when "Momma was cooking." And motivating the line to raise their game. The results, as was seen against USC, WSU, and Washington, among others, were obvious.

Ms. Moevao concluded her presentation with the message "God must be a Beaver."

In addition to Ms. Moeavo's revival, event emcees Doug Oxsen from the Beaver Athletic Scholarship Fund (BASF), and a member of the Oregon State Basketball team under Ralph Miller in the mid-70's, and Mike Parker, the voice of the Beavers, introduced a number of speakers from a variety of Oregon State Programs.

Dr. Brad Townsend, director of the Oregon State Marching Band, brought a contingent, who revved up the large crowd with the fight song and the Beaver spell-out, among other favorites. 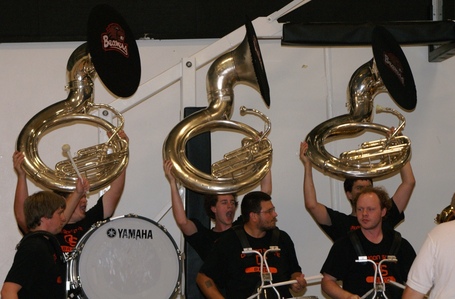 Townsend also shared that the marching band, the oldest band in the Pac-10, will be increased from just over 150 members to 210 this season. 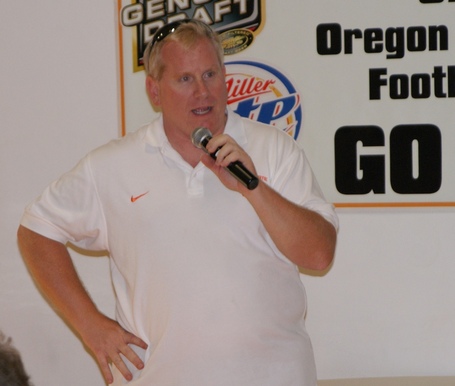 Mens' golf coach Brian Watts introduced Nick Sherwood, the #1 recruit from the state of Oregon, and the son of Bill Sherwood, another former basketball player for Ralph Miller.

Both womens' and mens' rowing, and gymnastics took their turns in front of the crowd, as did wrestling assistant coach Troy Steiner.

Football coordinator of support services Gary Beck, one of the few in attendance that was present for all three of the "Giant Killer" wins over USC, gave an update on football practice, and also about what has become a new era in recruiting at Oregon State.

"Football recruits now can't remember us losing. I don't have to make up stories any more; I can tell them the truth"

Robinson concluded the evening, touching on last season's success and prospects for the upcoming season, and even a possible new and improved tactic for distracting the opposition at the free throw line.

Townsend had explained that the one downside to the growth of the band is a shortage of uniforms, possibly resulting in nothing for the drummers to wear. Robinson recalled that in the CBI tournament, in the overtime win over Stanford, one of the drummers slowly tossed a baton into the air each time a Cardinal attempted a free throw, and down the stretch, almost all of them were missed.

On a more serious note, Robinson, an admitted pessimist, expressed optimism for the coming season.

"I'm confident we will have a better season this year, based on how these guys are working in the off-season." 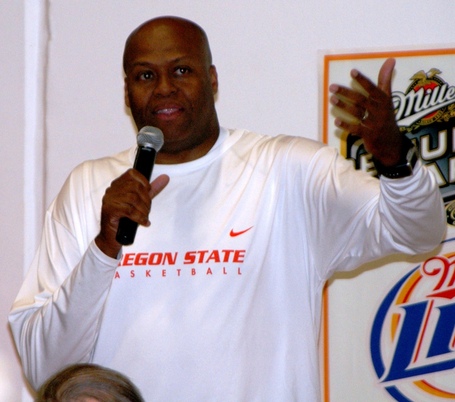 Robinson noted that three of the five recruits have been in Corvallis, working out since July 15th. But while the returning players have told him the new players will all help the Beavers as soon as this season, there will be no easy minutes to be had.

"Josh Tarver told me that Roeland Schaftenaar is teaching Angus Brandt, but he isn't giving up anything." 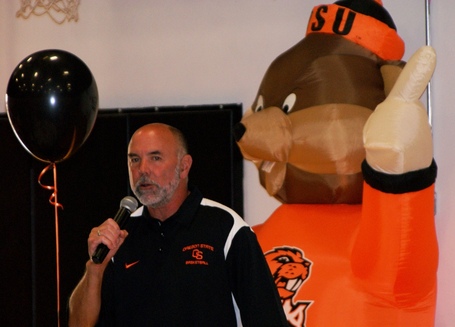 Mike Parker, the voice of the Beavers for the past 10 seasons.

Parker also shared both a story about getting a hug from Josh, and an assessment of Rhys Murphy.

"My brother (Seth Tarver) is beating him up everyday."

Robinson also encouraged the crowd to continue to turn out in ever-increasing numbers.

"When Gill is packed, we win games."

Robinson concluded the evening by taking some questions from the crowd. Regarding 5:30 AM practices,

"The players didn't want to practice later. I was tired, and because they had worked hard, I offered to change to practicing later. But they said ‘No'. And now they want the young guys to go thru that, so we will practice at 5:30 AM."

The questions was asked as to whether Robinson's sister, the first lady, will be attending any games this coming season, to which Robinson replied,

"My sister will be here for the ribbon cutting for the new practice facility."

Robinson then amplified on an earlier appeal from the rowing teams, who had reviewed the lack of plumbing in their locker "room", near the rowing shed.

"To bring in the best players, you need facilities."

Robinson finished by endorsing the facelift of Gill Coliseum.

"I thought I wouldn't like the new paint job, but I love it, now that I've seen it. Everyone should check it out when you are across the street for the Portland State game in a week."