Buster Sports On The Beavers

Share All sharing options for: Buster Sports On The Beavers

Nick Daschel of Bustersports.com has his best and worst case preview of Oregon State out, and even the worst case scenario has the Beavers at 7-5, and obviously in a bowl. Best case is a Holiday Bowl win, and the most likely outcome is an 8-4, 5-4 in conference year, including a 17th. consecutive loss at Arizona State.

Daschel is on to one of the key points to the upcoming season that hasn't been talked about nearly as much as the road games against USC, Cal, and Oregon, or the preseason slate for that matter. The Beavers haven't won in Tempe against the Sun Devels (a game like that other game they played down there, the 2001 Fiesta Bowl would be nice) since 1969. Breaking that streak, at former coach Dennis Erickson's expense, could be as big a win as any of the big ones in recent years in the process of the Beavers' ascent. 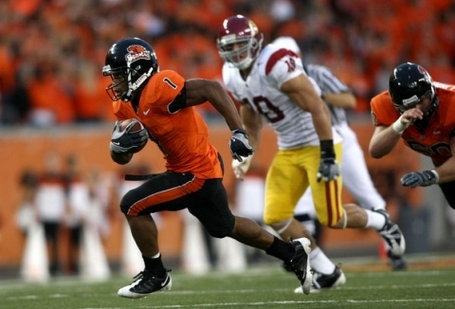 Jacquizz Rodgers gets the big picture, but brother James gets the nod as the "Player not to miss."

Jacquizz Rodgers might be the league's reigning Offensive Player of the Year (ed. note, no might agout it, ‘Quizz IS the OPOY), but it's his brother James who can really light up a football field. Fly sweep, short pass and run, kick returns ... James Rodgers is good for at least a couple of dynamite plays per game.

Daschel also ranked the Pac-10's Kickers, putting Oregon State's Justin Kahut third on his list, behind Arizona State's Thomas Weber and UCLA's Kai Forbath). (Thanks to Nick for documenting for the nation the OSU profile's note on how to pronounce Kahut's name too.) 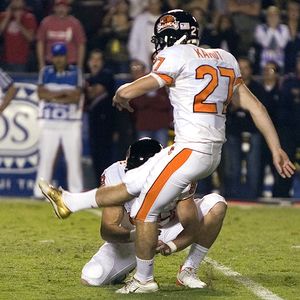