Share All sharing options for: I could see spending the rest of my life in the Northwest 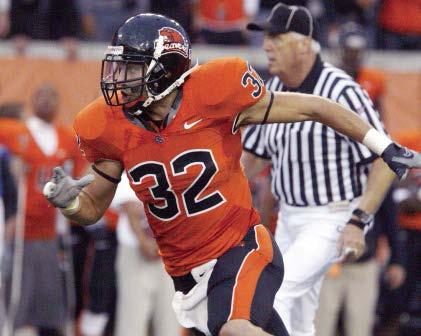 Keaton Kristick formally introduced himself to the nation today, with his first column in the Sporting News Today.

Part of a full platter of Pac-10 news that also included a full-page interview with Stanford RB Toby Gerhart, and the Sporting News rundown of the Oregon Ducks, ranked #7 in the SN pre-season rankings, Kristick told the story of his recruitment, one of many with the now-familiar theme of honest communications by the Beaver coaching staff.

Oregon State was my first scholarship offer. It happened the day before my birthday my junior year of high school. It really meant a lot to me that they were the first school to offer me. They were down-to-earth type people, people who you could talk to. They were also really honest when it came to recruiting, and it has stayed that way since I've been there. I kind of knew I was going to come to Oregon State after the first time I visited.

Kristick admitted to enjoying the green northwest, a definite contrast from the brown desert of his home town of Fountain Hills, AZ, but revealed one gap not yet resolved in Corvallis.

I really like the Northwest and could see spending the rest of my life here. I definitely have to visit In-N-Out Burger when I'm back in Arizona, though.

The Sporting News Today will have additional entries from Keaton thru the season, designed to not only give an insight into Oregon State Football, but into the person and the program as well.

Kristick explained he spent much of the summer getting ahead of the course-work curve.

I stuck around Corvallis this summer taking a whole bunch of classes, trying to get ahead. I'm trying to graduate early so if the opportunity presents itself, I could possibly go to NFL OTAs next spring. I'm majoring in business right now with an option in management. I don't know where that will take me.

It wasn't all work and no-play for the leader of the Beaver defense though. as Kristick discussed the OSU gaming scene, and his inclusion as content, not just as a player.

Aside from going to class this summer, I worked out and played video games with my friends. Joe Halahuni, a tight end who's going to be one of our breakout players this year, is probably the best gamer among my teammates. I also play with Lyle Moevao, one of our quarterbacks, as well as some friends from campus, and my little brother back home. We just get together and have fun playing, whether it's Call of Duty or college football.

Growing up, I always wanted to be in a video game, and now I'm in the NCAA Football games. My goal was to have a 90 rating by the time I was a senior, and I came in at 89 this year. I was like, ‘Man, one
point away.'

There is also a half-page Pac-10 news rundown, including USC coach Pete Caroll's discussion of his choice of true freshman Matt Barkley to be the Trojans starting quarterback for the season opener against San Jose St.

He has exceeded all our expectations. He has all the physical ability. He has the mentality and temperament to handle the position. His personality is very well-received by all the players, and he's extremely talented. At this point, he's ready to be the guy for us.

Barkley, will be the first freshman ever to start for the Trojans in a season opener, and ascended to #1 on the USC depth chart over sophomore Aaron Corp after Corp cracked the top of his left fibula, in the knee.