Beavers #16 in the Sporting News Countdown

Share All sharing options for: Beavers #16 in the Sporting News Countdown

Oregon State is ranked #16 by the Sporting News in their pre-season countdown, and is featured today. "Riley's results" gets the lead billing, noting the Beavers' ability to get maximum results in the face of personnel turnover.

Any other team facing Oregon State's challenges would probably be ranked much lower than 16th nationally. But the Beavers deserve a slight premium based on coach Mike Riley's ability to produce winning teams regardless of personnel losses. And there has been no more consistent winner recently in the Pac-10-aside from USC, of course-than Oregon State.

The article addresses the QB situation,

"I've said all along that we are blessed to have two veteran quarterbacks who can lead this team to success," Riley said.

and then gets around to the matter of Quizz, who, as the entire Pac-10 knows, is a "pretty good option".

No matter the QB, there's as pretty good option in the backfield in sophomore tailback Jacquizz , the league's top rusher and offensive player of the year in 2008-as a freshman. Rodgers has a terrific sense for finding seams and hiding behind his blockers, and his low center of gravity makes him difficult to corral. 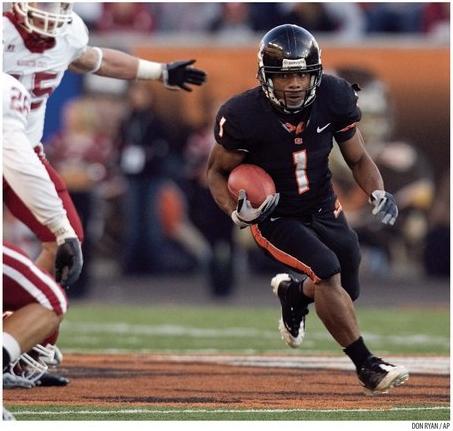 In addition to the team review, there is also a featured interview with Keaton Kristic, and the oft-published best photo of the Beavers' best LB from media day also appears on page 25 of the Sporting News Today. 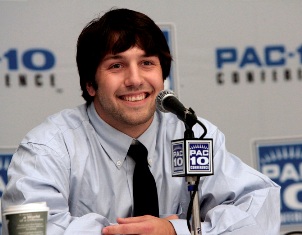 Kristic also was heard Monday on the debut of this year's Joe Beaver show on KEJO 1240-AM, in an interview with Mike Parker. The Joe Beaver shows aren't streamed live, but are all available for podcast, including Monday's season opener.