Share All sharing options for: Kavanaugh Gets $, Catchings Catches A (Bad) Break

The latest biggest news from the Valley Football Center consists of two items, one good, one, not so much.

First, the good news. Graduated senior receiver Taylor Kavanaugh finally has received a scholarship. The Lincoln High grad, from Portland, has also graduated from OSU after spring term, with a degree in construction engineering management, but is currently working toward a second degree in civil engineering while also working on special teams and the Beaver's offense.

Kavanaugh has worked out of all three of OSU's receiving spots, but has primarily made his mark on special teams. This will be his third season as the team's holder, and is also the Beavers' only experienced punt returner.

"Taylor Kavanaugh was awarded a scholarship, and we were proud to do it. It is obviously well deserved," head coach Mike Riley said. 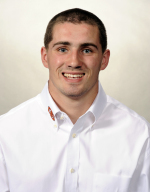 The bad news is that another receiver, first team wide receiver Darrell Catchings, is injured. During a blocking drill during Saturday's evening practice, Catchings was hit from behind. As a result, he jammed his wrist into a defender. The result was a small fracture.

"It's not anything bad, surgery-wise, not that that means I know how long he's going to be out," Riley said. "We need to find out how long we need to prepare for this. I'm just hoping it's not too long. We can make some adjustments right now and then slide him back in without making too much commotion."

Catchings saw the doctor today (Monday) for a further evaluation, after X-rays revealed a small fracture.

Catchings' bad break was one everyone hoped would not be not too bad, one that would mean he would be out about 4 weeks, and probably miss both the season opener against Portland St., and the trip to Las Vegas.

As a result, true freshman Markus Wheaton may have caught a good break. The speedy receiver moved from being behind James Rodgers at flanker out to split end.

"We're going to put (Markus Wheaton) over there a little bit and kind of spoon-feed that (position) and try to maintain what we have besides that."

Wheaton who had already attracted some attention in first week practices, immediately impressed during practice, with an over-the shoulder catch, and a stop-on-a-dime route on the sideline.

Wheaton also stands to see some time as a punt returner once the season starts because of his blazing speed, so much that practice-watchers are wondering if he can beat James Rodgers in a foot race. And there will be no redshirt for Wheaton, according to Riley.

"We have to get him ready. I don't want to not redshirt him, and then not play him.''

Late word suggested, however, that Catchings had indeed caught a bad break, as OSU sports information director Steve Fenk advised Monday night that it appears Catchings will have surgery this week, and would probably be lost for the season.

In the silver lining department, Catchings fortunately still has a redshirt year available, and will be able to retain his two remaining years of eligibility.