No one blinks at 'Quizz, Including the Maxwell Club

Share All sharing options for: No one blinks at 'Quizz, Including the Maxwell Club

Day 5 was the first day in full pads, and the day of the much anticipated "first hit" on the Beaver's star running back Jacquizz Rodgers.

"I don't think anybody blinked," Coach Mike Riley said. "I know he didn't."

Riley said he didn't put any limits on what Quizz could do.

"Believe me, I've thought a lot about that. "I'm not going to hold him back from getting ready to go. We are not tackling right now, but you're going to get hit. He's been deemed 100 % by everybody, and we have got a lot of opinions on that. So I feel strong what the doctors think about it. I'm think right now for his sake, he just needs to practice like we do, which is pretty physical.

"I don't know about scrimmaging right now though. I don't know if I'll let him scrimmage full speed. I don't think I would want to watch." 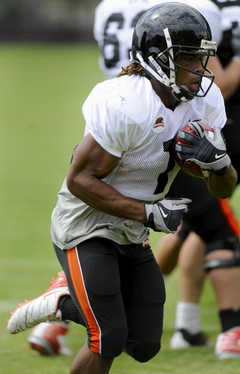 Quizz, after taking several solid shots on his shoulder, pronounced himself fine.

"I didn't feel anything. My shoulder is good. No problems. I was injured back in November; if it hasn't healed my now, it's not going to heal."

The Maxwell club didn't blink either, naming Quizz as one of 8 Pac-10 players, and 55 nationwide, to make their watch list for the national player of the year award.

The other names from the Pac-10, most of which have joined Quizz on most other lists for nationwide awards, include:

Quizz's constant motion was in game form, as seen in video from "Reese TV". John Reese posted a YouTube Video that Paul Buker wrote about that is blurry, but gives a good idea of just how much of a blur Quizz is for opposing defenses.

"One of the best things he does, even if the play is stopped at the line of scrimmage, he never stops. He keeps going, and he makes every player on the defense keep playing. He keeps making moves on guys all the way down the field. I really think that is great for everybody.

While Quizz is practicing his moves, the Beaver's defense has to practice reining him in.

"It's really good for the defense, too," Riley feels.

The elder Rodgers brother, WR James, wasn't quite so fortunate, missed practice with a sore right knee. Coach Mike Riley said the Beavers would be cautious with the elder Rodgers, who starts at flanker and returns kicks.

"I'd rather let what ever is bothering James' knee settle down than push it too fast."

As a result of the injuries, true freshman Jordan Poyer out of Astoria stepped in on defense, and had a break-up and a multiple interceptions. 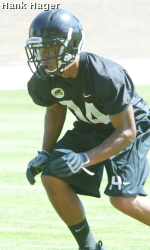 "Jordan Poyer is just an athlete. He's a heck of a baseball player, and a basketball player. All those athletic instincts are there. And he's got good ability. I think he made four interceptions today in the course of practice. And this is what, his fifth day of practice?"

Another true freshman turned heads as well, as Marcus Wheaton worked at length with the first unit offense, as Riley has to figure out whether to redshirt or unleash his talented newcomers. 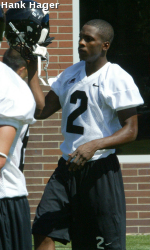 "Markus doesn't know what he's doing out there yet, but whenever he does something and gets the ball, it's pretty impressive," Riley remarked after practice. "He is very talented. The question will come, 'are you going to redshirt him or not.' It's too early to know. But he's got a lot of ability. He's very fast. We'll take a good look at that too."

It wasn't just the new kids that had a good practice though, as WR Darrell Catchings had the best catch of the day when he stretched out to snare a pass with one hand.

In other Pac-10 news, California, led by another all-everything RB in Jahvid Best, and QB Kevin Riley from Beaverton, is previewed by the Sporting News, and is #21 in their pre-season ratings. (Hint, the Beavers will be inside the top 20, as Texas Tech is in at 20.

Things aren't looking so good for Arizona, though, as first team all-Pac-10 TE Rob Gronkowski is out indefinately, with a strained back, as reported by Ted Miller.