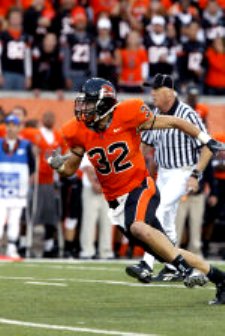 Oregon State senior linebacker Keaton Kristick is one of 56 players on the watch-list for the 2009 Chuck Bednarik Award, and one of nine from the Pac-10 to make the list.

The Bednarik award is presented by the Maxwell club to the nation's top defensive player.

The other Pac-10 players:

It's the second list Kristic has made this year, having also been named to the 42 play watch list for the Ronnie Lott award, presented to the "Defensive Impact Player" of the year.