Sam Gaviglio proved to be one of the biggest surprises on the Oregon State roster this season. He seemingly lead the team in wins from early-on in the season, even though he never really fit into the starting rotation. But by the time that the post-season rolled around, Same was the most reliable arm in the bullpen, and figures to be a big part of Oregon State's pitching staff next season.

We didn't know much about Sam coming into the year, except that he was a stellar pitcher at Ashland. He lettered three years for head coach Don Senestrero, and went 13-0 during his senior year, finishing off the year by defeating Thurston in the 5A State Championship Game. He would later be named the 5A

Sam won 10 games for the Beavers this season, setting what is believed to be a school record for the most wins by a freshman. He went 10-1, winning his last seven decisions, including the opener of the Fort Worth Regional. Gaviglio's 2.73 ERA was the best amongst the team's starters during the season.

The Positives - The major reason why Sam became one of the Beavers' go-to guys was because of the simple fact that he could throw strikes. Sam was the most consistent arm in the bullpen-- when Pat Casey and Nate Yeskie turned to Gaviglio, they knew what they were going to get.

Not only did Sam throw strikes in his freshman campaign, he kept a brisk pace on the mound and was phenomenal at drawing ground balls.

"I never really look at Sam and don't really have to say a bunch to him, because he's in his own zone," OSU first baseman Jared Norris told the Oregonian earlier in the month. "He knows what he has to do, and you count the number of pitches on one hand that he throws above the belt during the game.

"Being a freshman, that's awesome. He's in his own little world, getting 28 groundballs a game and it speeds up the game."

Sam was rewarded for his stellar season, as he was named to the All-Pac-10 Honorable Mention squad and earned Freshman All-America First-Team by Louisville Slugger, the NCBWA and Ping! Baseball.

Gaviglio is playing his summer ball this season in Corvallis with the Knights, where he has started two games. He's struck out twelve and given up just seven hits in thirteen innings of work, and has only walked one batter. He's joined by Oregon State teammates Brent Warren, Carter Bell, and James Nygren on the Knights roster. 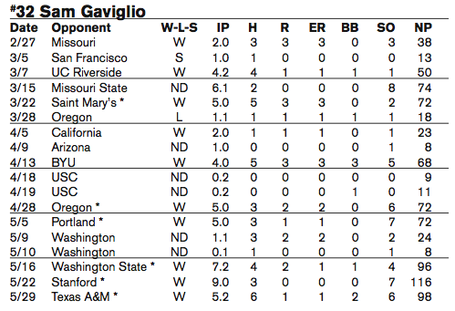 Note that Sam didn't lose a game after the first month of the year.... and the only one he lost was the heartbreaker against Oregon at PGE Park.

The Negatives - Negatives aren't easy to find with Sam. He did what was expected this year and then some-- he really emerged as a reliable starter late in the season, but the reality is he was pitching well and getting wins early on in the season as well. This summer, he can always work on getting a better command of his pitches and continuing to attack the strike zone-- he has set the bar high for himself for next season.

Gaviglio has the potential to be the "rock" of the pitching staff next season. What I mean by that is he has the abililty to pitch consistently on a day-to-day basis where other guys are more suspect to falter and struggle in a given week. Sam is a guy who can be relied on consistently to throw strikes and get ground balls, which should make him a stabilizer next season-- a guy who maybe becomes a Saturday or Sunday starter, but if not, comes into relief with big games on the line and gets the team out of jams.