Share All sharing options for: Fort Worth Regional Scene Set, Two Days In

The Beavers were in great position after winning their first round game against Texas A&M, just one win away from ensuring themselves a spot in the regional championship game. However, after dropping their second round game to regional-host TCU, the Beavers are not out of the tournament, but they've made it hard on themselves. 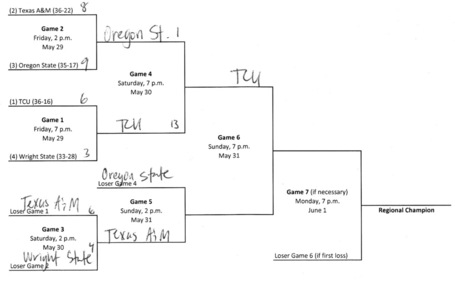 Here's the the way the tournament has gone so far: (Games in chronological order)

[NOTE: Click on the bracket to the right for a larger, more legible, version.]

Getting nine hits in the first four innings and five and two thirds innings of great pitching from Sam Gaviglio, the Beavers were able to build a 9-1 lead by the sixth inning. After the Oregon State coaches went to the bullpen, however, the Aggies began charging back, scoring four runs in the seventh to tighten the gap. In the bottom of the ninth inning, with closer Kevin Rhoderick on the hill, Caleb Shofner hit a three-run homer to cut the Oregon State lead to just one run, but it would be enough, as Rhoderick would strike out Adam Smith to end the game. The win set up Oregon State with a matchup against TCU in the winners bracket, while Texas A&M fell down to the losers bracket, where they drew a matchup with Wright State.

The top-seeded Horned Frogs would get seven innings of seven-hit baseball from their starter, Paul Gerrish, as the Horned Frogs took advantage of freebies given to them by Wright State to ultimately win 6-3. Gerrish's three runs all came on a home run in the third inning by Wright State left fielder Casey McGrew. It was McGrew's seventh home run of the season, and it put Wright State on top 3-1 at the time. TCU came back however, taking advantage of the ten walks issued by the Wright State pitching staff, setting up a second round match-up with Oregon State.

After trailing for much of the game, Texas A&M made a late inning surge against fourth-seeded Wright State to avoid elimination and set up a re-match against Oregon State in the Fort Worth Regional losers bracket.  After starter Ross Hales struggled, giving up four runs and ten hits in his four and a third innings, Kyle Thebeau came on in relief to throw six and two thirds of scoreless baseball. It would ultimately give Texas A&M's offense time to get going, which produced the win. A&M's two runs in the top of the ninth inning broke a 4-4 tie.

In what, to me, was the most bizarre game of the tournament, Oregon State could not find their offense as TCU exploited OSU starter Tyler Waldron and reliever James Nygren. The Beavers, who had only lost one game by more than three runs all year, didn't get a hit until Joey Wong singled in the sixth inning. He would later score the lone run of the game for Oregon State via OSU's second of three hits on the game from Jared Norris. The Beavers haven't been an extremely potent offensive club this year, but never before had we seen them so stymied by pitching that wasn't phenomenal by any means.