Share All sharing options for: RVM's Regular Season in Review: Part One 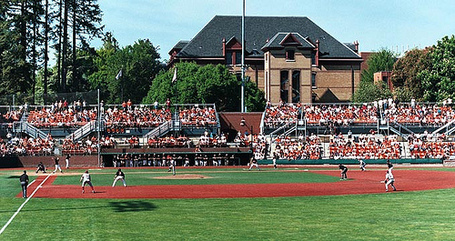 The regular season is over and the Beavers are moving on to the post season.  As such, I thought I would post some of my thoughts about the season.  As you all might have realized baseball is my favorite OSU sport, and as always these are just my fan thoughts (with maybe a stat thrown in here and there for good measure).  I very much welcome anyone else's thoughts, and here's to many more baseball updates for the next month!

Compared to last year it was an improvement overall.  But at the same time some of last year's issues seemed to come up again, such as the problems with LOB and end of the season poorly played conference series.  This year though, I really thought the Beavs showed a better skill for bouncing back from poor showings early on.  I also felt much better in finishing off those early/mid week games such as BYU, Oregon, Portland, and Gonzaga.  Those games really seemed to kill us last year.  But still can't take care of USC and WSU!  And the way the team ended the Pac-10 season was a disappointment, except for taking the Stanford series on the road.  But don't want to focus too much on the negatives for this was a very solid year overall with some pretty exciting moments. 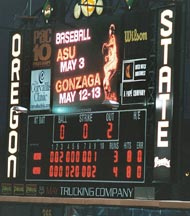 Highlights:  1)  ASU series, with a couple great Pac-10 programs going at it for three hard fought games, and it was especially satisfying in that we won two of them; 2) Waldron's complete Gonzaga pitching performance; 3) Reyes 11 K performance against Hawai'i; 4) Ortiz's offensive performance after a sluggish start, 5) the double W grand slams (Wong versus Utah Valley and Wallace versus Oregon); and 6) Gaviglio's complete game shutout on the road against Stanford in game one (this guy is a Freshman!).

Concerns:  1) Except for the ASU series the Beavs never did really beat a top notch team this year, and now most teams in the post-season are going to be high caliber teams, thus leading to this next question:  2) Can the Beavs put together well rounded pitching and offensive performances in the post-season? 3) Is Ortiz coming back?

Hmm, and that was exciting for what reason?:  The renewed Civil War in baseball just did not really grab me as much as I thought it would.  I guess the Portland and Salem games were awesome in bringing in the fans, and it was an excellent performance by Reyes in game three.  But I don't know, having one team outplay the other by 43 to 11 runs just got a bit old after awhile.  I mean the most "exciting" game was the extra inning UO win, but really that game was just a really poorly played one.  I know, I know, the Beavs came out on top (5 games to 1) and I should feel great about that all, but in the end it just seemed like it all went a bit overboard in scheduling the games and milking this renewed Civil War.  With that all said here's to better Civil War games in the very near future!

"Okay, Gang, Let's split up and search for clues!":  The clues were hidden there in some dominating performances (Tennessee 14-4, Northern Illinois 23-7, Utah Valley 7-0 & 17-2, Oregon 10-2 & 14-4, and ASU 10-5), but just what happened to the offense this season?   At times it either disappeared into the swamp or seemed to be peeking out from behind the grandfather clock at us, taunting us to discover who this team really could be.

Almost last but not least:  Lots of young talent on this team and even though this year was frustrating at times there is still lots to look forward to in terms of the future of Beaver baseball.   Plus, there were a lot of fun highlights to the regular season and it's not over yet.

Last but not least:  Congratulations to Pat Casey on reaching the 500 win milestone!  It has been a pleasure following the success Coach Casey has instilled into the baseball program here, and I'm looking forward to many more wins.

Thoughts about the offense after the break!  And watch for Part Two to be posted Wednesday morning. 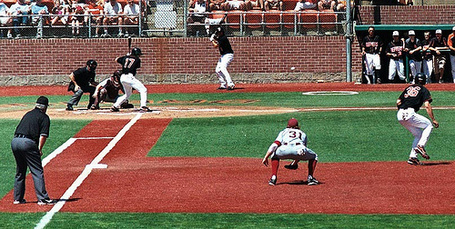 As noted previously, the offense this year sure became an interesting, and frustrating, mystery.  The team was really wowing me at the beginning of the season with the two new bats in Romero and Santos complementing the hard hitting veterans Wallace, Norris , and especially Ortiz.  What was especially impressive was how strong the entire order was hitting, and also how well the team was hitting when Ortiz had his slow start.  It was great to see players such as Tommasini, Kahalehoe, Folsom, Carter, and Miller belting out key hits, many times extra base hits, to break open games. 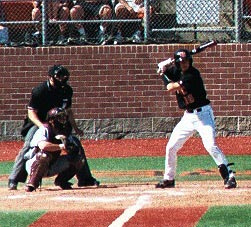 But then things changed and the hitting started to go flat as the team got deeper into conference play.  I don't really have an idea why, I guess Pac-10 play is much tougher in terms of pitching quality, but the Beavs also played against some top-notch pitchers such as Oklahoma State's Andrew Oliver and did fine (scoring 3 runs on 6 hits against Oliver).  What was interesting was how Ortiz really took off later in the season and really was spectacular at times, but then others in the lineup lost their touch.  You could really see how this mystery stumped also the coaching staff in the changes made in the lineup later in the season.  The moving of Miller and Wallace all around really highlighted this to me.  But the Miller change sure paid off at the end with such hitting performances as his 3 for 5 against Stanford in the key Friday game in an important series.

So let's take a quick moment and talk about the LOB/RISP stat for the season, which was 455.   I know that earlier on I was one to take a stance that this was not a huge issue, but will admit it did come around to haunt the Beavs and cost them some much needed wins (against USC, UCLA, UW, and especially WSU).  Let's take the third WSU game and the Beavs had a great chance to put it away with a bases loaded opportunity in third, but did not score more than two runs with one out and one run was due to a walk.  The game wasn't all that bad in terms of LOB with only six, but these little things added up to losses such as happened against WSU in both of the Ls.  It will have to improve if the Beavs want to advance far in the post-season.  But at the same time when the bats were going it was magical to watch those 4, 5, 6 run innings and throw this in with the strong defense and some good pitching this team could be, and at times was, unbeatable.

In conclusion, the offense really summed up the season for me.  The mystery of how so much talent could be so hot and cold just was baffling at times.  I still think this is one of the best hitting OSU teams in recent years, but just never seemed to get that at the plate leadership (even with Ortiz batting .343) to ignite the entire lineup.  I also thought that with some non-aggressive base running this team lacked that edginess of 2006 and 2007 where they just put a lot of pressure on pitchers and infielders.  I'm not even really thinking about stealing either, but more of the small ball mental games those championship teams excelled at with bunting, stealing at the right time, giving pitchers different looks on the base paths, etc.

I do really think this team has the talent to be a very dangerous offensive team, but time is running out on 2009 to show college baseball the aggressiveness that seems dormant right now.  But to me it is a sleeping tiger that I think can be woken up with some very strong bats all through the line-up, just ask ASU or UO!

The team offensive totals for the year ended as this: 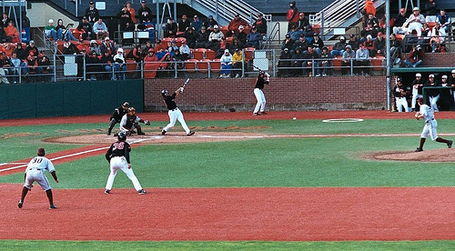