Share All sharing options for: Ryan Ortiz named Pac-10 player of the week 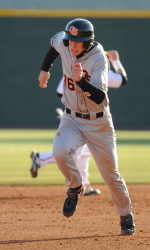 For his strong play against Cal last week Ryan Ortiz was named the Pac-10 Baseball Player of the Week (full story here).

Ryan went 6 for 12 with four RBIs, and had hits in every game with the highlight in game three where he had walk-off winning hit against Cal in the 11th inning.  With this strong play (along with what I also saw as solid defensive play behind the plate) he helped lead the Beavs to their first sweep over a Pac-10 team since 2006.  Ryan's slugging percent was .667 and his on-base percentage was .571.

He has struggled a bit on offense this season, but when at home leadership was needed he stepped up nicely and I look forward to his continued leadership and improvement on offense!